The use of supplemental oxygen in acute medical care is perceived beneficial by many health care professionals. However, current guidelines limit the excess use of oxygen after successful resuscitation following cardiac arrest. This recommendation is based on studies that showed, that too much oxygen is associated with increased mortality and worse neurologic outcome in survivors. Little is yet known however if a high oxygen concentration in the blood is harmful to hearts suffering from significant blockages of their blood vessels. Oxygenation-sensitive cardiovascular magnetic resonance (OS-CMR) is a non invasive technique that can measure changes of the actual oxygen content of the heart muscle. OS-CMR does not use any radiation or contrast agent.

In an animal model (8 pigs) we created a significant blockage of one of the main arteries. 11 pigs were used as control animals. After transferring the animals to a state-of-the-art MRI machine, we measured blood flow in the partially blocked artery and the used oxygenation-sensitive MRI to measure changes of oxygen in the heart muscle as well as contractile function. Afterwards, pure oxygen was given in order to increase the oxygen pressure in the arterial blood from a normal value of 100mmHg to more than 300mmHg. We then repeated the measurements of blood flow and oxygen in the heart muscle tissue. 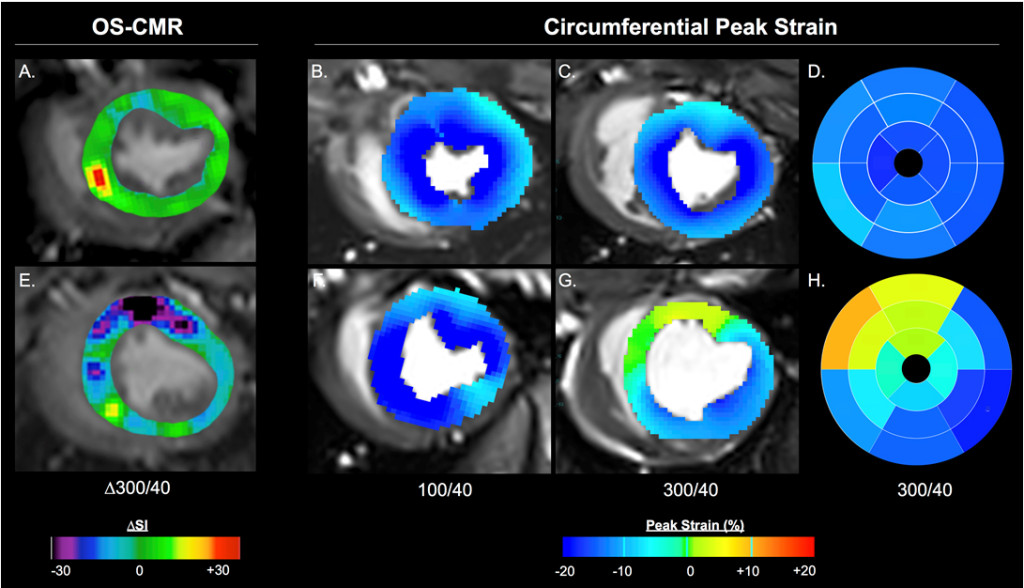 Changes of actual oxygen contents in the heart muscle tissue during administration of highly concentrated gaseous oxygen in a control animal (A) and in an animal with a severe blockage of a coronary artery (E). The black area reflects a regional severe drop in tissue oxygen during inhalation of pure oxygen. Contractile function was similar in control animals (B) and in the animal with blocked artery (F) during normal oxygen levels in the blood. During inhalation of pure oxygen however, the animal with a blocked artery showed a decrease in contractility in the same region, displayed as yellow/orange (G). This was not seen in the control animal (C and D). H: Result when displayed as a segmental model.

In the animals with blockages, we found a significant drop of the blood flow in the artery after increasing the oxygen concentration. Myocardial oxygenation on the other hand did not change in other regions of the heart or in control animals. The figure shows result images, acquired as a cross-sectional cut through the mid portion of the heart. The top left panel displays a colour-coded result map for oxygen concentration changes in a control animal, with a similar response across all regions. In contrast, there was a significant drop of the tissue oxygen during application of pure oxygen (visible as a darker region on the top of the ring-like heart muscle) in the animal with a partial yet significant blockage of a coronary artery. Even though oxygen was supplied in excess, it could not compensate for the decrease in blood flow in the blocked vessel. The decrease in the tissue oxygen in the territory of the abnormal artery was accompanied by an abnormal function in the same region that was not seen in other areas or in control animals. The impaired function in the same region indicates that the drop of the actual tissue oxygen caused by the excess administration of oxygen in the presence of a severe blockage of a major coronary artery was severe enough to affect contractile function.

This is the first study to show that excess administration of oxygen in the presence of a severe blockage of a coronary artery likely is not beneficial for the actual oxygen supply to the affected heart muscle. Not only does a very high oxygen concentration reduce blood flow, but paradoxically also leads to an actual drop of oxygen supply with associated contractile dysfunction. If these results are confirmed in humans, the role of excess oxygen administration in patients with suspected blockages of coronary arteries will likely have to be revised.