Remnant lipoproteins (RLP) are the TG-rich lipoproteins metabolized by lipoprotein lipase (LPL) and increase in plasma after fat intake (Fig. 1), parallel with the increase of plasma triglycerides (TG).

We have long thought that RLP in plasma are significantly increased as the result of disturbed TG-rich lipoprotein metabolism (reduced LPL activity) followed by obesity and insulin resistance. Therefore, it has been believed that insulin resistance basically causes and enhances plasma RLP formation. 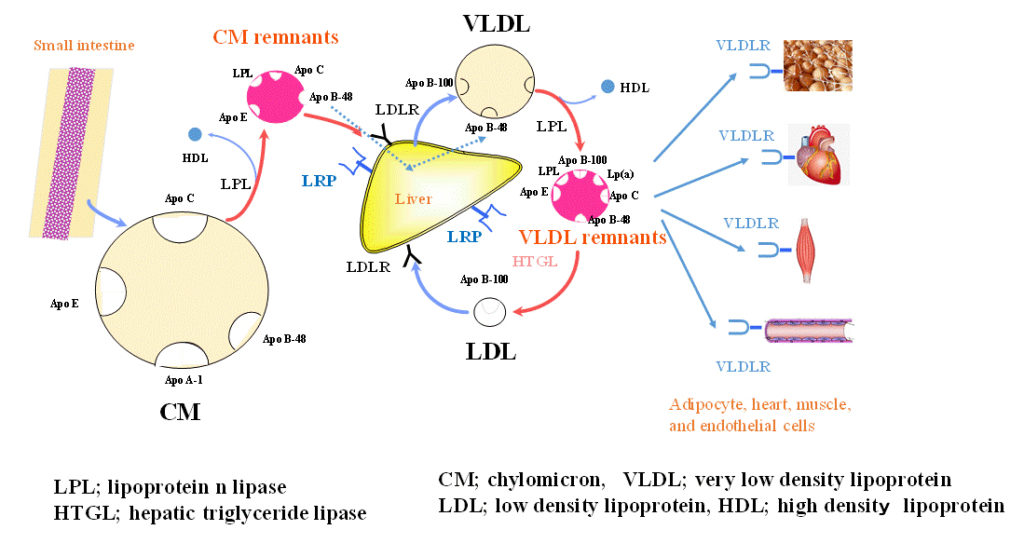 Fig. 1. Metabolic pathway of postprandial lipoproteins after fat intake. The intestine secretes CM, the triglycerides of which are lipolyzed by LPL. The LPL reaction constitutes the initial process in the formation of CM remnants. CM carry LPL as a ligand for the CM remnant receptor in the liver. CM remnants bind and are internalized in the liver and reformed into VLDL including apoB48. VLDL triglycerides are lipolyzed by endothelial-bound LPL and VLDL remnant particles are formed. The final VLDL remnant composition carries apoB100, apoB48, LPL and Lp(a) and other ligands, and is modulated by the cholesterol ester transfer protein (CETP) reaction with HDL and hepatic lipase (HTGL) as well as the exchange of soluble apolipoproteins such as C-I, C-II, C-III and E. The great majority of the remnants are removed from the plasma by VLDL receptor-mediated processes. The principal receptors for CM remnants are the LDL receptor and LRP (LDL receptor related protein) in the liver, whereas the VLDL remnants are more likely to bind and be internalized by the VLDL receptor in the peripheral tissues such as the heart, adipocytes, muscle, brain and endothelium.

However, the increase of RLP in plasma is the first step of lipoprotein metabolism right after fat-rich meal intake as increase of blood sugar after glucose intake (Fig. 2). Therefore, we concluded that RLP increases in plasma regularly as a part of TG increased after fat intake and the continuous increase occurs before obesity and insulin resistance as the results of excessive intake of dietary fat. The majority of plasma TG increased after fat intake is TG in RLP (RLP-TG). The postprandial RLP has been shown as VLDL remnants, not CM remnants, revealed by significantly high ratio of apoB100/apoB48 and high   similarity of the particle size in RLP. Also it has been long recognized that RLP in the postprandial plasma contain CM remnants (exogenous remnants; RLP-apoB48) and VLDL remnants (endogenous remnants; RLP-apoB100) of different origin, i.e. produced in the intestine and liver, respectively. However, the majority of CM remnants after fat intake is known to be incorporated into liver from the circulation within a very short time (8-15 min) and are degraded in liver and may be reused for the remodeling of VLDL. Namely, the most of the apoB48 in CM remnants are quickly incorporated into the liver after fat intake along with lipids and other apolipoproteins via the LDL receptor and LDL-receptor-related protein (LRP). Subsequently, apoB48 may be reconstituted in VLDL as VLDL apoB48 through an unknown physiological pathway similar or the same to that of VLDL apoB100 formation in the liver and secreted into the circulation as VLDL apoB48 to form their remnants. Because those particles are newly reconstituted in liver as a portion of VLDL, we proposed that both RLP-apoB100 and RLP-apoB48 are endogenous VLDL remnants produced in liver after fat intake. Also we predicted the presence of a new pathway for the formation of VLDL apoB48 after fat intake along with VLDL apoB100 in liver in humans similar in mice and rats.

RLP is newly produced lipoproteins derived from liver after fat intake primarily for energy delivery to peripheral tissues, like blood sugar after carbohydrate intake. Since RLP bearing apoE, LPL and Lp(a) as ligands for the VLDL receptor, RLP interacts with VLDL receptor in visceral fat adipocytes and stored as TG, similar to excessive blood glucose. The excessive VLDL remnants in circulation promote the enlargement of visceral adipocytes (obesity) and induce its associated insulin resistance, which plays a major role as the initiator of metabolic domino effects (Fig. 2). 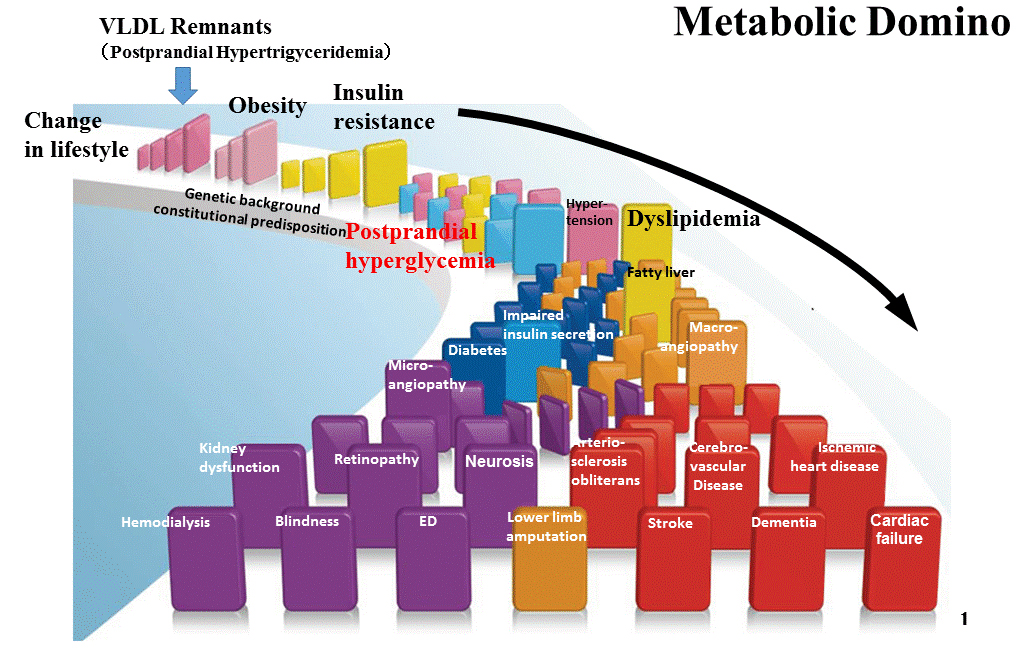 Therefore, a new concept to account for the metabolic process of postprandial remnant lipoproteins is proposed based on the characteristics of lipoprotein particles and their receptors. The VLDL receptor was discovered as a receptor for TG-rich lipoprotein metabolism and is located in peripheral tissues such as skeletal muscle, adipose tissue, heart, endothelium, but not in the liver. Postprandial remnant particles are strongly bound and internalized into cells expressing VLDL receptor. The presence of various specific ligands in VLDL remnants may enhance the capacity for binding to the VLDL receptor in peripheral tissues. Excessive and continues VLDL remnants from food intake could be a major initiator of atherosclerotic diseases followed by obesity and insulin resistance (Fig. 2).