Moderately intense physical exercise, performed at regular intervals, is now firmly recognized as a safe and effective intervention by which to enhance quality of life. Despite this awareness, for many of us, as our age increases, so does our BMI. The statistics are alarming. According to the World Health Organization, in 2014 more than 1.9 billion adults were overweight with 600 million adults considered obese. Sadly, obesity is not restricted to the adult population. In 2013, 42 million of our children under the age of 5 were considered overweight or obese. Of equal concern, obesity, secondary to a sedentary lifestyle, is a marked independent risk factor for the development and progression of several subacute or chronic diseases. 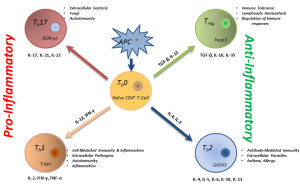 In general, acute bouts of exercise are frequently associated with enhanced pro-inflammatory signaling, as measured by induction of macrophages (M1), CD4+ T cells (Th1), and CD8+ cytotoxic T cells. In this manner, acute exercise is thought to enhance protection against harmful pathogens. Paradoxically, acute aerobic or resistance training exercise programs are reported to significantly decrease the risk and severity of some inflammatory autoimmune diseases. In some subjects, intense chronic physical exercise may actually lead to a collapse of natural immunity, rendering these subjects at risk. The mechanisms by which exercise alters our immune system in the normal, sedentary (non-athletic) population remains enigmatic and is critically dependent on the type, intensity, and duration of physical exercise administered.

The underlying cellular mechanisms by which physical exercise may modulate immune responses remain poorly understood, but may be attributed to changes in the functional status (Th1 vs Th2) of the immune cells (Fig. 1). Proposed as a novel source of anti-inflammatory cytokines, contracting skeletal muscle may shift the balance of circulating monocyte or T-cell populations from a harmful pro-inflammatory (Th1) to that of a protective anti-inflammatory (Th2) profile. Peripheral blood from endurance-trained athletes contains elevated levels of IL-10 and a greater population of CD4+CD25+CD127low T regulatory cells, both anti-inflammatory markers. By comparison, a 30-minute session of aerobic cycling is reported to up-regulate expression of both pro- (TNF-α, IL-6) and anti-inflammatory (IL-4) cytokines, suggesting that acute aerobic exercise may precondition (or prime) Th1/M1 and Th2/M2 immune mediators. 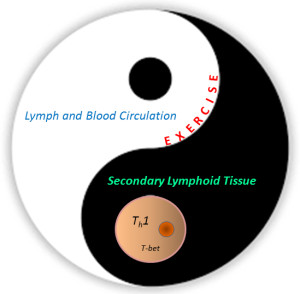 Experimentally, physical exercise has been shown to attenuate development and progression of humoral and/or cellular autoimmunity in animal models of rheumatoid arthritis, multiple sclerosis, Guillain-Barré syndrome, as well as significantly delaying the development neuropathic pain in a diabetic animal model. Preconditioning with exercise was found to elicit a sustained protection against the development and progression of experimental autoimmune neuritis, an established CD4+ T cell dependent rat model of human inflammatory demyelinating neuropathies. An exercise-inducible shift in Th1:Th2 cell bias, however, appears unlikely as the percentage of anti-inflammatory (Th2) lymphocytes and that of cytotoxic T lymphocytes remained unaltered by forced-exercise preconditioning. Alternatively, exercise preconditioning was found to alter autoreactive leukocytes composition and egress from secondary lymphoid tissue (Fig 2).