As youth participation in organized baseball has grown in the United States, so has the occurrence of elbow pain and injuries. This increase is likely related to the development of the physes and increased throwing frequency and intensity. It may also be due to a poor throwing mechanics of pitchers, which likely change as the pitcher becomes experienced. In this study, we investigated biomechanical differences in pitching between experienced and non-experienced pitchers and between pitchers of different ages. 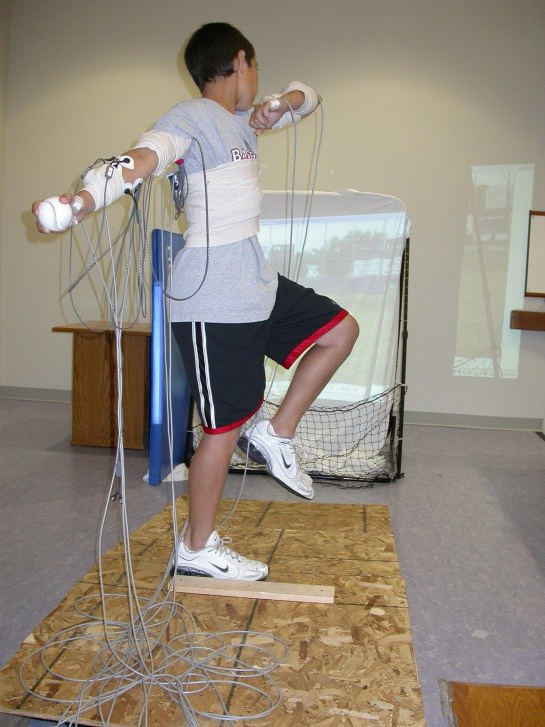 Fig. 1. Wired electromagnetic markers are used to record kinematic data as the pitchers throw into a pitching net.

Twenty-seven healthy male athletes (ages 10-18 years old) participated in this study and were separated to either experienced [18 participants with at least 2 years of pitching experience group (EG)] or non-experienced [9 participants with no previous baseball participation group (NG)]. EG was further subdivided into an older group [10 participants ages 10.25 to 12 (OG)] and younger group [8 participants ages 15 to 16.25 (YG)].  Electromagnetic markers were attached to each participant to measure kinematic data, with the orientation of the markers measured with respect to the other markers. Participants pitched multiple trials aiming at a portable pitching mound, and kinematic data was recorded through an electromagnetic tracking system (Fig. 1). We characterized elbow extension, external rotation, and forearm supination as negative motion, while their complements are characterized as positive motion.  The pitching cycle was subdivided into the early cocking, late cocking, and acceleration, with maximum, minimum, and range of motion data being collected for each condition. A Mann-Whitney U test was used to determine statistically significant differences between group characterizations.

NG had a less maximum and minimum external rotation for all three phases, and less maximum flexion for the early and late cocking phases (Fig. 2).  In addition, NG had less total elbow ROM at the sagittal and coronal planes during early cocking. OG had a reduced total range of motion in the transverse plane during early and late cocking phases compared to YG. 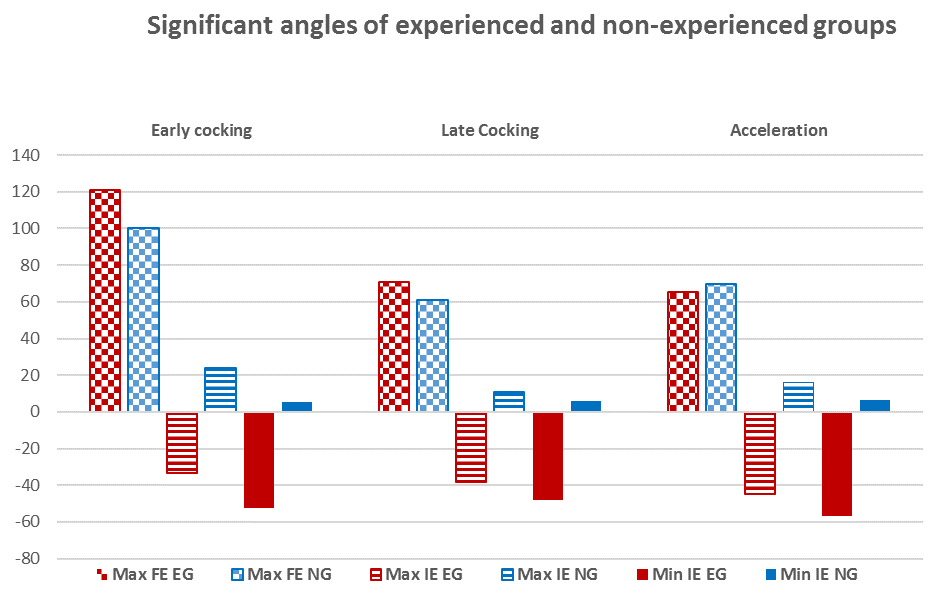 It appears that experience between groups is a more significant factor in the elbow kinematics of pitching rather than age. Higher maximum external rotation angles in the experienced group may increase this group’s risk for injury, as they are likely to hold a larger valgus torque. However, the inexperienced group’s decreased flexion in early and late cocking could increase elbow valgus load, which may be also increase injury risk for this group. Overall, since proper pitching mechanics are likely to be adjusted with experience, it would be useful for continue to focus on teaching improved mechanics to pitchers as they gain experience to avoid pain and long-term injury.