Angiogenesis, the growth of blood vessel from the existing vasculature, depends on the expression of various growth factors but Vascular Endothelial Growth factor (VEGF) ranks as the key inducer and the central mediator that promotes vascular permeability. Because VEGF165 isoform is the major player in both angiogenesis and vascular permeability and the most explored factor in angio-inhibitory therapies many bacterial expression systems have been developed to achieve high yield as well as high quality and functional potency of the VEGF165 protein. The common objective of a successful heterologous expression is generally to balance success rates with speed, ease, cost and breadth of use. The central interest of many works is to optimize production conditions such as shaking speed, medium, induction temperature, IPTG concentration, but the optimization of the protein extraction method remains a major challenge for a high percentage of the produced protein. It is apparent that the methods described here have, in many instances, to be quite similar especially with use of sonication in lysis buffer to extract target proteins. But combining different protein extraction method is not frequently used. Combining lysozyme treatment and sonication in lysis buffer (M5) could increase the level of the soluble VEGF165 (Fig. 1). More interestingly, the consequence of this method is the important clarification of the protein lysate, thereby facilitating the purification of the VEGF165. A single step of purification using affinity chromatography was carried out. 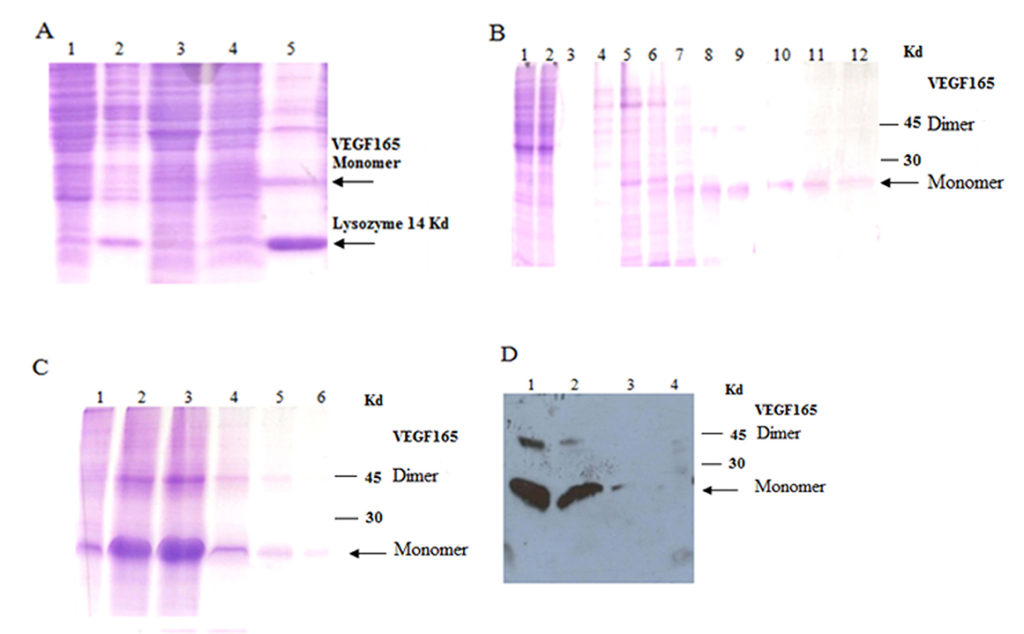 In general, the bacterial expression procedures described resulted in most of cases in the production of insoluble inclusion bodies which represented the primary source of the target protein. With the fact that 30% of proteins from E.coli itself cannot be expressed in soluble form, it is meant that the main limitations of the recombinant protein expression from bacterial cells are the low production levels and low refolding yield of the inclusion bodies, leading to biologically inactive recombinant proteins. A simple procedure using high concentration of urea (8M), 1% of Triton X-100 and β-mercaptoethanol ensure a good amount of soluble and bioactive VEGF165. Solubilisation buffer contained also 1 mM EDTA to prevent metal-catalysed air oxidation of cysteine.

A single step purification of the refolded VEGF165 was carried out using a Nickel affinity column. Similarly to the soluble VEGF165, the refolded protein was eluted at 250 mM Imidazole and detected by anti His-tag antibodies. The batch fermentation process yields approximately 1.5 mg/L of purified VEGF165 from both supernatant and inclusion bodies.

In order to evaluate the functionality of the recombinant VEGF165 we performed in vitro scratch assay employing HUVEC cells because endothelial cell migration is very important in VEGF-associated wound healing. Cells were cultured for 12 h in serum free RPMI medium containing or not 200 ng of VEGF165. Compared with T12h treated cells with 200 ng VEGF165; the non treated HUVEC cells did not significantly migrate into the scratched site under any growth factor stimulation. Images were analyzed for the gap area over time. 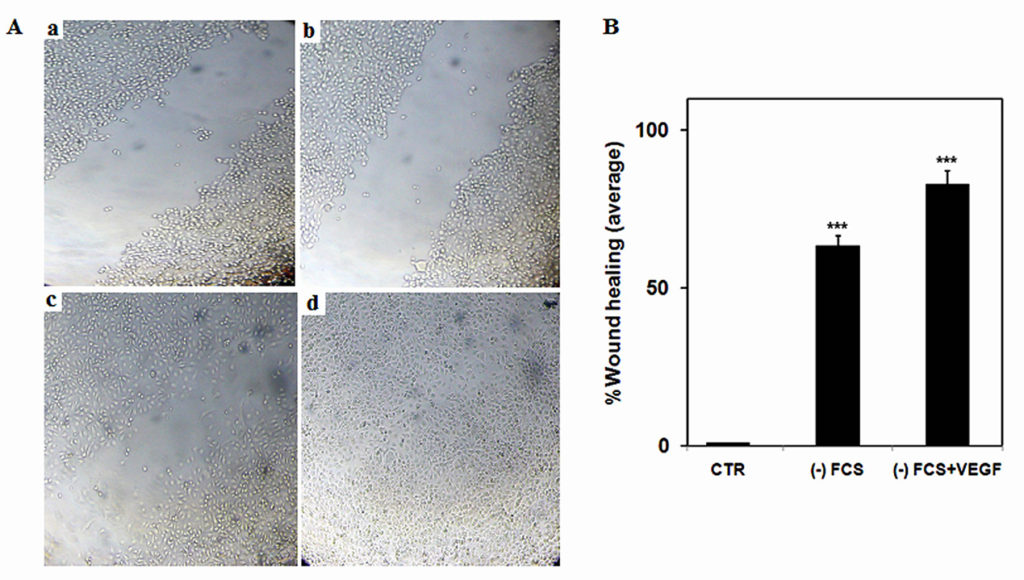 Fig. 2. Cell migration in response to VEGF165. A a The free untreated cell area at T0 h. b The gap area of induced cells at T0 h. c untreated cells at T12 h. d The cell migration in response to treatment with 200 ng VEGF165 at T12 h. B Histogram showing the percentage of wound healing for each condition. Significant differences: *** means p < 0.001