Cytochrome c (CytC) is a protein that is normally located inside mitochondria where it participates in the energy-generating processes of cells. Since mitochondria are essential for life, these CytC-containing organelles are found in most animal cells. The role of CytC in the mitochondrial electron transport chain has long been recognized; however, this protein also performs important functions outside the mitochondria. CytC can be released from the mitochondria into the cytoplasm where it has been shown to initiate and regulate a cell death mechanism known as apoptosis. Recent evidence indicates that CytC can also be released into the extracellular space by damaged or dying cells and serve as an intercellular signaling molecule, possibly alerting the surrounding cells of tissue damage. This extracellular function of CytC in alerting surrounding cells and tissues of cellular damage and death makes CytC similar to members of a diverse family of molecules termed damage-associate molecular patterns (DAMPs). 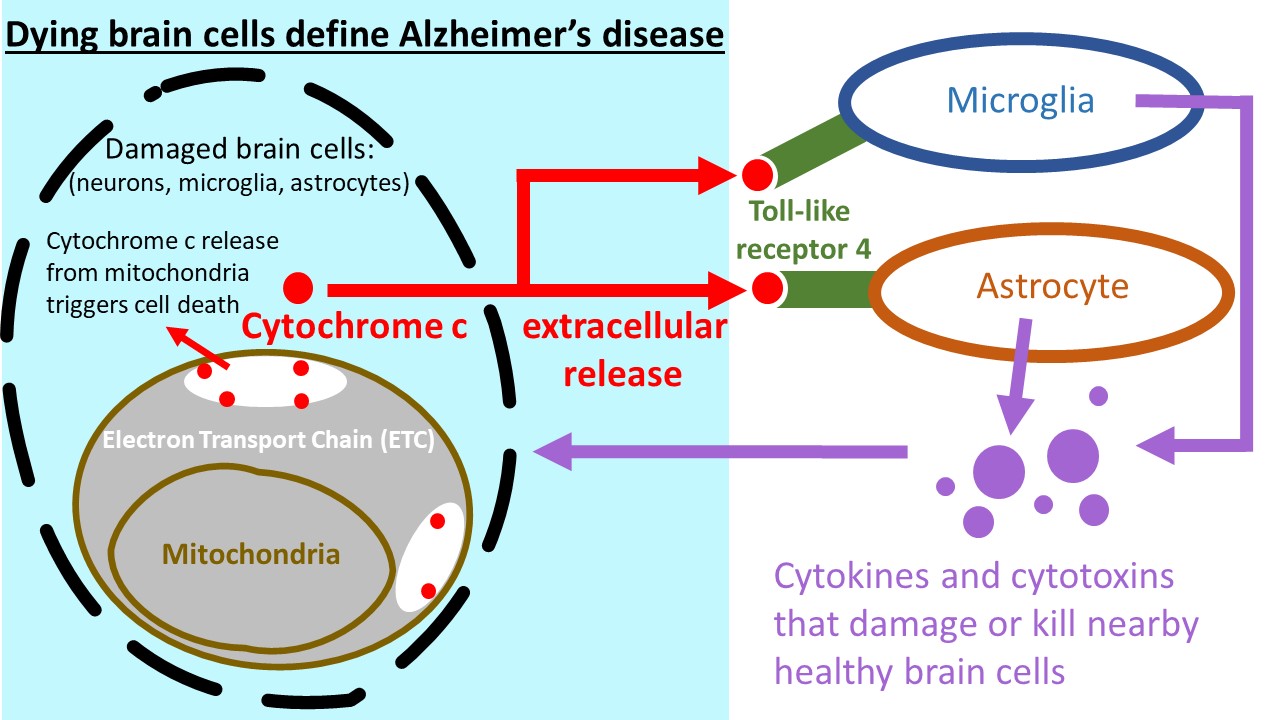 Cell death is an essential process for tissue development and renewal; however, excessive loss of cells can be a sign of disease. Even though CytC may be an important intercellular signaling molecule during various normal and disease-related processes of the central nervous system, very few studies have addressed the potential extracellular role of this protein in the brain. Previous research shows that CytC can be released from cultured neurons, and that its cerebrospinal fluid concentration is increased after traumatic brain injury. Extracellular CytC also upregulates several different functions of microglia, which are the main immune cells of the brain. Our current study is designed to address the following questions: 1) can damaged microglia and astrocytes (another cell type in the brain) release CytC into the extracellular space; 2) does extracellular CytC regulate functions of astrocytes; and 3) which astrocyte cell surface receptors can CytC interact with and activate.

We demonstrate that CytC can be released from cultured human astrocytes and mice microglia after their exposure to toxins, while CytC is undetectable in culture medium from healthy cells. We show increased secretion of inflammatory mediators and toxins by human primary astrocytes and human astrocyte-like cells in response to extracellular CytC. We use receptor-blocking antibodies and a specific inhibitor, TAK 242, to establish that effects of extracellular CytC on astrocytes are at least partially mediated by their toll-like receptor (TLR) 4. This receptor belongs to the class of pattern-recognition receptors which have been implicated as the molecular targets for multiple other DAMPs; therefore, our discovery of TLR 4-dependent effects of extracellular CytC further supports its potential role as a novel DAMP of the brain.