Nature typically strives to minimize the energy of a system. Making water flow downhill and a stretched rubber band shrink when released are just two examples. A commonly experienced consequence of this universal principle is the spherical shape of a liquid droplet. Since creating surface area costs energy, the shape having the minimal surface area for a given droplet volume, a sphere, minimizes the droplet’s energy. Thus, in the absence of external forces acting on them, liquid droplets are spherical, having no facets or sharp edges. 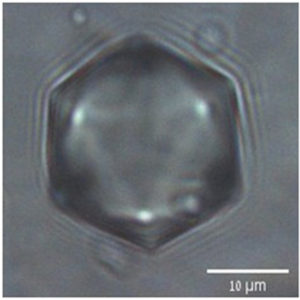 In an apparent contradiction with this general principle, we have recently demonstrated that liquid oil droplets, suspended in dilute water solutions of soap molecules (known as “surfactants”), spontaneously undergo a unique shape transition: the droplets adopt polyhedral shapes, while still remaining liquid. This faceting of liquid droplets, never reported before, is temperature-controlled: the droplets turn faceted upon cooling, but regain a spherical shape upon re-heating. Moreover, each of the different droplet shapes: icosahedra (Fig. 1), tetrahedra, and hexagrams, forms in a different temperature range, enabling mass-production of micron-sized faceted building blocks for future nanotechnology-based materials.

These fascinating shape transitions are driven by a recently-discovered phenomenon, called “interfacial freezing”. For certain combinations of oil and surfactant molecules, a single layer of molecules residing at the surface of the oil droplets freezes  forming a hexagonally-packed crystalline monolayer, only 2nm thick. The droplet’s bulk remains liquid. Amazingly, the elasticity of this one-molecule-thick crystalline monolayer, fully controls the shape of the liquid droplet, comprising ~1015  identical molecules.

The shape transition is driven by two effects: the reduction of the droplet’s surface tension to near-zero values by the interfacial freezing, and the interfacially-frozen monolayer’s hexagonal molecular packing. The former renders the surface-frozen layer’s elasticity dominate over the surface tension. The latter introduces an important topological factor into the game:  hexagonal packing is incompatible with a spherical surface. Put differently, hexagonal tiles can never fully cover a spherical surface: at least 12 pentagonal tiles are also required for full coverage, as demonstrated by a common soccer ball, where 12 pentagonal patches are required to complement the hexagonal ones. In the frozen monolayer at our droplet’s surface such pentagonal inclusions, called “five-fold defects”, stretch and distort the lattice. To minimize the lattice distortion, the defects are maximally separated on the droplet’s surface.  The droplet reduces the lattice stretching energy associated with these defects by distorting its shape into an icosahedron (Fig. 1), with the 12 five-fold defects as vertices. 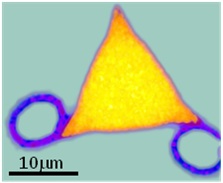 Fig. 2. Liquid droplet of oil in water, with tail-like protrusions emanating from two of its vertices.

Remarkably, the interfacial freezing also dramatically decreases the surface energy. Thus, the energetic penalty for increasing the interfacial area of a droplet by distorting a sphere into an icosahedron is small and the incentive to form spherical droplets is reduced. Moreover, at even lower temperature, the interfacial freezing makes the energy of surface molecules lower than that of the bulk ones, so that droplets tend to increase their surface area by growing
tails (Fig. 2) and by spontaneous splitting.

Our work demonstrates for the first time that the interfacial freezing defies the tendency of droplets to be spherical and merge to larger droplets. Rather, it leads to faceting, tail growth, and spontaneous splitting of liquid droplets. These counterintuitive phenomena, which may play a fundamental role in much more complex biological systems as well, occur here under highly-controllable protocols in simpler systems and allow these, and related, effects to be used in the future in developing controlled drug delivery methods, in self-assembly of complex nanopatterns, and in novel oil extraction technologies.