Family, cholesterol and the genes from the ground up or why screening matters

In 1913, the “cholesterol theory” of atherogenesis was proposed. In the 1930s a genetic disorder, familial hypercholesterolemia (FH), which is associated with elevated levels of low-density lipoprotein (LDL) cholesterol and high risk of heart attack at an early age, was first described. With each pregnancy parents have a 50% chance of having a child with FH; children who do not inherit the abnormal variation in the causal gene (region of DNA) will not develop or pass on the disease. Impaired clearance of cholesterol from the bloodstream is essentially due to pathogenic variations in three genes (Fig. 1). Measurement of LDL cholesterol in children and adolescents, in particular in children aged one to nine years old, followed by targeted identification of a culprit genetic variation in the family is strongly recommended by the current management guidelines. 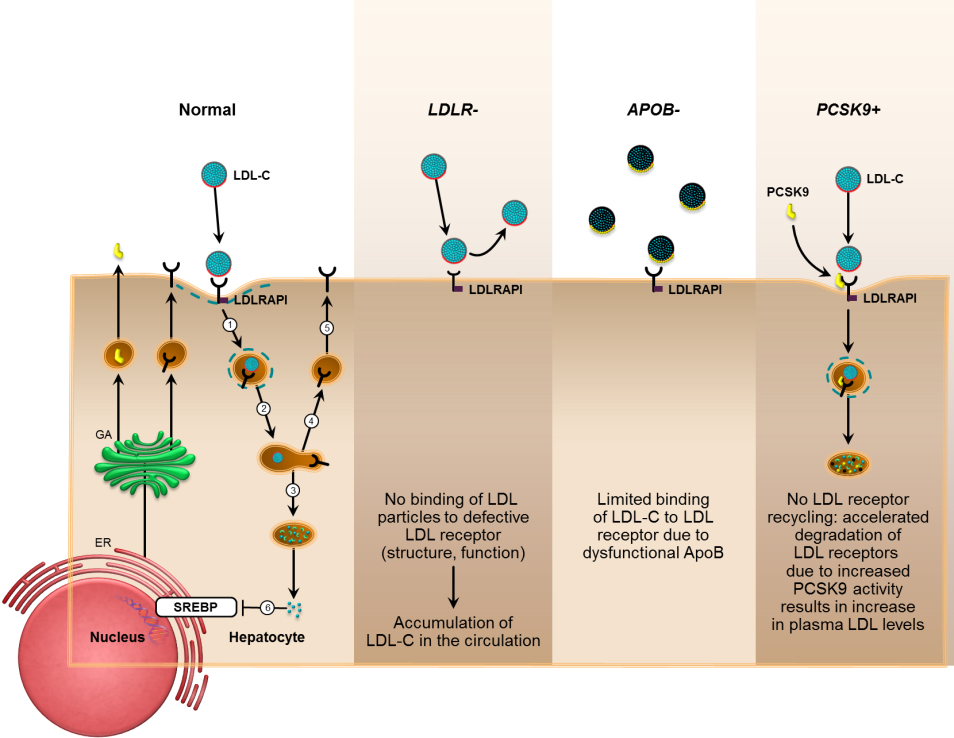 Fig. 1. Basis of familial hypercholesterolemia: impaired clearance of LDL cholesterol due to pathogenic variants in LDLR, APOB and PCSK9. Synthesis, processing, maturation and expression of LDL receptor on the hepatocyte surface maintain intracellular cholesterol homeostasis. Failed synthesis, surface presentation, lowering of the number of receptors expressed on the surface of hepatocyte, defective binding of the atherogenic lipoproteins, – all and each increases circulating LDL cholesterol levels.

In most countries less than 20% of FH cases are diagnosed with less than 1% of patients with FH being aware of their condition, often not until after their first heart attack. A more severe form of FH due to “double gene dosage” (homozygous, compound or double heterozygous) is a relatively rare entity, whereas a fraction of heterozygotes in the general population is one in ~300. The reason for the relatively high prevalence of genetic variants causing FH is not clear, although it is speculated that the variants may have been advantageous from an evolutionary standpoint in past human history. Several criteria are used to make a clinical diagnosis of FH. Personal and family occurrence of early vascular events such as coronary disease, stroke, lower extremity atherosclerosis, depositions of cholesterol under the skin, mainly within tissues attaching muscles to bones (xanthomas), and in the eyes (corneal arcus) along with increased LDL cholesterol levels should prompt further evaluation. LDL cholesterol levels are typically elevated to greater than 90th percentile for age and sex; other cholesterol fractions (high-density lipoprotein cholesterol and triglycerides) are usually only modestly altered. Numerous imaging studies have confirmed an increased atherosclerotic burden in FH which is significantly reduced after initiation of therapies targeting LDL cholesterol. FH patients, in particular those individuals with concomitant elevation of lipoprotein(a), an atherogenic LDL-like particle, and severe FH phenotype, should be assessed for the narrowing of the aortic valve.

Patients with FH and their family members should be managed by a multidisciplinary team. FH patients should be counseled on lifestyle changes, including reduced intake of saturated and trans-fats and cholesterol, using soluble fiber, plant stanol or sterol esters, limitation of alcohol consumption, smoking cessation and regular physical activity, blood pressure and glucose control. Timely initiation of cholesterol-lowering treatment can lower the risk of myocardial infarction in patients with clinical diagnosis of FH to that seen in the general population. Treatment should be started as soon as the diagnosis has been made and continued lifelong. Patient response to treatment varies widely in FH patients and is dependent on several factors, including residual LDL receptor activity associated with each particular pathogenic variant. At Mayo Clinic, a multidisciplinary team approach in the Cardiovascular Genomics clinic that includes cardiovascular specialists, genetic counselors and medical geneticists to managing patients with FH has been initiated with the goal of a comprehensive program customized to personal health needs, i.e. specialized evaluation, genetic testing and cascade screening of family members.