Platelets play a key role in the prevention of excessive blood loss through the formation of a thrombus at the site of vessel damage. Hyper-reactive platelets lead to unwanted, excessive platelet activation and contribute to atherothrombosis that together lead to heart attacks and stroke. Several pathological conditions have been related to platelet hyper-reactivity including hyperlipidemia, type two diabetes, metabolic syndrome, obesity and high cholesterol. 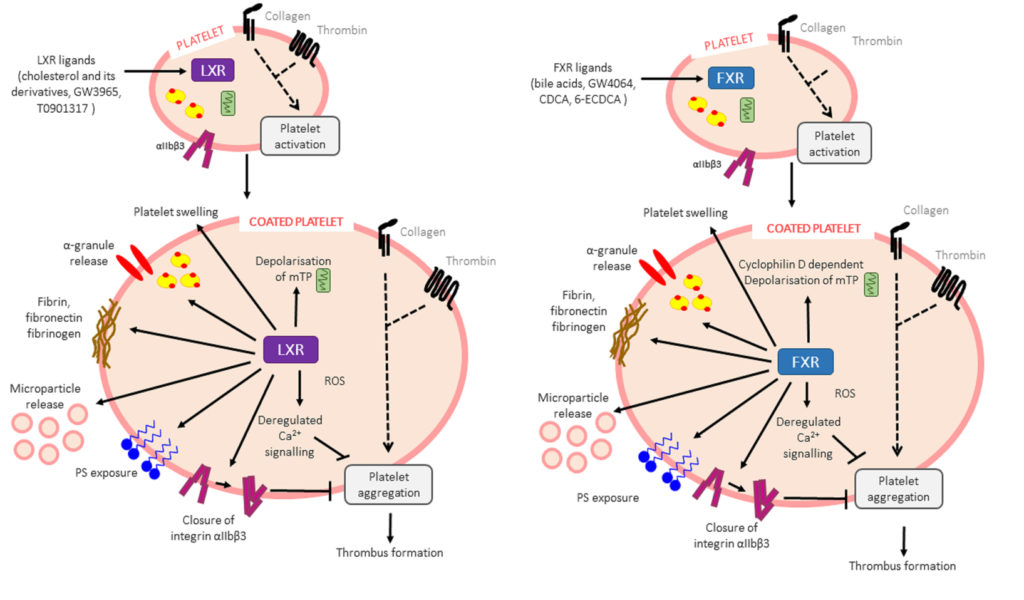 Fig. 1. LXR and FXR ligands initiate coated platelet formation. 1 Exposure to FXR and LXR ligands converts platelets to a procoagulant state characterised by the exposure of phosphatidylserine and α-granule contents on the platelet surface, which is coupled with platelet swelling, depolarisation of the mitochondrial membrane potential, reduced calcium mobilisation and downregulation in the affinity of integrin αIIbβ3, ultimately resulting in inhibition of platelet aggregation.

Formation of procoagulant platelets is one way in which platelets can be classed as ‘hyper-reactive’. Procoagulant platelets expose high levels of phosphatidylserine (PS) enabling them to support coagulation and thrombus formation. One subclass of procoagulant platelets are coated platelets that expose and retain high levels of alpha-granule proteins on their surface including factor V, fibrinogen, fibronectin and von Willebrand factor. Coated platelets are also associated with deregulated levels of intracellular calcium, depolarised mitochondrial membranes, generation of reactive oxygen species, loss of membrane integrity and the release of platelet microparticles. However, despite appearing to be procoagulant and therefore hyper-reactive, coated platelets through closure of integrin αIIbβ3 and other platelet receptors show impaired responses to platelet stimuli reducing their ability to aggregate and form stable thrombi.

The Liver X receptor (LXR) and Farnesoid X receptor (FXR), are recognised for their roles in the transcriptional regulation of metabolic pathways that are disrupted in conditions such as type II diabetes, metabolic syndrome and hyperlipidemia. Both FXR and LXR have been shown to be present and elicit acute non-genomic effects in human platelets. Whilst ligands of these receptors have been shown to inhibit platelet activation, this does not explain the platelet hyper-reactivity observed in pathological conditions that are associated with increased circulating levels of molecules that are LXR and FXR ligands.

We therefore investigated whether ligands for the LXR and FXR receptors were capable of priming platelets to an activated state.

Treatment with ligands for LXR and FXR converted platelets to the procoagulant state, with increases in phosphatidylserine exposure, platelet swelling/ballooning, reduced membrane integrity, depolarization of the mitochondrial membrane and microparticle release observed. Increased mean platelet volume is a known marker of platelet hyper-reactivity, and widely associated with increased risk of thrombosis. Our findings are consistent with studies that have found that cholesterol derivatives, LXR receptor ligands, deregulate platelet responses to several platelet agonists and that treatment with bile acids (FXR ligands) can cause platelet dysfunction including membrane vesiculation and platelet swelling. (Fig. 1)

Our work has significant clinical implications as circulating and localised concentrations of several agonists for LXR and FXR, including cholesterol derivatives and bile acids, are increased under several pathophysiological conditions and could contribute to platelet deregulation. As ligands for LXR and FXR are under clinical development for the treatment of diabetes, high cholesterol and obesity, it is important to balance their beneficial metabolic effects against their possible side-effects on platelet reactivity and function.