Artificial Intelligence (AI) relies on synthetic neural networks, inspired by functional properties of living intelligent systems (brains) and learns autonomously on the basis of unsupervised learning procedures. Such learning permits, among other things, the analysis of changes in information with time to enable decision making. In order to be explainable as well as effective, AI approaches are to aim for the most parsimonious functional network architectures possible, and for the least computational cost in terms of time and resources. Our work applies this principle of parsimony to the case of the unsupervised automatic detection of minimal changes, invisible to the human eye, in complex image contents. The approach exploits a functionally parsimonious Self-Organizing Map (SOM) architecture (1 left), inspired by the functional properties of sensory neurons in the brain and, as input dimension, the RGB triplets of single image pixels. These are topologically mapped by a network of fully connected neurons in the SOM with a constant neighborhood radius.  Unsupervised winner-take-all learning is used for learning any pixel contents of an image of any image time series in a few seconds. 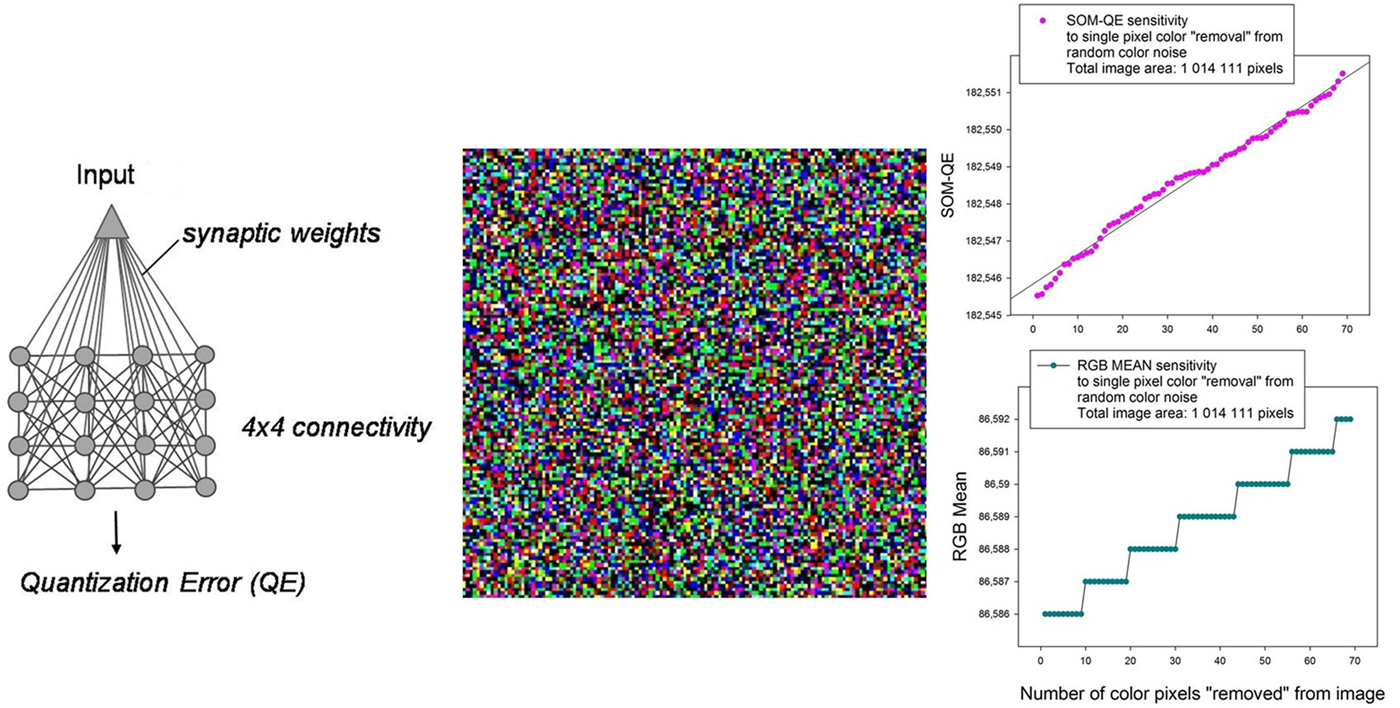 During learning, the input data xi are compared to likely matching units (neurons) mi in the map in order to identify the winning match. The Quantization Error of the SOM or SOM-QE reflects the difference between the input data space and its best-matching model representation (the “winner taking all”) in the SOM which is given by

where  is an integer, the discrete-time coordinate hci(t) the neighborhood function, which converges towards zero with time, and  the learning rate, which also converges towards zero with time. The SOM-QE tells whether a single one of up to several million pixels has changed in color or contrast in any of the images of any given series (1 middle)), which may consist of 10, 20, 100, or more images. As output metric of an unsupervised neural network learning process (AI), the SOM-QE outperforms the RGB Mean with regard to precision of single pixel change detection in millions of pixel contents (1 right), and with regard to computation time. 5. Conclusions Digital image pixel RGB based models of viral proliferation after focal infection in vitro, or cell recovery in response to a specific treatment, may contain millions of image pixels that cannot be processed visually even by an experienced expert. The unsupervised self-organizing map based SOM-QE approach is shown to provide a fast and statistically highly reliable detection and classification model for the finest single pixel changes in image series containing millions of pixels. The approach has been successfully applied to medial image time series for the ultrafast detection of lesion growth, the detection of structural changes reflected in satellite images and viral proliferation or cell viability detection in imaging data. This classification method uses biologically inspired AI learning mimicking the sensitivity to pixel contrast intensity, contrast polarity and color of visual neurons. It outperforms human computer-assisted image classification, is computationally economic, and can be applied to a large variation of imaging data prior to further modeling.