More than a dozen epidemics of thunderstorm-related acute severe asthma have been reported in past 3 decades. The largest event occurred in Melbourne Australia (October 2016) affected more than 8,000 individuals and resulted in ten deaths. This coincided with extreme rye grass pollen levels. The accepted pathogenesis is as follows (Fig. 1). Thunderstorms with outflows, a cold blast of air/wind preceding the thunderstorm, and updrafts picks up grass pollen and lift it into the clouds where the moisture causes the pollen grains (which are too large to be inhaled) to rupture into smaller allergen-rich granules small enough to be inhaled deeply into the lungs. As the storm moves across the allergen rich landscape the ruptured pollen load will increase. The resulting large allergen challenge then affects highly allergic young individuals who are outdoors during the storm and causes sudden episodes of asthma. Most affected asthmatics are highly allergic to rye grass, have mild or very mild asthma, often only admitting to allergic rhinitis (hay fever), and are consequently not receiving any asthma therapy at the time of the exposure. 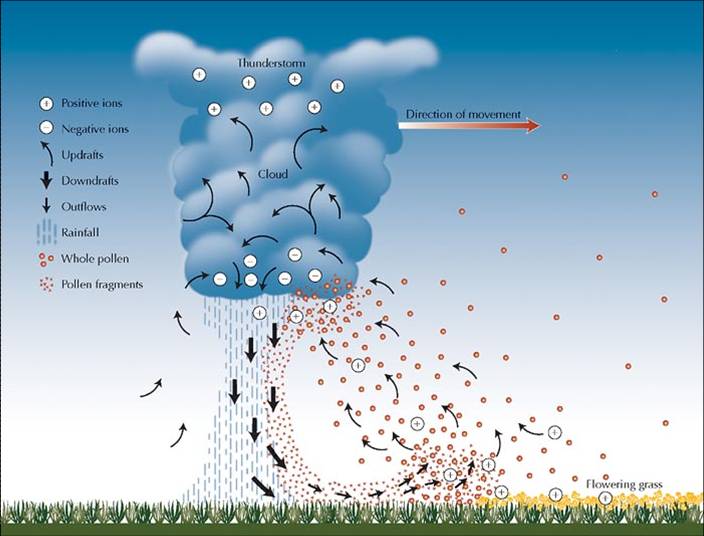 Fig. 1. Pathogenesis of thunderstorm asthma. Updrafts lift whole grass pollen into the moisture-rich clouds, resulting in osmotic fragmentation of pollen. The downdrafts and outflows are allergen rich and the allergen load can increase as the storm passes over grass fields.

Allergen challenge in the laboratory produces both early and late asthmatic responses. The early asthmatic response or EAR is primarily due to airway smooth muscle contraction, so-called bronchospasm, occurs within minutes of exposure, and, if not too severe, resolve promptly either spontaneously or after administration of a simple bronchodilator puffer. The late asthmatic response, by contrast, occurs several hours later, is more gradual in onset, and involves airway inflammation and general worsening of asthma severity in addition to bronchospasm. Most asthma presentations to emergency facilities are the result of gradually worsening asthma control over several days or longer. In the allergic asthmatic, this would represent chronic late asthmatic responses due to ongoing continuous or intermittent allergen exposure. Naturally occurring early asthmatic responses, i.e. sudden severe asthma within minutes after allergen exposure are uncommon reasons for emergency care requirement. Indeed the concept of the asthma “attack” (attack equating with sudden) is generally an inappropriate term when referring to most asthma exacerbations.

In contrast to most asthma exacerbations, however, we hypothesise that thunderstorm asthma represents EARs. The rationale behind this hypothesis includes the following. The EAR, in susceptible individuals, depends on both the dose of the allergen exposure and degree of allergen sensitivity. Data suggest that both exposure and sensitivity appear to be in the extreme range in asthmatics afflicted with thunderstorm asthma. The onset of the asthma, unlike usual emergency patients, is genuinely sudden occurring within minutes of exposure in asthmatics, many of whom did not appreciate they had asthma, with no prior symptoms and (unfortunately) no access to asthma medications. It appears that these asthma episodes on average resolve faster than usual emergency asthma events, and consequently the rate of hospitalisation is lower than average. All of these points strongly suggests that these individuals are suffering from allergen-induced early asthmatic responses. Since these respond well to (early) treatment, it appears that the fatalities relate to delayed access to medical care, likely created in large part by the extreme pressure on ambulance services because of the large and sudden demand.

Prevention or harm reduction would include the following. Early warning of the type of thunderstorms that cause this could help. Exposure can be reduced by remaining indoors with the window closed during the storm. Allergen immunotherapy, either allergy shots or bub-lingual therapy, appears to reduce the risk. Perhaps most importantly, identification and treatment of those mild and very mild asthmatics at risk of this life threatening condition should be a priority.