Fear and knowledge of food: the new noumenic approach to consumer perception

The theme of genetically modified organisms (GMOs) is very important for modern consumers, especially when they access novel foods. Future genetic modified organisms are probably to contain plants with improved fighting across plant disease or dryness, crops with increased nutrient levels, improved species with better growth characteristics. In the new approach the researchers have attempted to assess the effect of genetically modified foods on the consumers’ preferences, considering a new perception of ours (beyond the previously vision), that is the Noumenic approach. Practically, GM foods cannot be perceived in a tangible way (because they are substantially equivalent to conventional products); they can be understood only through reasoning and, therefore, knowledge. Knowledge could be the variable that dampens the effect of fear and consequent behaviour. 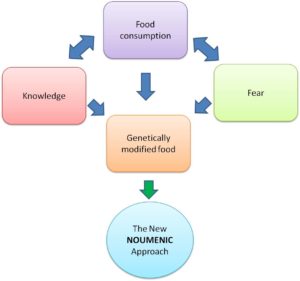 So, this case is able to be considered from a fear point of view, where knowledge can play a fundamental role in food purchasing decisions. It can be analyzed through the new Noumenic approach for consumer behavior: as a matter of fact it was trying to assess genetically modified food impact on consumer’s preferences, considering the noumenic approach through knowledge-fear-bahaviour model. GM foods is an important affair for European modern consumers and, on this concept, an investigation on a sample size survey was conducted in Italy. The noumenic approach mainly contains two aims which are listed as the following ones: firstly, a significant model in order to distribute origins of behaviors regarding consumers’ genetic modified food preferences; secondly, only by reasoning it is possible to ensure that specific variables do not condition purchasing behavior.

Based on data analysis, the most important element in this study is knowledge, which is the degree of consumer awareness when making purchases. Therefore, although GM foods may have essential implications, they seem to have a negative effect on consumer perception, specifically because of the lack of consumer knowledge about GM food consumption. The reasons may include a low degree of correct diffusion of information about GM foods, absence of education on the matter, emotional considerations and fears. Because most people lack knowledge about GMOs, the common attitude is likely to be aversion. This behaviour poses the larger issue of general aversion to biotechnology and novel foods due to unfamiliarity. Linked to gap of knowledge, psychological bias comes into play, derived from the perceived distance of GM from ‘natural’ foods (familiar), and, because in general the more things are unfamiliar, the more they are perceived as risky, avoidance and fear are the consequences. As a matter of fact, it is possible to see that, often, consumers buy considering price, brand and perceived quality rather than GM products. Therefore, a strong information strategy could be important to the change trend.

Information should act as a preparatory stage to help people stop fearing GMOs by lessening their sensitivity to the unfamiliarity or strangeness of GMOs. Considering GMOs using a noumenic approach, we conclude that enabling people to acquire an adequate amount of information could empower them to consciously choose among different food options without fear. Moreover, it is possible to highlight that the use of the chosen quantitative method has produced significant results: as well as a different representation model for evaluation of knowledge and fear in consumer behaviour based on a noumenic approach (because GM foods cannot be perceived in a tangible way). This method also made it possible to cluster behavioural variables to determine the fear of consumers toward GM food consumption without correct information and, formerly, binding reflections on the focal features of individuals in the sample. Obviously, the approach can be considered also a starting point for future researches.