Multipotent mesenchymal stromal cells (MSCs) are very attractive for cell therapy. For the healing of severe defects in connective tissue (bone, cartilage, fat) their ability to differentiate into various elements of connective tissue origin is used. Their potential to immunomodulation (Fig. 1) is used to treat autoimmune diseases, prevent and treat acute graft versus host disease. It was believed that MSCs from third part donor are not attacked by cells of the immune system, since they do not express the molecules of the main histocompatibility complex – HLA-DR. To increase the immunomodulatory properties of MSCs, attempts were made to activate them using various chemokines and cytokines. In the treatment of MSC with interferon gamma (IFN), the expression of some genes responsible for inhibition of T cells is significantly increased. 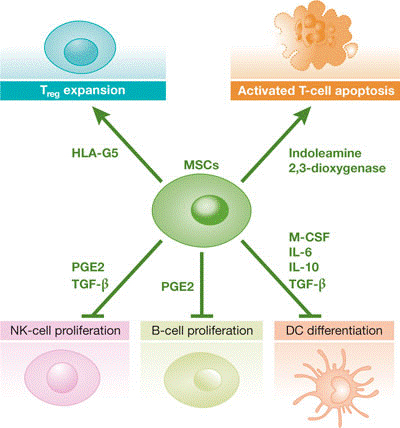 Under its influence, the level of expression regulating the immune response of genes – IDO1, CSF1, IL6, etc., is increased, which is good for their clinical application. The total cellular production of MSCs significantly decreases with prolonged cultivation in the presence of IFN, that is, it becomes much more difficult to obtain the desired dose of these cells, whereas a 4-hour exposure does not affect the cell production. It has been shown that if incubating MSCs with IFN for a short time, and then washing this cytokine, then the expression of immunomodulating genes increases dramatically. After 4 hours of cultivation, the level of IDO1 expression increases 362 times. Further in a day expression of IDO1 increases in 1.3 times. The level of CSF1 expression is increased by 7 and IL6 by 2.4 times after 4 hours of incubation with IFN; however, after removal of IFN from the medium every other day, in contrast to IDO1, CSF1 expression decreases 5.4 times and IL6 1.6 times compared with their expression after 4 hours. It was found that if MSCs were cultured in the presence of IFN for more than a day, HLA-DR molecules begin to be actively expressed on MSCs and they lose their immunoprivileged status, but HLA-DR expression does not increase during the first day. That is, allogeneic cells can be used for one day to effectively inhibit the immune response. When studying the activation of the immunomodulating factors expression in the case of co-cultivation of MSCs with allogeneic or autologous lymphocytes, it was found that the interaction of MSCs with lymphocytes leads to a much greater increase in HLA-DR expression on their surface than after IFN treatment. From these observations follows a rather sad conclusion that for the long-term action of MSCs in the body, only autologous cells can be used. This does not mean that MSCs from a third-part donor cannot be used. In some cases, several hours of their effective functioning are sufficient to improve the patient’s condition, for example, in Crohn’s disease, some other autoimmune diseases, and the treatment of a graft-versus-host disease. With intravenous injection, MSCs interact with lymphocytes. Since MSCs lose their immune privilege, MSCs from third-part donor is destroyed by lymphocytes as foreign and only own cells can survive this interaction. Thus, it is necessary to clearly represent the goals of using MSCs in clinics and to decide whether to activate by IFN autologous MSCs or MSCs from a third-part donor.

Materials supported by a grant from the Russian Science Foundation (project No. 16-15-00102) were used in the work.