The discovery of antibiotics in the early 20th century had an enormous impact on modern medicine, dramatically reducing mortality associated with infections.  However, the emergence of drug – resistant pathogens has occurred due to greater availability and inappropriate use of antibiotics in healthcare and agriculture and has become a global health concern.  In particular, multi-drug resistant organisms such as vancomycin-resistant Enterococci (VRE), methicillin resistant Staphylococcus aureus (MRSA) and extended spectrum beta-lactamase (ESBL) and Clostridium difficile (C. difficile).  All of the bacteria that live inside the human gastrointestinal tract are referred to as the microbiota.  The microbiota of the human gut is a complex ecosystem with the potential to be an enormous reservoir of antibiotic resistance (ABR) genes, known as the ‘gut resistome.’ Antibiotic resistance may arise in a number of different ways, including the accumulation of point mutations and horizontal gene transfer from other bacterial populations to potentially pathogenic bacteria.  The increase in the prevalence and incidence of antibiotic resistant bacteria now presents a severe challenge in the treatment of patients infected with these multidrug-resistant organisms. 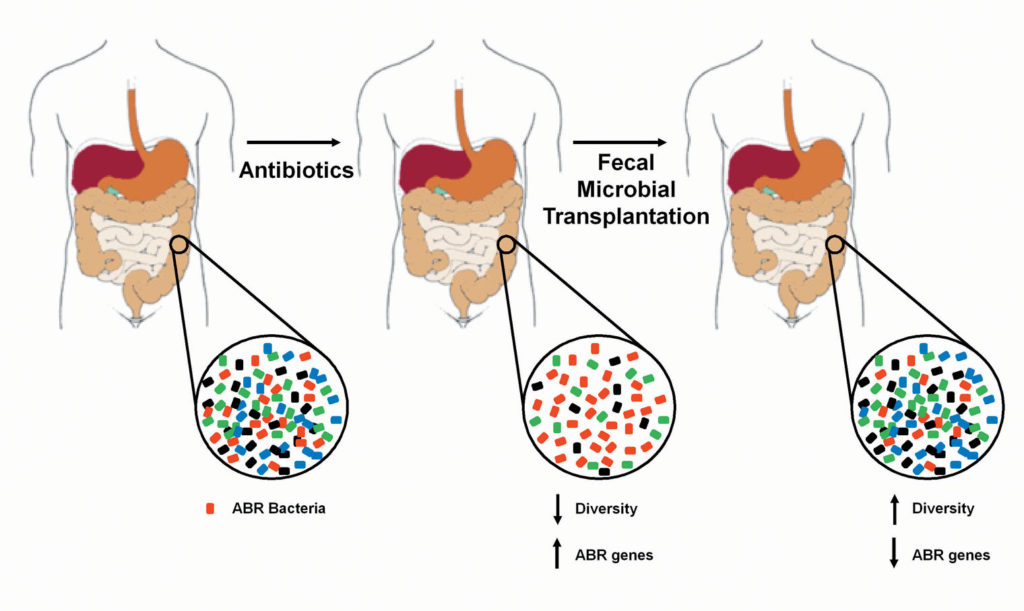 Fig. 1. The human gut microbiome naturally contains some bacteria that carry antibiotic resistance (ABR) genes. Following repeated courses of antibiotics, the diversity of the gut microbiota is reduced, allowing the bacteria containing ABR genes to flourish. This allows for opportunistic pathogens such as Clostridium difficile to colonize and dominate the gut. Following fecal microbial transplantation, the diversity of the gut microbiota is increased and bacteria containing antibiotic resistant genes are eradicated.

A major complication associated with antibiotic use is C. difficile infection (CDI). C. difficile is an anaerobic, spore-forming, toxin-producing bacteria that is present in 3% of the healthy adult population; however, up to 20-50% of adults in hospitals and long-term care facilities become colonized.  C. difficile infection is treated with the antibiotics metronidazole or vancomycin, but the risk of the recurrence is 20-30% within 30 days of initial treatment and increases further up to 50% after a second episode.  Fecal microbiota transplantation (FMT) is the infusion of lightly processed stool from healthy donors into the gastrointestinal tract of a recipient.  FMT has emerged as an efficient and safe therapy for recurrent C. difficile infection (RCDI), with over a 90% success rate.

In our single-center study, patients with RCDI (n=20) received FMT from universal donors via colonoscopy.  Stool samples were collected from donors (n=3) and patients prior to and following FMT.  Bacterial DNA was extracted from patient and donor stool samples and sequenced using shotgun metagenomics. Using the sequencing data, taxonomic classification of the microbiota was performed using a database from the National Center for Biotechnology Information (NCBI).  Another healthy cohort (n=87) from the Human Microbiome Project (HMP) were included with our patient and donor samples in the resistome analysis using the Comprehensive Antibiotic Resistance Database (CARD).  The purpose of this was to ensure that our three healthy donors’ resistome was representative of a healthy population.  Metagenomic results were corroborated through a DNA microarray containing 354 different ABR genes.