Bacteria live in oil reservoirs and eat the oil. Some of them are known to produce surface active molecules (biosurfactants), which act as detergents. Biosurfactants may help produce more oil through breaking globs of oil trapped in rock pores into small droplets, which can be driven out of an oil reservoir with either water flood or gas flood. Not all microbes that live in a reservoir can produce biosurfactants, and the challenge is to find those that can produce them and to stimulate their growth. We analyzed DNA extracted from oil field samples provided by our industrial partner and found that some DNA sequences belonged to Pseudomonas and Bacillus species, which were previously shown to produce biosurfactants. 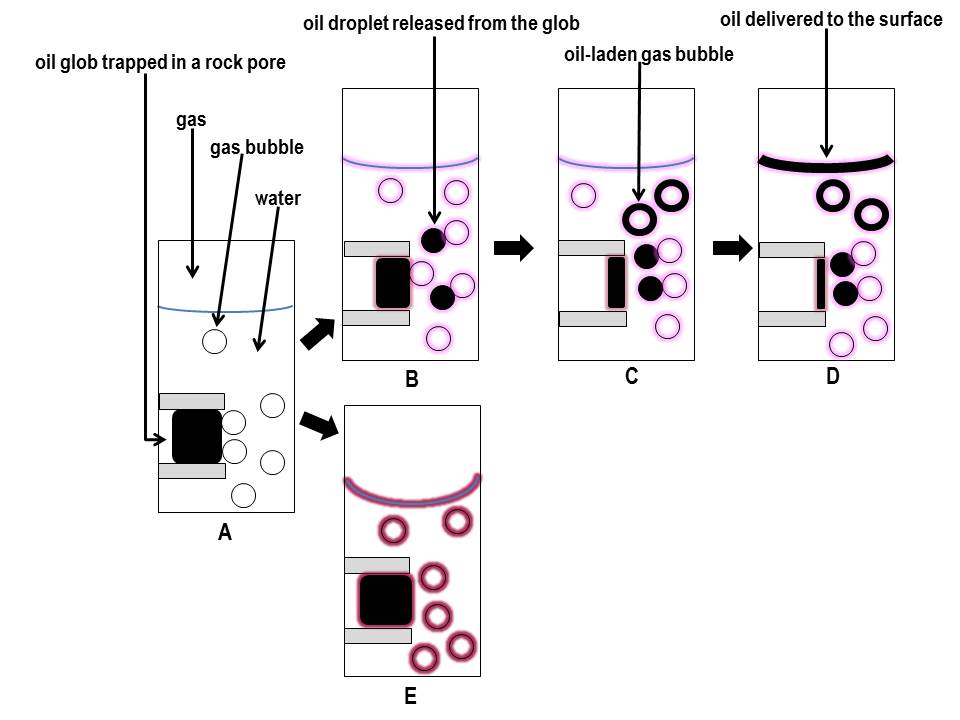 We tried to selectively grow these bacteria in special broths containing proteins or sugars. The broths were mixed with the oil field samples, which served as sources of microorganisms, and incubated in heated 0.5-L pressurized anoxic steel chambers imitating the conditions in the oil reservoir (temperature 30⁰C and pressure 8.3 MPa). In previously reported experiments, respiration (breathing) of some biosurfactant-producers was stimulated with injection of oxygen or nitrate. However, microbial respiration with either oxygen or nitrate can lead to increased corrosion of metallic pipes. We tested whether fermentation (“breathless” microbial activity, which occurs in the absence of oxygen or its substitutes, such as nitrate) could lead to biosurfactant production. Growth of microorganisms in the chambers for 30 days led to 3 – 5-fold reduction of broth surface tensions indicating production of biosurfactants. However, the observed surface tension reduction was not sufficient for the enhancement of water-flood-driven oil recovery: it was shown in previous studies that at least 100-fold surface tension reduction may help enhance water-flood-driven oil recovery. At the same time, 3 – 5-fold surface tension reduction may be perfect for the enhancement of gas-driven oil recovery. During gas-driven oil recovery, oil-laden gas bubbles can form easily when biosurfactants are present in low concentrations (Fig. 1, A-D), whereas formation of such oil-laden bubbles may be thwarted when biosurfactants are present in high concentrations because in this case repulsion between biosurfactant-coated oil droplet and gas bubble surfaces may occur (Fig. 1E). DNA-analysis confirmed that microbes enriched in the chambers were, indeed, Pseudomonas fluorescens and Bacillus mojavensis known to be biosurfactant-producers. Thus, our results indicate that some biosurfactant producers may have selective advantage when only fermentative lifestyle is possible. Provided that potential biosurfactant-producers, such as P. fluorescens and/or B. mojavensis, are found in an oil reservoir, an injection of molasses or other types of agricultural wastes containing sugars or proteins, followed by a pause in oil production (to allow growth of target microbes and production of biosurfactants), may help enhance oil recovery, particularly when gas-driven oil recovery takes place.