Neck masses can be incidental or the reason for significant concern for parents and physicians. The technique of fine-needle aspiration (FNA) cytology (FNAC) may be crucial in such settings. In 1981, the first FNA biopsy performed in the United States was done at Maimonides Medical Center, a non-profit hospital located in Borough Park, Brooklyn, New York. The technique involves the introduction of a thin, hollow needle into the mass for a sampling of cells. These cells are, then, stained and examined using light microscopy. FNAC is a very safe minor surgical procedure, which eliminates the necessity to admit patients. FNAC is mostly performed on a lump when its nature is in question upon clinical examination and radiologic evaluation. Other indications include the assessment of the effect of treatment or to gather tissue samples for individual studies (e.g., molecular biology studies). 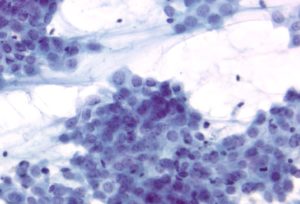 This procedure needs some precautions, including the stop of using aspirin or non-steroidal anti-inflammatory drugs for one week before FNAC, no intake of liquid or food until a few hours before FNAC, previous exclusion of clotting disorders, and suspension of blood anticoagulants. Often, antibiotic prophylaxis is preferred. In the figure shown below mucin-secreting vacuolated cells, intermediate cells, and squamous cells in a background of mucin. Squamoid cells have dense cytoplasm, and glandular cells have vacuolated cytoplasm, while the intermediate type has features of both types.

Salivary gland lesions remain rare entities in children, although an increase of tumors of the salivary glands in adolescence and youth has been reported recently. Since malignant tumors of the salivary glands are relatively more often recognized in younger patients a safe approach, e.g., using FNAC, is advisable and crucial. Cytologic diagnoses of tumors harboring some degree of malignancy are confirmed histologically in 93% of cases, i.e., following surgical resection. Such percentage reaches 95% in the case of benign tumors. In a nutshell, the potential avoidance of surgical complications (e.g., scars), early and late complications of septic and non-septic nature, risk of general anesthesia, prolonged recovery time, and weighty expense bills have all been indicated as benefits of FNAC, especially given the high prevalence of non-neoplastic pediatric tumor and masses of the neck region.

Acknowledgments
We are very grateful to the Women and Children’s Health Research Institute for funding pediatric pathology program at the University of Alberta.