Fine tuning of inflammation is a key to successful limb regeneration

Complete regeneration of appendages after amputation in certain fish and amphibians has long served as a useful model for analyzing why regeneration is unsuccessful in most mammalian organs. Recent work with zebrafish, frog tadpoles, salamanders, reviewed in the article cited here, highlights the importance of controlling the inflammatory response to fin or limb amputation if the repair process in  the injured tissues is to progress through restoration of the missing limb. Despite its long association with scarring during repair of human wounds, inflammation at the onset of regeneration in fish and amphibians is only now becoming more widely studied by the developmental biologists who define this field. 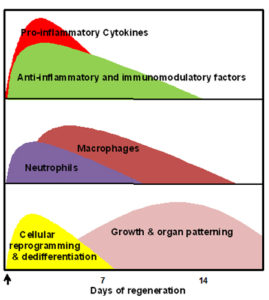 Fig. 1. Expression profiles after amputation (arrow) of cytokines and other inflammation-related factors, the major immune cells, and the major regeneration-specific events during the course of limb regeneration in larval amphibians.

During limb regeneration in amphibians an inflammatory response begins immediately after amputation and becomes most intense in the days following epidermal closure of the wound. As in mammalian wounds,  inflammation here (Fig. 1.) involves accumulation of immune cells called neutrophils and macrophages which kill local bacteria, remove debris and dead cells, digest the extracellular matrix of limb tissues, and release hormone-like factors called cytokines, which modulate the duration and extent of these activities. Peak inflammatory activity coincides with the period in which cells of skeletal elements, connective tissue, and muscle injured by amputation undergo changes in both gene expression and tissue-specific morphology. Proliferation of these cells normally gives rise to an undifferentiated mass called the regeneration blastema in which localized secretion of specific proteins mediate cellular interactions that will delineate the axes and later the specific pattern of new limb components.

Blastema patterning, the crucial process determining the success of limb regeneration, is now revealed to be functionally dependent on adequate local inflammation triggered by injury as well as its timely diminution in the more gradual process of inflammatory resolution. We have shown that regenerative limb patterning in frog tadpoles fails either if the initial inflammatory response is abrogated by treatment with steroids suppressing immune cell activities or if acute inflammation is sustained after local application of a strong, persistent immune stimulant. The release of polypeptide growth factors and other events occurring during inflammation lead to the cellular plasticity and proliferative activity which produce the regeneration blastema. How chronic or excessive inflammation inhibits expression of genes required for blastema patterning is not clear. One hypothesis is that an excess of the many cytokines and other signaling factors released locally during unresolved inflammation interferes with the specificity or timing of signaling interactions required to pattern the new limb, like excessive electrostatic discharges during a thunderstorm interfere with specific electromagnetic frequencies being used for radio transmissions. Alternatively, the sustained presence one or more signaling factor, or a persistent change in the microenvironment, produced by chronic inflammation may inhibit an initial step(s) needed for limb patterning.

Recent work also reveals macrophages as the most important cells regulating events during local inflammation and resolution. Drug-induced deletion of these immune cells temporarily and specifically from salamanders normally capable of limb regeneration completely abolishes this ability. Regenerative failure in the absence of macrophages includes increased production of proinflammatory cytokines and lower levels of anti-inflammatory cytokines, very low rates of blastema cell proliferation, and ultimately scar formation at the limb stump. Reamputation of the limbs after the appearance of new macrophages in these animals is followed by normal regeneration.

These studies, together with other work also reviewed here which suggests the importance of more specialized cells such as regulatory T lymphocytes in regeneration, have revealed previously unsuspected but crucial aspects of amphibian limb regeneration and indicate new ways of approaching the poor regenerative capacity of most mammalian organs.