The internet of things opened new possibilities relative to the integration of wearable electronics in textile-based devices, allowing the development of new technologies in energy storage and energy harvesting area, sensors, actuators and the following step of integration with the internet for the transmission of data. In particular, flexible photonic devices are required for the production of integrated light-emitting devices, flexible displays, and multifunctional wearables for application in areas such as phototherapy.  Random lasers (RLs) are optical sources that explore different mechanisms than conventional lasers. While the feedback in conventional lasers is provided by static mirrors, random lasers explore the feedback from light scattering in disordered nano or micron-sized structures, characterizing a new class of partially coherent light sources. The scattering of light in the liquid phase from organic dyes represents a primary source for RLs with a bottleneck relative to the risks of leakage of the liquid phase and contamination in wearables-based applications. To circumvent this drawback, the development of all-solid-state devices with truly flexible behavior is strongly required. 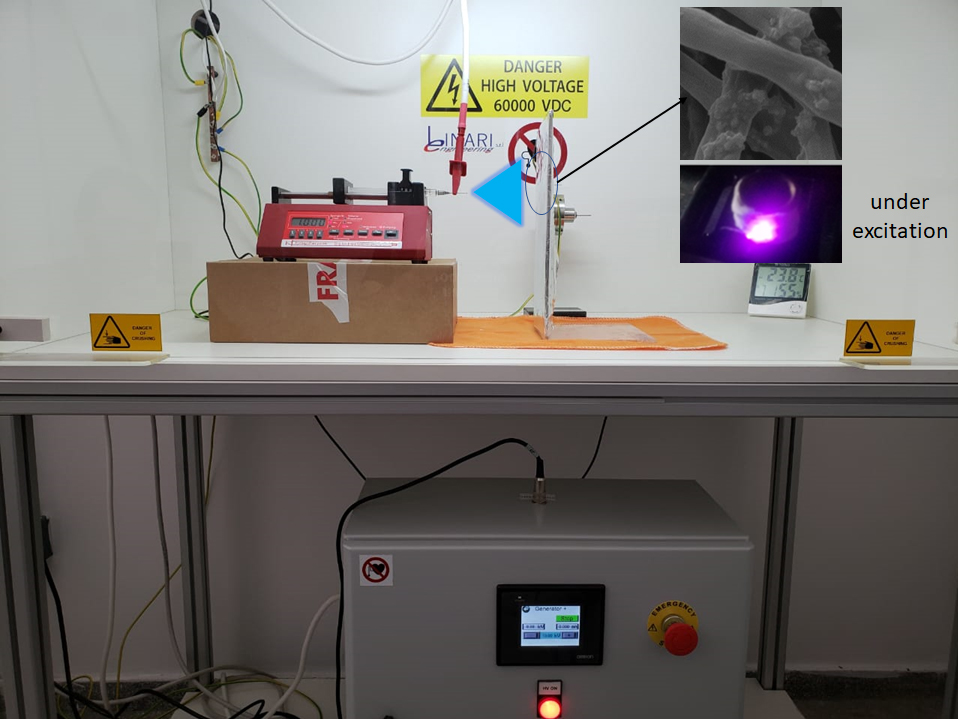 With this aim, the production of electrospun fibers introduces advantages due to the low cost and massive production of flexible polymeric nets that can incorporate additives with relevant optical responses such as light scattering and gain media prototypes. The typical experimental setup for electrospinning technique is based on the preparation of a viscous polymeric solution that is maintained under fixed pressure in a syringe (in a flux of few milliliters per hour) and under a high voltage (in order of 20 kV) established between the tip of the spinneret and a grounded target. With the incorporation of additives (such as zinc oxide nanoparticles) into the polymeric solution, the resulting fiber net is composed of homogeneous distribution of gain medium prototypes (ZnO nanoparticles) with advantages of a flexible matrix that can be excited by a single or multiphoton configuration enabling applications in laser therapy, optical storage and so on. The experimental setup for fibers preparation is shown in Figure 1.

This paper reports the use of the electrospinning technique for the production of zinc oxide-reinforced cellulose acetate fibers, which is explored as support for decoration with silver nanoprisms that combines the overall structure with the plasmonic response of silver nanostructures and provides a strong emission at 387 nm. The presence of plasmonic structures (silver nanoprisms) reduces the threshold energy for RL emission (in order of 80%) improving the application of this material in photonics. In addition to the strong emission in the ultraviolet region of the electrospun fibers, it is worth mentioning important retention in the emissive response under a severe degree of bending, since negligible spectral characteristics of the device are affected under mechanical folding. In addition, unlike the dye-based random lasers, negligible degradation is observed under successive use of material (no degradation of material – in terms of emission is observed after 10,000 shots of the pump laser).