Glass is hard and brittle at room temperature, but can be very soft when it is heated to above its glass transition temperature. That is the reason that glass craftsmen can create various shapes of beautiful glassware. In the past, the exquisite shapes of glassware were solely skill-dependent. In the modern industry, however, most glass products are fabricated by large machinery such as casting and molding machines. Therefore, to make a high quality glass product one has to fully understand and precisely control the deformation of glass at high temperature.

Borosilicate glass is a type of glass in which silica and boron oxide are the main constituents. Due to the anomalous influence of borate in the glass network, it possesses very low coefficients of thermal expansion, making them more resistant to thermal shock than other common glass. It also possesses a low glass transition temperature (~ 500 ˚C) and thus is very suitable for precision optical lenses. Some molecular simulations found that the borosilicate network is constituted from 4-fold coordinated Si and 3- and 4-fold coordinated boron. With increasing the temperature, rigid 4-fold coordinated boron transforms to softer 3-fold coordinated boron. This transformation also contributes to the viscous flow of borosilicate glass at high temperature. It is thus expected that this type of materials can have more complicated rheological features. However, no solid experimental evidence is available. 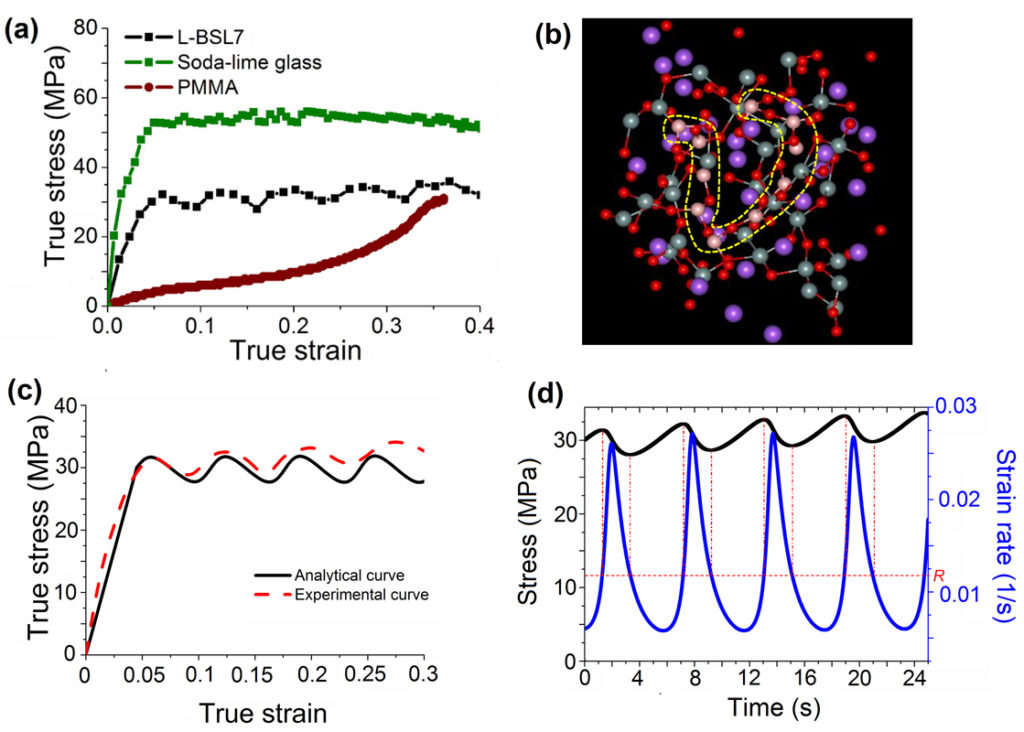 Fig. 1. (a) Stress-strain curves of L-BSL 7, soda-lime glass and PMMA. (b) Microstructure of borosilicate glass. (c) Stress oscillation predicted by the developed model. (d) The comparison of the evolutions of stress and strain rate. Adapted from Scientific Report 2017;7:15872.

In the investigation by Weidong Liu and Liangchi Zhang et al. published in November 2017 Scientific Report, a series of uniaxial compressive tests were carried out on borosilicate glass (L-BSL7) at high temperature. It was found that the deformation of the borosilicate glass has an interesting periodic fluctuating mode, as shown in Figure 1a. For comparison, the deformation curves of other two materials, i.e. PMMA and silicate glass, are also presented. The fluctuating deformation was verified at different loading rates, temperatures, and loading and annealing histories.

The authors further explored the underlying mechanism of this interesting deformation behavior. The Ab initio analysis revealed that the microstructure of borosilicate glass consists of borate-rich (surrounded by dotted yellow line in Figure 1b) and silicate-rich networks, with randomly distributed alkali cations. Considering that the rigidity of boron domain is smaller than silicon domain, the viscous flow of borosilicate glass is mainly in the borate domain. As the silicate network and borate network are linked together, the deformation in the borate domain could be relaxed slowly by the surrounding silicate network. The competition of deformation in borate-rich network and relaxation in the silicate-rich network leads to the observed fluctuation deformation.

Actually, similar fluctuating deformation has been observed in other materials. For example, serrated plastic flow has been observed in many solution-hardening-alloys such as Ni-C alloy, known as Portevin–Le Chatelier effect. Quasi-periodic avalanche bursts have been observed in slowly compressed nickel microcrystals. All of them were classified into relaxation oscillation. Following the theory of relaxation oscillation, the authors established a constitutive model to describe the observed fluctuation mode. A good agreement between the analytical curve and the experimental result was obtained, as shown in Figure 1c. The observed stress oscillation is attributed to the periodic changes of strain rate (Fig. 1d) resulted from the competition of borate and silicate domains.