Nuclear Magnetic Resonance (NMR) is a very powerful analysis method employed in biology and chemistry. It helps us to gain information about the molecular structure of a wide range of molecules. For example food production companies employ NMR in their quality control process or pharmaceutical companies use NMR for drug development. The method is also employed in material science for structure analysis. 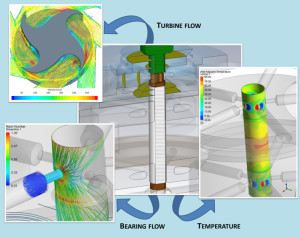 However, NMR is a very insensitive method, since it affects only every ten thousandth molecule of the analyzed probe. Therefore, the signal intensity and furthermore the signal to noise ratio are highly important. Developers, researchers, and fabrication companies have spent tremendous efforts to increase the signal to noise ration of NMR systems. Moreover, the quality of the signals is related to the signal shape. NMR analysts like sharp, clear and undisturbed signals, in order to tell the signals easily apart.

NMR signals obtained from liquid samples produce much sharper signal lines than that form solid samples. It is well known that rotating a solid NMR sample under a so-called Magic Angle to the magnetic field direction sharpens the signals significantly; it means that the resolution of the signals is enhanced. The method is the so-called Magic Angle Spinning (MAS) Nuclear Magnetic Resonance. Herein a tiny cylindrical sample of 1mm to 7mm diameter and about 10mm length is rotated with thousands to ten thousands revolution per second. The rotating sample is driven by a micro turbine sitting on the top side of the sample. This micro turbine is driven by pressurized air or nitrogen. For such high speed systems gas bearings are the preferred choice, due to its small bearing friction.

In our present work we studied the flow phenomena of the turbine and bearing system. An in-depth analysis of this flow system shows that speed of sound is reached on the blades of the micro turbine. We performed flow measurements and Computational Fluid Simulations (CFD) of the rotor bearing system shown in the figure below. This analysis helps us to understand the flow behavior and finally to optimize the turbine system. We pushed the rotation speed of a 1.3mm diameter turbine up to 67 revolutions per second (67 kHz). Moreover the efficiency of the system is computed and compared with standard turbines like jet engines, gas turbines or water turbines. It can be seen that the efficiency is rather low (about 25%), though our MAS system is mainly optimized for stability and rotation speed and not for efficiency. Over all this flow analysis brings the understanding of this flow system significantly forward and is an important step to reach a rotation speed of over 100 kHz resulting in much further enhancement of the spectrum quality.