Cancer is considered as one of the leading cause of death worldwide. Due to the ever changing lifestyle of the modern society, the incidence of cancer is on the rise. Lung cancer is the most frequently diagnosed cancer, prevalent in both men and women. Despite several advancements in the field of cancer diagnosis and treatment, it is still not possible to curb the menace of cancer.

Dynamic nature of cancer offers an opportunity to employ different strategies to achieve the best possible outcomes. In this regard, design and synthesis of polymeric nanocarriers with imaging and therapeutic modalities has been of prime significance for cancer nanotheranostics, circumventing the drawbacks associated with conventional cancer diagnosis and treatment. Hydrogels are composed of three-dimensional, cross-linked networks of polymers that absorb water. Due to inherent compatibility to living tissues, hydrogels can potentially serve as multifunctional vehicles for simultaneous loading of imaging agents and drugs for cancer therapy. Our article therefore describes the facile development of chitosan-based hydrogel (HY) formulation composed of highly fluorescent carbon dots (CDs) and loaded with a model anticancer drug, 5-Fluorouracil (5-FU) to form a hybrid assembly (5-FU@CD-HY). Several investigations from our lab as well as others suggest CDs as biocompatible imaging agents with several competitive advantages such as high photostability, ease of surface functionalization, multicolour fluorescence emission. Moreover, 5-FU has been proven effective against a variety of cancers including skin, colorectal, liver, breast, pancreatic and lung cancers with a known mechanism of action. In this way, it was possible to combine the merits of both CDs and 5-FU on a common platform through hydrogels. 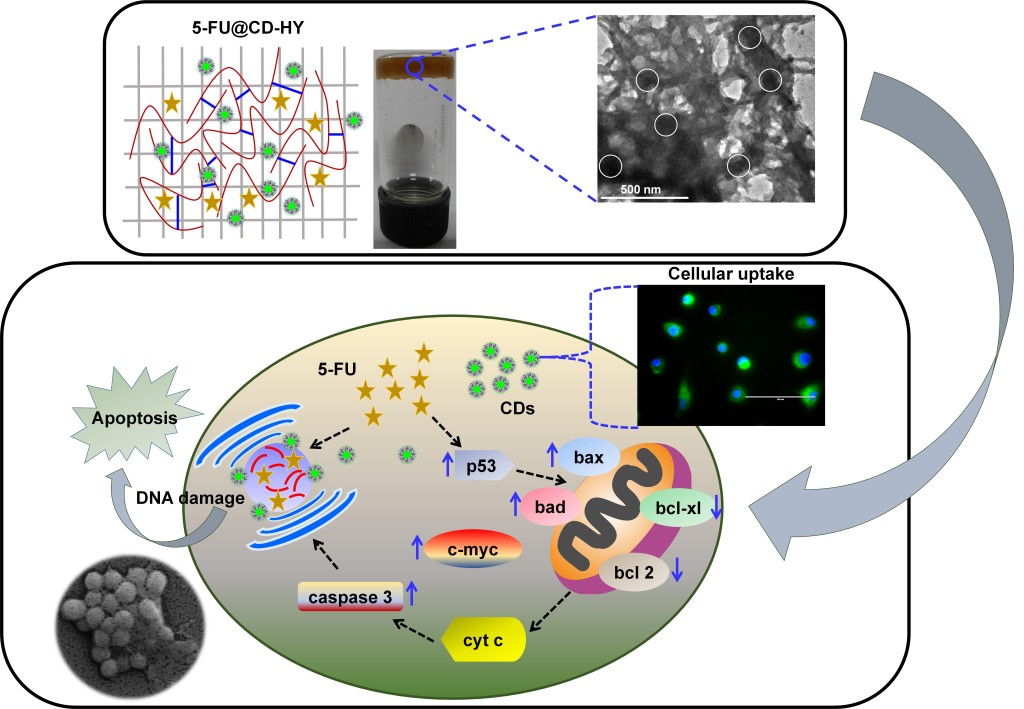 The non-covalent pathway adopted for fostering the hybrid assembly had several benefits such as ionic interactions mediated integration of CDs without any loss in fluorescence and physical entrapment involving hydrophobic interactions for loading of 5-FU inside hydrogel matrices. Multifunctional aspects of 5-FU@CD-HY in monitoring the cellular uptake (by CDs) and inflicting apoptosis (by 5-FU) through a cascade of events were successfully demonstrated in vitro using A549 (human lung adenocarcinoma) cells (Fig. 1). Green fluorescence of CDs in 5-FU@CD-HY aided the qualitative and quantitative assessment of cellular uptake. In addition to this, the fluorescence of CDs was used to detect apoptosis instigated by 5-FU, eliminating the need for multiplex dyes. Usually, living cells are characterized by vacant fluorescence in the nucleus. Reduction in cell size, shift in fluorescence location from cytoplasm to nucleus and dense fluorescence of whole cells is symptomatic of apoptosis. In case of non drug loaded hydrogels, the green fluorescence emanated from the cytoplasm of the cells under fluorescence microscopy. Differentially, 5-FU@CD-HY exhibited toxic effects which induced change in cell morphology. In these cells, cytoplasmic constriction led to lesser distribution of green fluorescence in the cytoplasm and dense fluorescence was seen inside the nucleus suggested nuclear internalization (apoptotic cells). Hence, by tracking the fluorescence of CDs in 5-FU@CD-HY with respect to nucleus, living and apoptotic cancer cells were distinguished.

The interactions between the encapsulated drug and the hydrogels allowed a sustained release of drug for 48 h. Interestingly, we observed that the hydrogels displayed a slow release of 5-FU at physiological conditions (pH 7.4) compared to acidic environment. This is advantageous since tumor cells have an acidic microenvironment, thereby enabling selectivity in action. Accordingly, the 5-FU loaded hydrogels were able to significantly inhibit the growth of A549 cells in a dose-dependent manner in contrast to non drug loaded counterparts. Therefore, our findings propose hydrogels as a novel versatile means for synchronized bioimaging and controlled drug release in cancer theranostic applications.

Carbon dots incorporated polymeric hydrogels as multifunctional platform for imaging and induction of apoptosis in lung cancer cells
Sachdev A, Matai I and Gopinath P.
Colloids Surf B Biointerfaces. 2016 May 1