Folding of biomolecule strands (such as proteins and nucleic acids) play important fundamental role in emerging their functions such as binding to the partner molecules (only folded structures can have function to bind the partner molecules) to lead subsequent variety of biological phenomena.  Controlling the biomolecule folding by pre-determined stimuli could thus find various bio-applications including therapeutic application and contribute to a comprehensive understanding of biomolecule behavior. 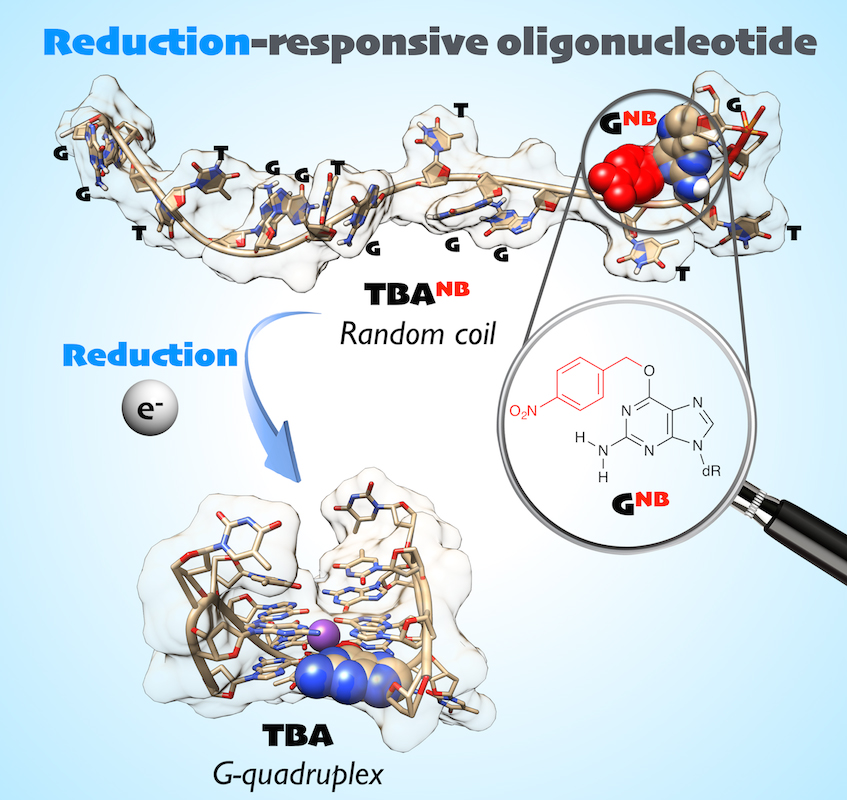 It is revealed that DNA strands comprising of guanine (G)-rich sequences tend to fold into unique folded structure: G-quadruplex (four strand are bound together through interactions). The G-quadruplex can be found at each end of chromosomes (packaged and organized structure containing DNA).  In this report, small artificial part (NB) is introduced into guanine (dGNB) and finally into a DNA strand (thrombin binding aptamer (TBA): the sequence is GGTTGGTGTGGTTGG (G is guanine, T is thymine)).  The authors found that the DNA strand bearing dGNB (TBANB) adopt non-folded random coil structure.  In contrast, upon applying reduction stimuli, the small artificial part (showing red in Fig. 1) can be removed completely and immediately to convert from TBANB to TBA and to induce the folding of the DNA strand into compactly folded G-quadruplex.

This simple and versatile strategy could yield a variety of various stimuli-responsive and intelligent oligonucleotides for therapeutic applications in future.