Folding proteins with a pich of salt

The slow but unstoppable progress of evolution has enabled, step-by-step, mutation after mutation, the conquest of almost every possible environment on Earth. Even in those places where conditions are far from “standard”, where the presence of organisms seems unthinkable, life has found its way. These small conquerors are called extremophiles. Thus, we find thermophilic organisms that survive at high temperatures, organisms adapted to the absence of oxygen or extremely acidic conditions, to high pressure… In particular, we will highlight the organisms that adapted to extreme salinity: halophilic bacteria and archaea. The first news of halophilic organisms are found back in the ’30s in the Dead Sea…

But wait, I thought the Dead Sea was so named so named because its high salt concentrations prevented the presence of life in its waters? 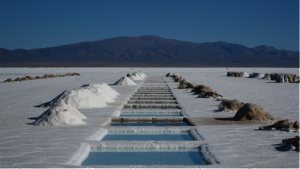 Indeed, but as it turns out, there is life in the Dead Sea. And I am not talking about tourists floating around on its dense waters, but about unicellular microorganisms that have been able to adapt to the huge osmotic stress of living in a virtually salt-saturated aqueous medium. Extreme salt concentrations exert an osmotic pressure that dissecates non-adapted organisms. Halophiles survive by increasing intracellular salt concentration up to 4 M!

That is impressive, but salt is an awful travel companion on biological environments, as it destabilizes and causes irreversible aggregation of the constituent proteins. So, how do halophilic organisms adapt for maintaining a stable and functional intracellular machinery?

Well, good question, italic voice. Proteins belonging to halophilic organisms are virtually identical to those of other organisms. However, their amino acid composition is markedly different. On the one hand, there is an increase of negatively charged and polar residues on their surface, coupled to a reduction in the hydrophobic content. Consequently, halophilic proteins are very stable at high salt concentrations, while maintaining its solubility and functionality.

Fig. 2. Two opposite but complementary mechanisms have been evolutionarily optimized by amino acid selection and cooperate to populate the native form of the protein in high salinity environments.

In a paper recently published in Chemistry and Biology, Ortega et al. study the relationship between amino acid composition and halophilic adaptation. Using molecular biology tools, they mimicked in vitro the evolutionary process in order to design systems of study with different degrees of haloadaptation. By applying biophysical methods and atomic-resolution structural techniques, such as nuclear magnetic resonance spectroscopy, they conducted a comprehensive characterization of halophilic and non-halophilic proteins under conditions simulating those of hypersaline environments. Thanks to this study, they have managed to explain why proteins belonging to halophilic organisms are so stable at extreme salt concentrations.

The action of two opposite but complementary mechanisms confers great stability to halophilic proteins in the presence of high amounts of salt. On the one hand, electrostatic interactions between negative charges and positive cations in solution stabilize the proper folded state of the protein. On the other hand, the increase in polar surface (and the decrease in hydrophobic area) promotes ion exclusion from the surface of the unfolded halophilic proteins, helping to avoid missfolding and aggregation. So, we have two opposite mechanisms: preferential interaction with ions in the folded state against preferential exclusion in the unfolded state. However, the effect of both mechanisms goes in the direction of stabilizing the folded (native) form of halophilic proteins in the presence of salt (Fig. 2.).

So, this study not only answers an interesting biological question, but also highlights the mechanisms involved in the interactions between macromolecule-solvent-cosolute. Their findings may be useful in other fields, such as optimizing enzymes for bioreactors, or agriculture in dry areas. There are also exciting consequences from an evolutionary point of view. The early oceans in which life arose were halophilic-like environments. Could that mean that we are extremophiles? And more interestingly, in recent Mars explorations they found salt water. What if we could find halophilic Martians?