Fracking is fracturing the total environment of the Earth

Hydraulic fracturing (fracking) is often called high-volume (i.e., up to 5 million gallons of water) high pressure (i.e., 10,000 – 20, 000 psi) horizontal hydraulic fracturing, in which horizontal drilling technique is used to recover natural gas or oil from low permeability geologic rocks and specifically shale plays. Fracking, a fast growing industry in the United States, is experiencing a rapid expansion, yielding more than a half of the US natural gas supply and transforming energy supplies in USA. Currently, many countries including USA, Canada, China, and Argentina have applied fracking to the generation of sufficient volume of shale gas and oils. Fracking is significantly disturbing and changing the total environment including the systems of soil and rock (i.e., lithosphere), air and vapor (atmosphere), water (hydrosphere), life (biosphere), and human (Anthroposphere). 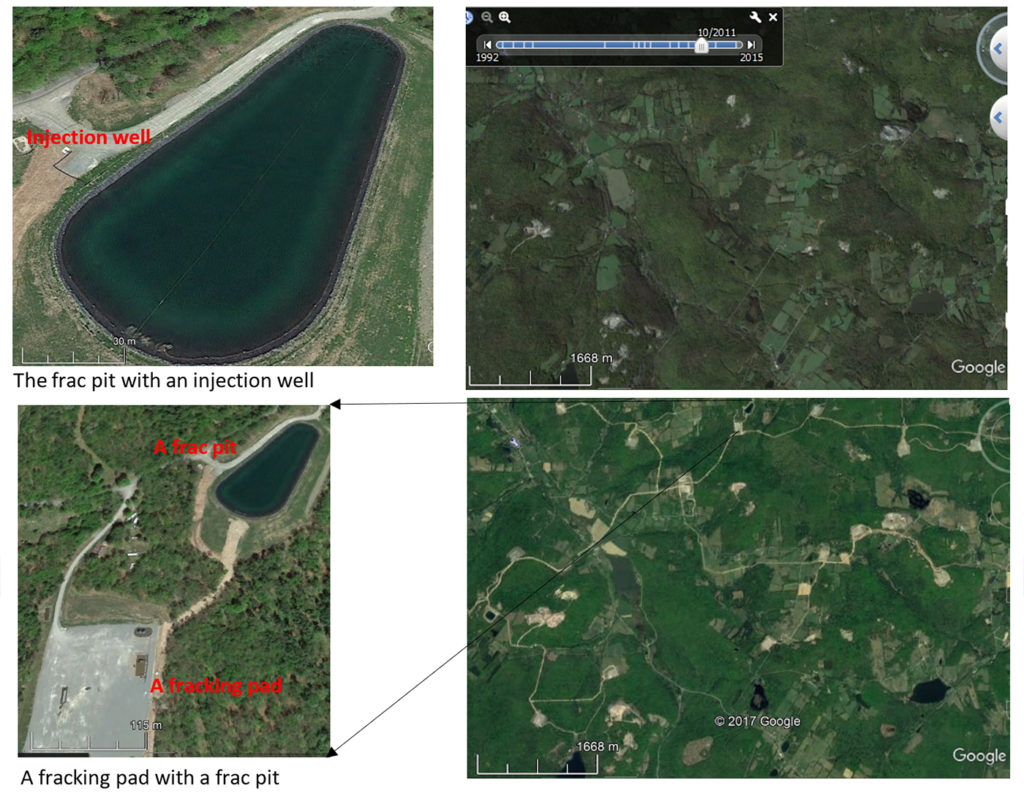 The original biosphere system has been tremendously altered by fracking. For example, Fracking sites typically intrude forest lands, grass lands, and agricultural lands. Deforestation by fracking or converting grassland into fracking pads results in loss of habitats for wildlife and the decrease of species diversity. Soils are quickly dry out and become barren earth after clear-cut, where land surface is easy to be heated during days and fast cools down at night, and therefore microorganism and wildlife are at risk due to the lost habitats.

Large amount methane emission into atmosphere is a significant contribution to global warming and local climate changes. Although a gas power plant produces only about 50% greenhouse gas emission compared with a coal power plant, the Intergovernmental Panel on Climate Change reported that methane is potent for Global Warming Potential (GWP), and if GWP of carbon dioxide is 1, the GWP of methane is 86 and 34 respectively in the time scale of 20 and 100 years.  Additionally, huge amount of methane emission has been detected in the processes of well drilling and fracking; for example, scientists reported that about 6.2% to 11.7% of the total natural gas production emitted into atmosphere in the Uinta Basin.

Fracking generates intensive pressure on local freshwater budget and disorders water cycle in the hydrosphere. Most often, a fracking well needs 2 – 20 million gal of water and proppants of sand and dozens of chemicals. There are more than 7000 fracking wells in Pennsylvania, USA, and the needs of freshwater can significantly affect water budget locally.  Closely located concrete constructions of fracking sites change the land cover that alters surface runoff, streamflow, and thus local hydrological cycle.

Besides the changes of landform in weathering, slope process, and mass movement, fracking significantly fractures the lithosphere. A pressure of 10,000 to 20, 000 psi used in fracking could cause seismic wave changes and introduce small earthquakes. The physical structure and chemical composition of a shale play and the rock layers below and above it then can be permanently changed by fracking.