Fuel from sunlight and the new energy economy

Hydrogen is a clean-burning fuel that is gaining increasing attention as the renewable energy economy continues to evolve. Hydrogen fuel stations appearing in California and the release of a commercial fuel-cell vehicle in mid-2015 by Toyota are testament to an emerging market. The commercial potential is great and the promise of energy independence in countries, such as Japan where carbon-based fuels must be imported, indicate high demand for a future built on a hydrogen economy. Current methods, such as traditional water electrolysis, are too costly to meet this demand on a large scale. A research breakthrough coming out of the University of North Carolina Energy Frontier Research Center for Solar Fuels (UNC EFRC) has the potential to provide a promising alternative. 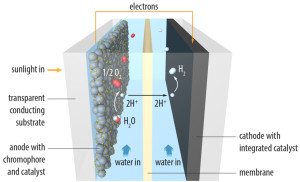 Fig. 1. Graphical depiction of a single photoanode DSPEC. Absorption of light leads to water oxidation at the photoanode by a molecular chromophore–catalyst assembly bound to a nanoITO/TiO2 core/shell film. Electrons are transferred to the cathode through an external circuit and protons diffuse through a proton exchange membrane to the cathode where they are reduced to hydrogen.

Funded by the Department of Energy-Basic Energy Sciences the UNC EFRC includes contributions from 12 research groups in UNC’s Departments of Chemistry and Physics and groups at the University of Florida, Georgia Institute of Technology, Brookhaven National Laboratory, and the University of Colorado – Boulder. Inspired by natural photosynthesis and the concept of the artificial leaf, research at the UNC EFRC has led to the concept of the Dye Sensitized Photoelectrosynthesis Cell (DSPEC; Figure 1), an important approach in the field of Artificial Photosynthesis.

At the heart of the DSPEC are molecules that absorb light and others, catalysts, that facilitate key chemical reactions such as water oxidation to oxygen. Specialized transparent electrodes are used with a semiconductor layer 10,000 times thinner than a human hair, layered over a high surface area film of oxide nanoparticles. When the molecules are paired and attached to these “core/shell” electrode surfaces, they work together to harness solar energy to split water to give hydrogen or convert carbon dioxide (CO2) into carbon based fuels.

Two critical discoveries enabled the development of the first working DSPEC. Each involved the use of a technique called Atomic Layer Deposition (ALD) that facilitates the formation of sub-10nm ultra-thin films of oxide materials. In the first discovery, a core/shell electrode was developed by depositing a 3-4 nm semiconducting layer over conducting nanoparticles. The thin semiconducting layer significantly increased the probability of successfully harvesting electrons from the attached molecules, a critical step towards the formation of hydrogen. In the second discovery, molecules were attached to the surface of the conducting nanoparticles and an ultrathin semiconducting overlayer deposited to protect them from loss from the surface. Surface stabilization enabled water oxidation to occur at neutral to basic pH where the rate of water oxidation is greatly enhanced. 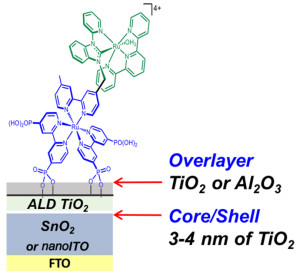 Fig. 1. Graphical depiction of a single photoanode DSPEC. Absorption of light leads to water oxidation at the photoanode by a molecular chromophore–catalyst assembly bound to a nanoITO/TiO2 core/shell film. Electrons are transferred to the cathode through an external circuit and protons diffuse through a proton exchange membrane to the cathode where they are reduced to hydrogen.

In a recent paper published in the Proceedings of the National Academy of Sciences entitled “Visible Photoelectrochemical Water Splitting into H2 and O2 in a Dye-Sensitized Photoelectrosynthesis Cell” a significant improvement on the earlier findings was reported with efficiency enhancements of 3-5 times obtained for water splitting by combining the ALD strategies described above (see Figure 2) and changing the nanoparticle core. Instead of using a conducting core, a semiconductor (tin oxide) was employed with a titanium dioxide shell. Once the molecules had been tethered to the surface, an additional layer of titanium dioxide (or aluminum oxide) was deposited over the molecules to stabilize the surface bonding. The changes resulted in impressive per photon absorbed efficiency increases from 4% to up to 20% with associated solar efficiencies of approaching 1%. An important next step, currently under investigation, is to move light absorption further into the low energy visible region based on inexpensive organic dyes. Significant progress has been made in this area as well with the promise for relatively high solar efficiencies in the future.

A solid foundation in understanding the fundamental processes behind the DSPEC has been established in the UNC EFRC. Looking ahead, a significant effort is now being pursued to translate key discoveries, including the results described here, to explore the scale up and possible commercial potential. The stakes are high but investment in time and resources now will help establish a secure energy future built on solar energy conversion and storage on global scales.

Acknowledgements.
This research is wholly supported as part of the UNC EFRC: Center for Solar Fuels, an Energy Frontier Research Center funded by the U.S. Department of Energy, Office of Science, Office of Basic Energy Sciences under Award Number DE-SC0001011.