Nanotechnology principally deals with engineering or fine tuning of functional matters at their molecular level. The field has generated an exciting scientific attention globally because of the innumerable possibilities it holds. Since it offers opportunities to mold and exploit structures below 100 nanometers, there exist tremendous amounts of application potentials. Nanotechnology has witnessed climb in its path by the emergence of lot many sophisticated techniques including scanning tunneling microscope, magnetic force microscope, electron microscopes etc. This allows researchers to observe and manipulate matter at its atomic level. Parallel advancement in emergence of lithographic techniques in the field of electronic devices allowed researchers to effectively reduce the size of matter and cost of experiments. Nanoscience and nanotechnology could be considered as two interdisciplinary branches of science, both of which are strongly bonded each other. It was during the 10th plan period (2002-2007), the Nanoscience and Technology Mission (NSTM) was put forward which was later upgraded during succeeding 11th plan (2007-2012) which included an another initiative known as ‘Nano mission’. This initiative later on caused India to be one of the top five nations around the world in contributing great number of research and publications about nanoscience and technology. Nanotechnology involves broad range of tools and techniques which tenders huge level of applications in various scenarios like water purification devices, medical diagnosis and therapies, energy sources, long lasting building materials and utensils, food and agriculture, electronics etc. 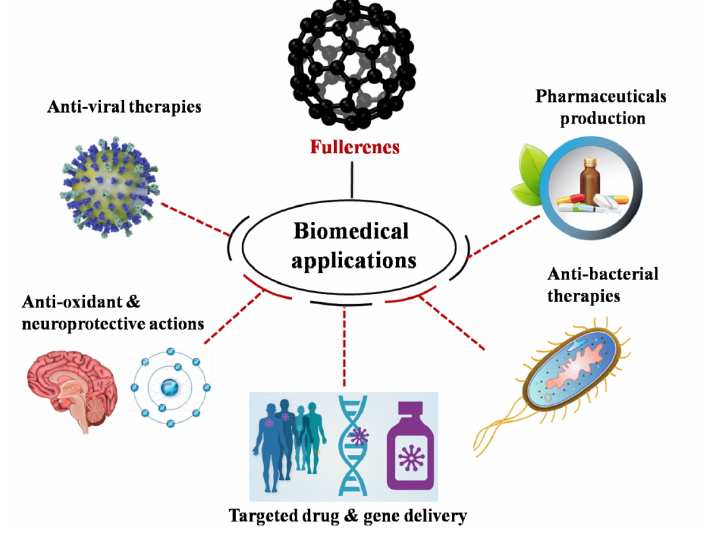 The convergence of scanning electron microscope (invented in 1981) and fullerene cages (1985) have brought greater advancements in nanotechnology during the late 1980’s. Fullerenes are allotropes of carbon which has been considered as relatively novel category of molecules in nanotechnology family. Contrasting to other carbon allotropes like graphite and diamond, it has got certain unique characteristics including hollow carbon cage structure and geometrical features. Structurally fullerenes consist of round shaped organization bearing number of hexagons and pentagons bonded tightly together. In 1985, the first molecule of pure fullerene was invented by a panel of scientists, Richard Smalley, Robert Curl, James Heath, Sean O’Brien and Harold Kroto at Rice University and they named it as Buckminster fullerene (C60) due to its resemblance with a Bucky ball structure. For this splendid discovery, the panel won Nobel Prize for Chemistry in 1996. The experimentation for this involved, vaporization of solid graphite using a laser source followed by chilling down using helium ions. Other simpler method of generation of fullerenes include from fuel flame of certain hydrocarbons. This could bring large amounts of impure fullerene forms comprising C60 and C70 in an indefinite ratio. Reports are available on the context that this fullerene soot fine powder is capable of imposing scrotal cancer in chimney sweepers.

Such wide range of applications of fullerenes and related compound further necessitates their toxicity evaluations in model systems. Simultaneous existence of contrasting reports regarding fullerene toxicity in different in vitro and in vivo environments adds increased requirement of a deepened knowledge on the same.  Present study elaborates an in vitro toxicity evaluation of fullerene soot nanoparticles in C6 glial cells. From the available literatures suggesting limited hydrophilicity of fullerenes, an effective polymer functionalization was employed using dextran. Followed by proper physico-chemical characterization of the functionalized fullerene using different techniques, an array of in vitro assays was performed to analyze the level of neurotoxicity. Distinct peaks obtained for FT/IR analysis confirmed effective funtionalization of fullerne soot with dextran (denoted as dex-FS). Also, nanometer size was found to be maintained even after functionalization as per transmission electron microscopic observation. Homogenous distribution and colloidal stability of the compound were also confirmed.

Initial cytotoxic response of dex-FS was evaluated using MTT and Neutral Red Uptake assays using different concentration of dex-FS (5, 10, 20, 40 and 160µg/ml) prepared in DMEM. Both the assays suggested a dose and time dependent toxicity in which a statistically significant observation was observed from 40µg/ml onwards. Morphological perturbations were analyzed by both non-fluorescent (Coomassie Brilliant Blue) and fluorescent (Rhodmine Phalloidin) stainings; both of which showed marked alterations within the cytoskelatal integrity of the cells exposed with higher concentrations (160µg/ml) of dex-FS. Organization of actin filaments was found to disturbed at this dose. Sub-cellular organelles were evaluated for their functionalities wherein lysosomal integrity was analyzed via Acridine orange staining. Consistent with observation of morphology analysis, lysosomal stability of the cells were found to lose at higher dosage with a sharp shifting of absorbance spectra from red to green in lysosomal compartment. Similar observation was obtained for JC1 staining, denoting marked loss of mitochondrial membrane potential at higher tested concentrations.

Despite the information from certain literatures saying free radical scavenging activity of fullerenes, present study observed increase in cellular oxidative stress as the dose of dex-FS increased. Amount of ROS was markedly elevated as the dose increased. Calcein-AM/PI staining was performed for analysis of live-dead pattern of dex-FS exposed cells.  Quantitative analysis of this further demonstrated marked cell death at higher concentrations. Influence of dex-FS in nuclear premises of glial cells was analyzed using DAPI staining and DNA laddering assay via gel electrophoresis. Surprisingly, dex-FS did not induce any nuclear toxicity as it failed to cause any laddering of DNA strands except some minute level of chromatin condensation. Any bands representing broken DNA was not observed in gel; suggesting non-genotoxic response. An illustration representing overall impacts of dex-FS in C6 cells if given in Figure 2. 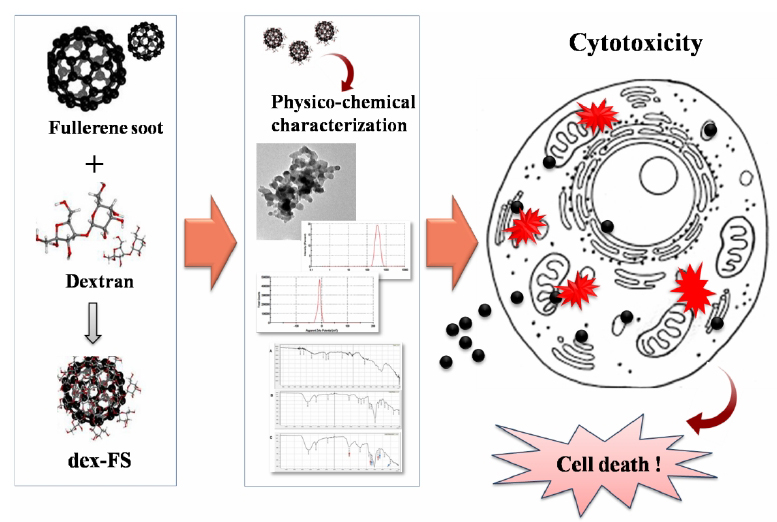