Retinal ischemia is a condition involved in several prevalent retinal degenerative diseases such as glaucoma and diabetic retinopathy, which cause visual impairment and blindness. Current research focuses on the development of neuroprotective strategies against ischemic retinopathies, but no effective therapy is available yet. Enriched environment (EE) is a stimulation paradigm that boosts sensory, social, and cognitive activity, and favors voluntary physical exercise due to a more complex housing conditions than standard laboratory housing (standard environment, (SE)). EE consists of bigger cages containing running wheels, ladders, and different objects relocated every day to maintain novelty and enhance exploration. Although the adult retina was considered less susceptible to experience-dependent plasticity than other central areas like the hippocampus or the brain cortex, we have demonstrated that EE housing protects from alterations induced by experimental retinal ischemia, glaucoma, type 1 diabetes, and optic neuritis. Moreover, intact animals previously exposed to EE show increased resilience to retinal acute ischemia. Designing therapeutic strategies against human retinal diseases requires identifying which EE components trigger neuroprotection. In this study, we aimed to dissect the individual contribution of EE´s components to retinal neuroprotection against acute retinal ischemic damage in adult rats. 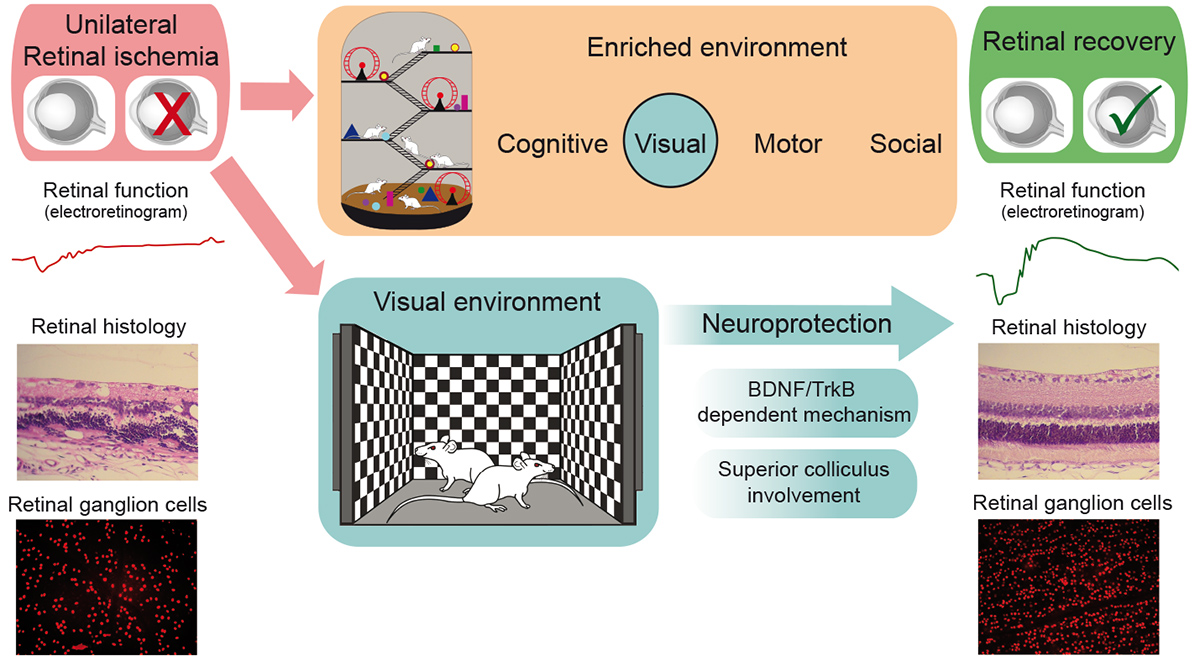 Initially, cognitive or social contributions were examined by adding novel objects or more animals to SE housing, respectively. Both housing conditions were ineffective for retinal protection. The contribution of the visual input was analyzed in animals with unilateral or bilateral retinal ischemia. EE housing did not induce retinal recovery in animals submitted to bilateral ischemia. This loss of neuroprotection was not due to locomotor activity differences, since animals with bilateral or unilateral retinal ischemia showed a similar locomotor activity profile in EE to that of intact animals. Thus, we hypothesized that visual stimulation could be a key contribution for retinal protection. Animals submitted to unilateral ischemia were housed in a visual environment (VE) or standard visual environment (SVE). VE consisted of standard laboratory cages surrounded by four monitors that projected high-contrast stimuli, to maximize retinal ganglion cell (RGC) stimulation, whereas SVE consisted of a similar setup, but monitors projected a constant grey background. Consistently with the effects of EE, VE housing, but not the SVE, avoided ischemia-induced retinal dysfunction, retinal thickness reduction, and RGC loss. Furthermore, both EE and VE increased the levels of brain-derived neurotrophic factor (BDNF), one of the most potent neuroprotectants of RGCs, which is strongly associated with neuronal activity. An antagonist of TrkB receptors blocked VE-induced protection against retinal ischemia. These results suggest that the visual input in at least one eye could be a necessary condition for the EE-evoked protection against retinal ischemia. Retinal stimulation benefits in the non-ischemic eye could be transmitted to the ischemic eye through the superior colliculus (SC), the main retino-recipient target in rodents. c-fos is an early gene expressed following sensory-evoked neuronal activity. EE or VE (but not SE or SVE) increased the number of c-fos positive nuclei in both SC from animals submitted to unilateral ischemia. In contrast, no upregulation of c-fos was observed in either SCs from animals with bilateral ischemia housed in EE. In summary, for the first time, we demonstrated that visual stimulation is a powerful stimulus for driving neuroprotection against retinal ischemia. These results provide evidence that visual stimulation could be a non-invasive and rehabilitative therapy for human visual disorders with a retinal ischemic component.