The process by which a single cell, the zygote, becomes a fully formed organism has been a historic scientific enigma. Now we know that the information stored in the genes of the DNA is the responsible for the success of development. However, not all the genes function all the time; they act only when they are turned on. Silent genes in the cells can be switched on; active ones can be shut off. Such genes, stimulated or deactivated, can produce or not proteins that alter both the shape and the behavior of each cell. The turn on or shut off of genes depend on both particular DNA sequences that bind regulatory proteins and the local structural conformation of DNA. It is known that DNA can adopt alternative structures different from the broadly known helical duplex architecture discovered by Francis Crick and James Watson in 1953. Alternative DNA structures, although less familiar than duplex DNA, are not less biologically relevant since they have functions that go beyond storing and transmitting genetic information. They usually represent regions susceptible to genomic instability (DNA breakages related to genetic diseases) or with relevant functions in key biological processes such as DNA replication (DNA copy) and transcription (the first step in gene expression). 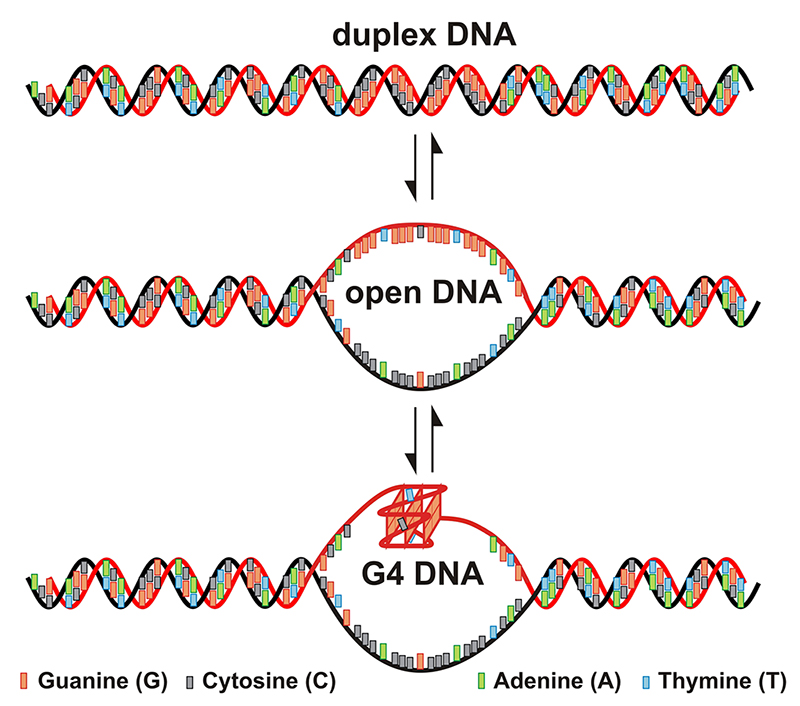 Fig. 1. Schematic representation of the formation of G4 DNA from duplex DNA. Open DNA is an intermediate transient form.

Among several types of alternative DNA forms, guanine quadruplexes (G-quadruplexes or G4) have been one of the most renowned in the last 15 years. G4 are formed by four DNA strands (i.e. they are tetraplex structures) and involve only one kind of the four DNA bases: the guanine o G. Although the chemical formation of G4 was experimentally evidenced by the end of 19th century and their structure determined in 1962, G4 have long been dismissed by many biologist probably because they are transient and difficult to identify in living cells. In the last two decades, scientific interest on G4 has blossomed since they readily form under cellular physiological conditions. Besides, recent compelling evidence has shown how G4 may be essential players in many biological processes requiring transient disassembly of the DNA duplex, such as expression control of oncogenes (genes which abnormal activity lead to aberrant cell proliferation and the formation of tumors). During gene transcription, DNA duplex is transiently disassembled, leading to G4 formation in G-rich DNA sequences. G4 may act as knots impeding duplex re-formation (Fig. 1), thus regulating gene expression.

In a recent paper published in Nucleic Acid Research, David et al. used computational and experimental analyses to find several genes containing evolutionarily conserved G4 that function as switches to regulate genes expression in vivo during embryonic development (Fig. 2). In this study zebrafish was used as an animal model because it uses almost the same gene circuits than other vertebrates, including humans. Notably, this is the first work reporting that G4 contribute to the regulatory network that orchestrates the success of a complex process in a whole live organism.

Fig. 2. This figure shows that noggin 3 (nog3), a gene involved in the formation of cranial cartilages and bones during development, is regulated by G4. A. Scheme of the strategy to specifically block G4 formation and reduce nog3 transcription using an antisense oligonucleotide (nog3-ASO). B. Figure showing that cartilages (dark blue stain) of embryos treated with nog3-ASO display reduced head structures compared to normal embryos (CTRL). C. Figure showing that the expression of nog3 (dark violet stain) is reduced in embryos treated with nog3-ASO compared to normal embryos (CTRL).

The involvement of G4 in the development of tumors has led pharmaceutical industry to focus in the design of specific molecules directed to G4 in the search of anti-cancer drugs. However, up to now there are no drugs capable of discriminating between G4 that control oncogenes from those ones controlling other genes. In an attempt to solve this issue, the authors developed a novel strategy consisting of the use of short antisense DNA sequences or oligonucleotides (ASO) that block the formation of a specific G4 (Fig. 2A) controlling a particular gene. This strategy may be used as a more directed tool for the intervention of the G4 that control oncogenes activity, and would emerge in future as an alternative to selectively inhibit tumor cell proliferation.