Ganglioneuromatosis of the canine gallbladder

Ganglioneuromatosis (GN) is a rare, poorly demarcated, multinodular to diffuse, exuberant hyperplastic proliferation of ganglion cells and nerves of the autonomic nervous system. Human GN may occur anywhere in the alimentary tract from the oral cavity to the rectum, but is reported most commonly in the colon. Ganglioneuromatosis of visceral organs, including lung, liver, urinary bladder and pancreas, has also been documented occasionally. GN of the gall bladder is very rare. In animals, GN is a diffuse lesion originating within the myenteric plexuses and confined to the gastrointestinal tract. Ganglioneuromatosis of the gallbladder with no intestinal involvement has not been reported previously in animals. 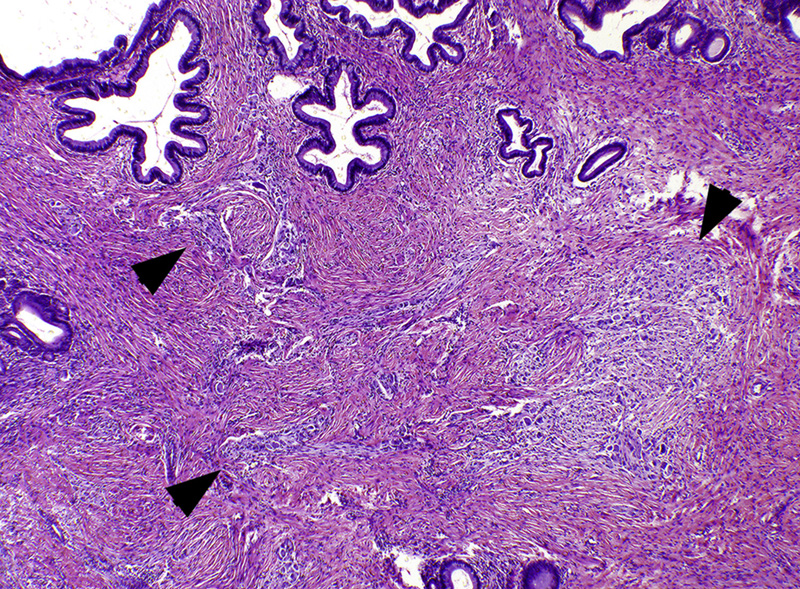 A 2-year-old entire female mixed-breed dog was presented with signs of cholestasis. Abdominal ultrasonography revealed a gallbladder with a thickened and hyperechoic wall and luminal calculi. On exploratory laparotomy, the gallbladder and the walls of the cystic duct were found to be indurated and fibrotic and biopsy samples were taken for histological examination. Microscopically, numerous foci of neural elements were scattered throughout the deep mucosa and extended as streams and nodular aggregates into the mid and superficial lamina propria and subepithelial tissue (Fig. 1). They consisted of convoluted nerves with a thickened perineurium and elongated cells with abundant eosinophilic, fibrillar to foamy cytoplasm, compatible with bundles of axons or Schwann cells. These enlarged nerves were accompanied by many polygonal neuronal cell bodies with faintly visible cell borders, abundant basophilic cytoplasm and large, round-to-oval, often eccentrically located, vesicular hypochromatic nuclei containing a single prominent nucleolus (Fig. 2A). Profiles of submucosal nerve plexuses were increased in size and number. Fibrosis surrounding the nerve elements (Fig. 1) and a mild to moderate, diffuse, chronic inflammatory infiltrate composed of lymphocytes, plasma cells and scattered neutrophils and macrophages was also present (Fig. 2A).

The neural nature of these components was confirmed by immunohistochemical labelling with antibodies specific for synaptophysin, glial fibrillary acidic protein, S100 protein and neurofilaments. The spindle-shaped and elongated cells were mildly to moderately positive for S100 and glial fibrillary acidic protein, consistent with Schwann cells. The ganglion cells and elongated structures morphologically consistent with cell projections and axonal processes were strongly positive for neurofilaments (Fig. 2B) and synaptophysin. Based on these findings, the lesion was diagnosed as mucosal ganglioneuromatosis.

Fig. 2. Detail of polygonal neuronal cell bodies within the superficial lamina propria of the mucosa, hematoxylin and eosin stain (A). Anti-neurofilaments antibody strongly labels the fibrillary background in addition to the cytoplasm of ganglion cells (arrows), immunohistochemical staining (B).

The case presented herein is notable because it arose in an adult dog with no signs of gastrointestinal disease and predominantly affected the lamina propria of the gallbladder. The pathogenesis of GN remains uncertain. An abnormal stimulus, such as overproduction of neural growth factors or decreased expression of the phosphatase and tensin homologue (PTEN) gene, has been demonstrated in some human patients with GN. Duplication of PTEN has been suggested to underlie intestinal GN in the dog. Intestinal GN is classified in humans further by the histopathological distribution of the hyperplasia into two variants: transmural and mucosal. Mucosal GN, although rarer, appears to have a more favourable prognosis than transmural GN. Lesions in adults are typically mucosal suggested that GN in dogs and man has a similar bimodal distribution, relating to the underlying pathogenesis.

In summary, our observations indicate that GN can occur in extra-intestinal sites in dogs, mimicking human GN. This is the first description of gallbladder GN in an animal.