Hearing loss is the most common congenital sensory deficit. About 1-3 in 1000 children are affected at birth or during early childhood by severe hearing loss, which is defined as prelingual deafness, with at least half of all cases attributable to genetic causes. Mutations in GJB2 and GJB6, which encode connexins 26 and 30 (Cx26 and Cx30) involved in inner ear homeostasis, are found in patients with autosomal dominant or recessive non-syndromic hearing loss. Beside these non-syndromic forms of deafness, GJB2 and GJB6 mutations also cause several types of skin disorders which are associated or not with hearing deficits. 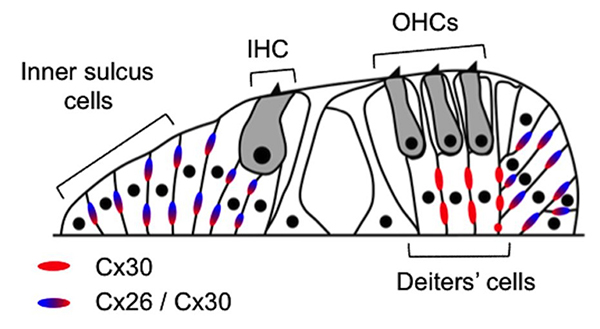 In mammals, sounds are perceived through mechanosensory hair cells located within the sensory epithelium of the cochlea (i.e. the organ of Corti). Within the organ of Corti, sensory inner and outer hair cells, and non-sensory supporting cells are organized in a regular mosaic pattern that extends along the basal-to-apical axis of the cochlear duct. Cx26 and Cx30 gap junction proteins allow the rapid removal of K+ away from the base of sensory hair cells, resulting in the recycling of this ion back to the endolymph to maintain cochlear homeostasis. However, gap junctions may serve additional roles in the cochlea, such as providing networks for nutrient transfer. In the cochlea, Cx26 and Cx30 assemble in two types of gap junctions, which form a syncytium extending from the spiral limbus to the cochlear spiral ligament. On the one hand, Cx30 is expressed as homomeric channels in Deiters’ cells, i.e. the supporting cells which surround the outer hair cells. On the other hand, Cx30 co-assembles with Cx26 as heteromeric channels in other supporting cell types (Fig. 1). Although these two channel components are well characterized, the gap junction plaque assembly mechanisms occurring in situ remain largely unknown. Beside mutations that affect the channel function itself, many of the disease-causing mutations in GJB2 or GJB6 impair the trafficking and assembly of Cx26 and Cx30, what prevents the formation of gap junctions. Thus, deciphering the processes of gap junction biogenesis occurring in situ when Cx30 is expressed as homomeric or heteromeric channels with Cx26 should represent an advance in understanding the pathogenic significance of these mutations. 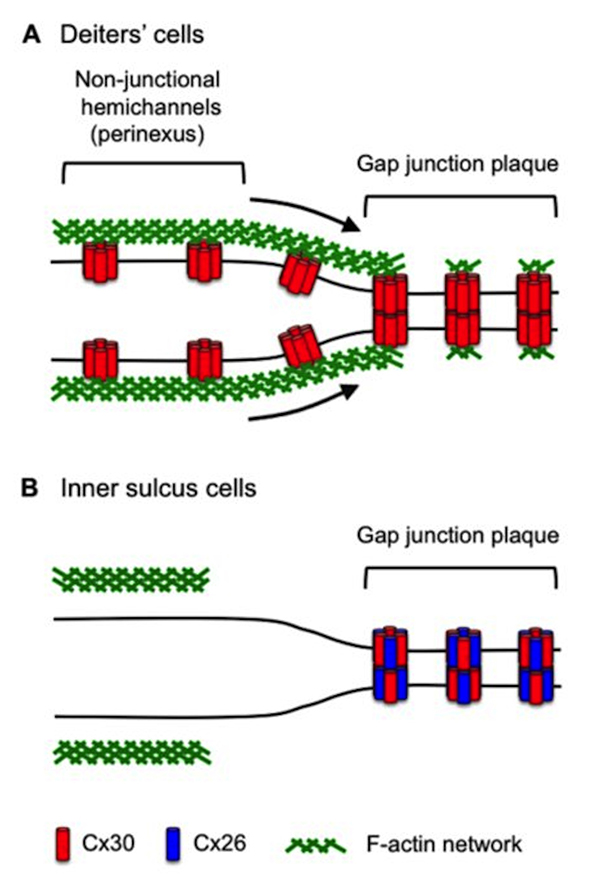 Gap junction assembly usually occurs in a kind of “ two-step mechanism ”. First, hexameric connexons assembled in the trans-Golgi network are trafficked to the non-junctional plasma membrane. Secondly, hemichannels associate with the cortical actin through actin-binding proteins zonula occludens (ZOs) which regulate delivery of connexins from the periphery to the gap junction plaque (GJP). This peripheral membrane region containing non-junctional hemichannels and surrounding the gap junction plaque is called “perinexus”. Because of the relatively short half-life of connexins (usually 1 – 5h), the junctional plaque is in a dynamic state, constantly remodeled through both recruitment of newly synthesized connexons to the periphery and endocytosis of older components from the center of the plaque.

We have shown that cochlear Cx30 exhibits distinct gap junction assembly mechanisms when expressed as homomeric or heteromeric channels with Cx26. In Deiters’ cells, homomeric Cx30 preferentially interacts with the b-actin isoform in the perinexus of the GJP. Moreover, the assembly of Cx30 into GJPs is strongly disturbed in the presence of actin-depolymerizing drug. In inner sulcus cells, in contrast, Cx26 / Cx30 heteromeric GJPs are devoid of adjacent perinexus and associated actin network, and they resist to treatment with actin-depolymerizing drug. Overall, our data provide a novel insight into homomeric and heteromeric GJP assembly in the cochlea.