Ultrasound (US) is used for clinical diagnosis and therapy. Microbubbles (MBs) as US-contrast agents are applied to detect micro blood flow or specific lesions. Recently, the combination of MBs and US has received much attention for drug delivery. US induces MB oscillation or collapse in some conditions, and the behavior of MBs can enhance vascular permeability. Therefore, the combination of MBs and US has the potential to selectively deliver drugs to the tissue exposed to US. 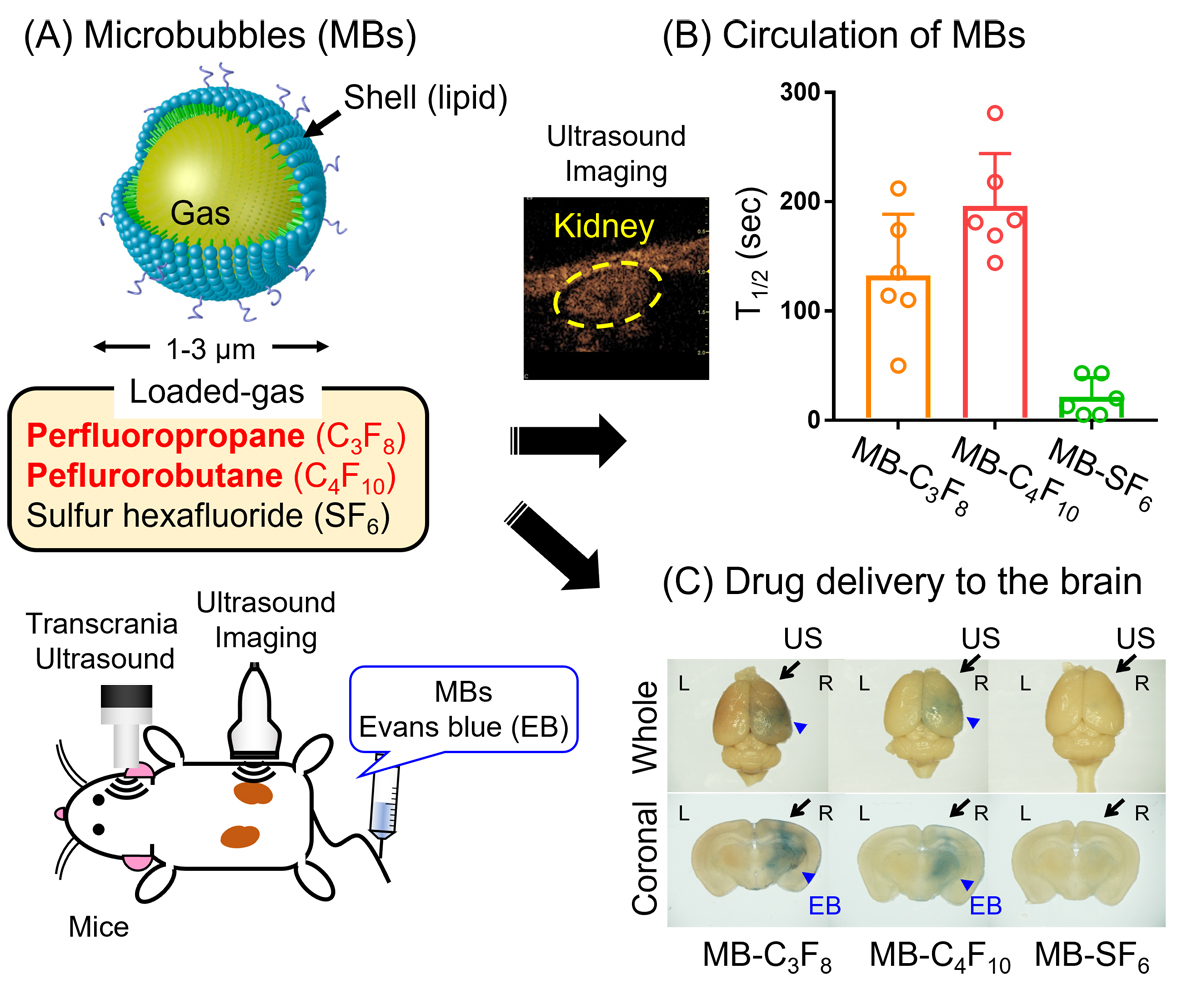 Fig. 1. (A) Schematic of microbubbles (MBs). The structure of MBs is an inner gas covered with phospholipid of a micro size. (B) Circulation of MBs. MBs (1 × 106 particles) were injected into mice via their tail vein. The echogenicity of MBs in the right kidney was observed using an ultrasound (US) imaging device. The relative brightness in each time was calculated as follows: relative brightness = brightness in each time/maximum brightness. The half-life of echogenicity was defined as a time when relative brightness becomes 50%. (C) Drug delivery to the brain. The mixture of MBs (3 × 109 particles/kg) and Evans blue (EB) (100 mg/kg) was injected into mice via their tail vein, and transcranial US was immediately applied to the right side of the brain. After 1 hour, the brain was collected, and the whole brain and the coronal section were observed.

In this study, we prepared lipid-based MBs containing perfluoropropane (C3F8), perfluorobutane (C4F10), or sulfur hexafluoride (SF6) with the same phospholipid shell (MB-C3F8, MB-C4F10, or MB-SF6) and examined the effects of each MB on brain-targeted drug delivery.

The average diameter of each gas-loaded MB was approximately 2.5 µm. Therefore, the effect of the size of MBs on brain-targeted drug delivery would be excluded. We first evaluated the stability of MBs in blood flow because MBs need to reach to the brain. MBs were injected into mice, and the echogenicity in their kidneys was measured using a US-imaging device. As a result, the half-life of echogenicity of MB-C3F8 and MB-C4F10 was longer than that of MB-SF6 (Fig. 1B). The solubilities of C3F8 and C4F10 in water are lower than that of SF6. SF6 can be easily dissolved in a solution outside MBs, resulting in the reduced stability of MB-SF6. This result suggests that MB-C3F8 and MB-C4F10 could circulate in the blood for a long time and are expected to increase the likelihood of creating a BBB opening. Next, we examined the delivery efficacy of Evans blue (EB), which is a model drug with a blue color, to the brain. The mixture of MBs and EB was injected into mice, and transcranial US was immediately applied to the right side of the mice’s brains. After 1 hour, the brain was collected and observed. When MB-C3F8 and MB-C4F10 were administrated, EB was distributed in wide areas of the brain compared with MB-SF6 (Fig. 1C). In addition, we confirmed no hemorrhage or neuron degradation in the brain after the MBs and US treatment. These results suggest that MBs containing C3F8 or C4F10 can efficiently deliver drugs into the brain.

In conclusion, we prepared MB-C3F8, MB-C4F10, and MB-SF6 with identical outer shells and similar sizes and demonstrated that MB-C3F8 and MB-C4F10 could efficiently deliver EB into the brain with US. Our results suggested that C3F8 and C4F10 are useful for developing MBs to achieve efficient brain-targeted drug delivery.