Prostate cancer is one of the most common cancers among men. The American Cancer Society estimates that there will be 220,800 new cases of prostate cancer in 2015 and 27,540 prostate cancer related deaths. The National Cancer Institute’s SEER database shows that the 5-year survival rate for metastatic prostate cancer is only 28%. Cancer metastasis – the spread of cancer from a primary tumor to sites throughout the body – is the most important rate limiting step leading to death. The hallmarks of metastasis are primary tumor invasiveness, the acquisition of a vascular blood supply (tumor angiogenesis), and tumor cell invasion and growth at the distant site. Understanding how tumor cells become invasive is fundamentally important to developing strategies to stop that process. 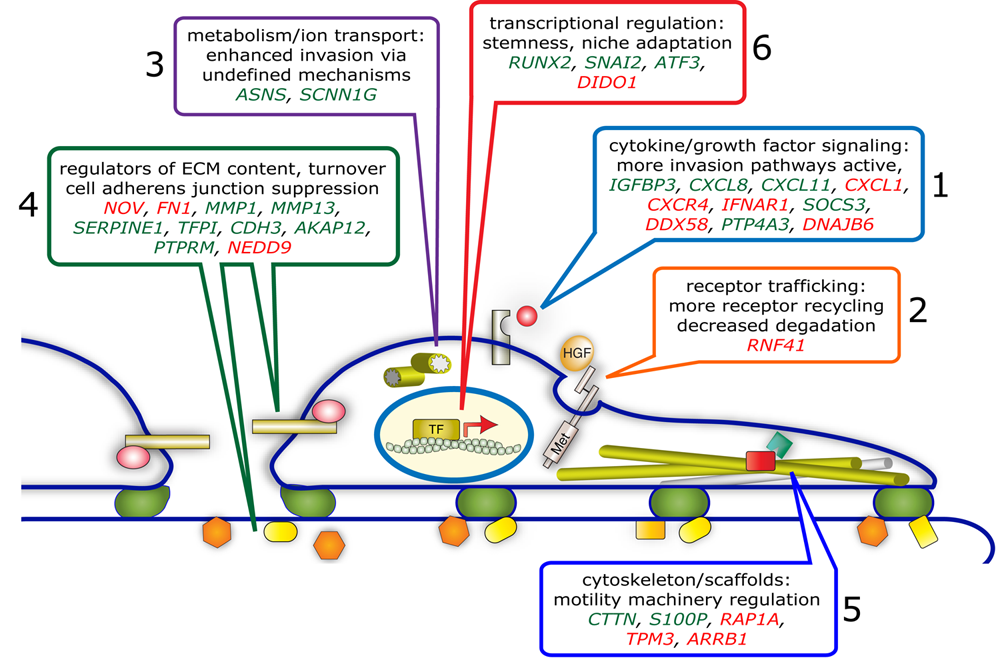 Schematic depiction of functional categories and primary component genes comprising the HGR/MET invasive program. Genes modulated 2-fold or greater in PC3Mcells by treatment with HGF family members were subjected to Ingenuity Pathway Analysis (IPA). IPA revealed significant overlap between a subset of 32 gene modulation events and functional networks associated with cell migration, invasion and tumor metastasis. These 32 genes (upregulated in red, downregulated in green) were organized into the 6 functional categories depicted above which act on specific subcellular systems to provide a robust and enduring motogenic response.

A protein called hepatocyte growth factor (HGF) is a critical regulator of invasiveness in many cancers, including prostate cancer. In fact, most growth factors regulate other cell activities besides growth, such as cellular metabolism and migration, but are named on the basis of how they were originally discovered; this multiplicity of action is called pleitropism. HGF regulates cell proliferation, but also regulates migration, invasiveness and even angiogenesis, making the subversion of HGF activity in cancer dangerous in many respects. However, HGF is also important in promoting survival, immunity and repair in normal tissues, so blocking all HGF activity throughout the body as an anti-cancer strategy is a compromise. Blocking only the harmful HGF effects while maintaining its positive attributes could potentially block tumor metastasis while maintaining systemic health; to reach this ideal we have to understand the molecular basis of HGF pleiotropism. Remarkably, the nature of HGF itself affords a unique opportunity to just that: the HGF gene encodes five distinct protein isoforms and one, known as NK2, is special in that it drives only cell motility and invasion, but not cell proliferation.

Cecchi et al. exploited this difference in biological activity by performing a global comparison of gene expression changes driven by HGF and NK2 in a prostate cancer cell line which, when implanted into mice, mimics the process of primary tumor growth and robust metastatic spread. Gene expression changes were identified using arrays that contain ~54,000 probes to follow ~30,000 genes. Analysis of 36 such arrays covering multiple time points for each HGF isoform, a total of ~1.9 million measurements, ultimately revealed 345 genes whose expression change distinguished motility and invasion from other HGF biological effects. Many of these expression changes occurred in genes with known or suspected roles in controlling motility or invasion, and some were recognized contributors to prostate cancer progression. Cecchi et al. then compared this gene set with those gathered from patient samples analyzed as part of The Cancer Genome Atlas project of the National Institutes of Health. They found that 24 of the 345 HGF-driven, invasion-associated gene expression changes which also occurred in a collective majority of 85 prostate cancer cases had significant impact on patient survival. Of the 24, only 1 gene expression change was associated with prolonged survival, whereas 23 were associated with significantly decreased disease-free patient survival. Moreover, these 23 changes also co-occurred in the same patients with strikingly high frequency. These findings support the likelihood that “master switches” controlling these gene expression changes such as HGF are critical drivers of prostate cancer metastasis and provide guidance for the development of better diagnostics and therapeutics for this important disease.