Biofuels have attracted increasing interest due to economic, geopolitical and environmental concerns caused by fossil fuels. It has been proposed as a renewable, sustainable and environmental-friendly fuel to replace fossil fuel or be used as fuel additive. Currently, ethanol fuel produced from microbial factory through fermentation using corn as the feedstock takes the major market share of biofuel. However, there are still several issues of producing ethanol fuel from food feedstock (e.g., corn and sugar cane). Firstly, it raises the issue of competition with human food. Secondly, ethanol contains relatively low energy density. Compare to ethanol, butanol fuel has been considered to be a more advanced fuel than ethanol. It has much higher energy density, and has similar fuel properties to gasoline with a longer hydrocarbon chain. Therefore, it becomes attractive to produce the next-generation biofuel, such as butanol fuel, from low-cost plant cellulosic biomass, which is the most abundant biomass on the earth, being considered as renewable, sustainable and economical. 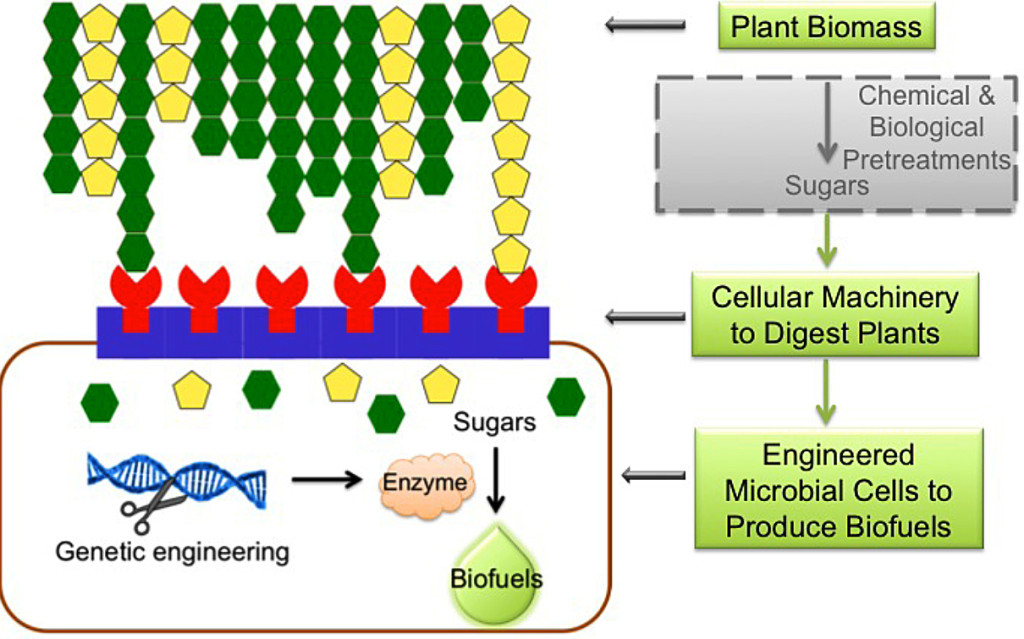 In our study, we genetically engineered a bacterium, Clostridium cellulovorans, for production of biofuel, including butanol and ethanol fuel, directly from cellulose without pretreatments. We chose C. cellulovorans as the host for genetic engineering mostly because it has strong cellular machineries to digest plant cellulosic biomass efficiently, called cellulosomes. They are enzyme complexes on cell surface, functioning as scissors to chop plant cellulosic molecules into single units, such as glucose, which can be taken up by the cells for metabolism. However, C. cellulovorans itself does not produce biofuels as its metabolites. To solve this problem, we need to genetically engineer C. cellulovorans to produce a foreign enzyme for biofuel synthesis, which can catalyze the reactions for biofuel production from sugars (shown in the Figure). However, there has been no developed method for genetic engineering of C. cellulovorans, since it has a very strong defensive machinery to digest foreign DNAs that enter the cells. In other words, the foreign DNAs containing the genetic information of the enzyme for biofuel synthesis would be digested when they are transferred into the cells. To overcome this obstacle, we developed a novel method to modify the DNAs with the same pattern as the DNAs of the host cells. As a result, the host cells could not recognize the foreign DNAs. And thus they could be translated into the functional enzyme for biofuel synthesis. For the first time, the engineered C. cellulovorans was able to produce butanol and ethanol with high-yield directly from cellulose without any pretreatments, comparable to ethanol yield from corn glucose by yeast fermentation.

Overall, we have demonstrated a breakthrough in direct cellulosic biofuel production at significant titer and yield, by generating the microbial factory of C. cellulovorans. Thus, the engineered C. cellulovorans can provide a promising platform for sustainable and economical biofuels production.