Composed of billions of neurons, the brain is the most complex organ that dictates our daily lives. Naturally, understanding the brain is one of the final frontiers that would not only provide basic understanding but also sprout hope for those suffering from neuropsychiatric and neurological disorders. Neurons communicate using electrical and chemical signals and form intricate dynamic circuits that are constantly and tightly regulated under normal conditions. The fast neuronal electrical activity is measurable as changes in the constantly fluctuating cell membrane potentials (voltage activity), thus by monitoring voltage activity during behaviour it is possible to identify the collections of neurons involved to generate behaviour as well as monitoring how their activity is modulated under both normal and diseased conditions. 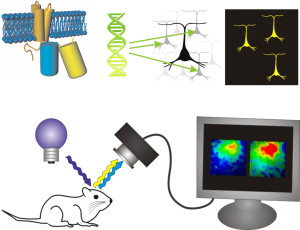 In order to resolve the above issues, large efforts have been invested into developing genetically encoded voltage indicators (GEVIs). These are proteins that can be present on neuron cell surfaces, containing a voltage-sensing domain (a protein segment that naturally detects changes in voltage) and one or more fluorescent proteins (natural or synthetic proteins that emit fluorescence with distinct colours when supplied with enough light energy). To date, a palette of GEVIs have been developed with different colours and properties to facilitate (neuro)scientists to begin exploring the causal brain networks and dynamics underlying behaviours with unprecedented accuracy using transgenic models, where the presence of these GEVIs can be restricted to specific neuronal types (amongst many different co-existing kinds with varying characteristics). Using this approach, novel insights into brain functions are beginning to be unveiled, including how particular stimuli (e.g. visual) are represented in the brain.

In our article, we review the progress and obstacles that had been overcome in GEVI development, provide an overview of the exciting neuroscience areas that can be explored using established GEVIs, and provide a perspective on the challenges that lies ahead.