A group of sight-threatening inflammatory diseases of the eye, in which the immune system inappropriately recognizes and attacks the retina and adjacent structures, is known as non-infectious, or autoimmune, uveitis. Lymphocytes of the patients in fact recognize proteins from the eye, as if they were a foreign substance. Some forms of the disease respond poorly to treatment and it is estimated that autoimmune uveitis is responsible for 10-15% of blindness in the Western world. In most cases it is unknown what causes the immune system to attack the retina. A better understanding of the disease, its causes and its progression, could help to devise better treatments. However, mechanistic studies in humans are severely hampered by practical and ethical considerations. Scientists therefore must turn to animal models, which reproduce various aspects of human disease.

Our laboratory over the years has developed animal models of uveitis by exposing laboratory rodents to proteins from the retina. These evolutionarily conserved proteins, which are involved in the process of vision, are unique to the eye and are not found elsewhere in the body. In the “classical” model of uveitis in normal (wild type) mice, a susceptible rat or mouse is immunized with a retinal protein or its fragments, and several weeks down the line, the animal will develop uveitis. This is a good model for some types of studies, e.g. evaluation of new therapeutic agents, but it has limitations. Animals are immunized with retinal protein in conjunction with additional stimulatory agents, known as adjuvants, that potentiate the immune response in a way that may not be physiological. Moreover, natural triggers of the disease cannot be studied in a model where we ourselves deliver that trigger. Therefore, we sought to develop a model of uveitis in which the disease would develop by itself, without artificial external stimuli. We developed such a spontaneous model by genetically engineering mice to harbor a higher than normal number of lymphocytes that recognize a retinal protein. The engineering process involves transfer of genes that encode the recognition system of lymphocytes, known as T cell receptor (TCR). In this case, the TCR is specific for the interphotoreceptor retinoid binding protein (IRBP), a major protein residing in the photoreceptor layer of the retina. 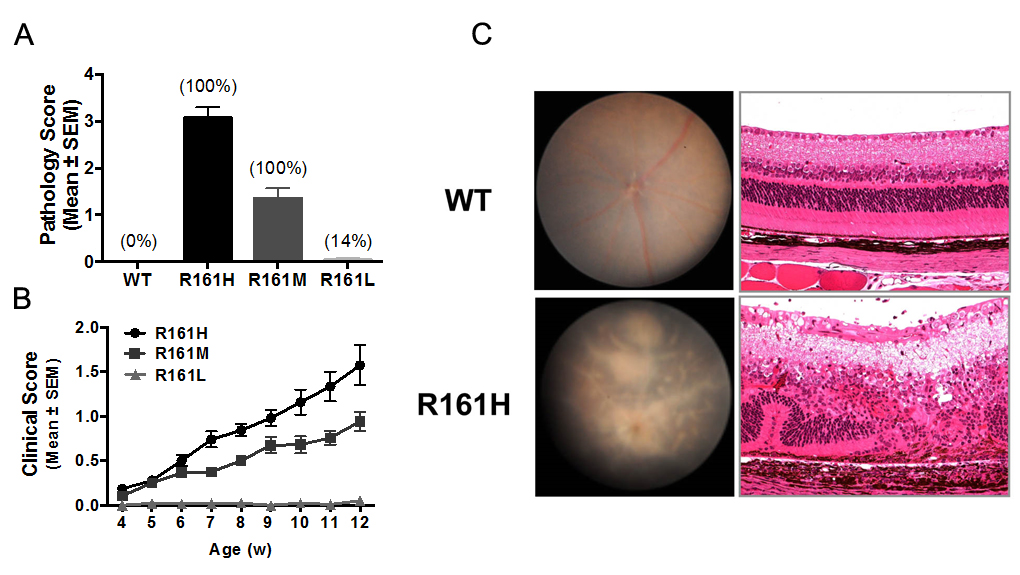 Spontaneous uveitis in genetically engineered mice expressing a receptor for the retinal protein IRBP.
A. Clinical disease scores evaluated by examination under the binocular microscope after dilating the pupil. WT= wild type (i.e., genetically unmanipulated mice with a normal immune system) B. Pathology scores between ages of 8 and 16 wks, evaluated by microscopic examination of histological sections. Incidence of each strain is shown in the parenthesis. C. Uveitis developed by the highly susceptible R161H line by clinical examination (left) vs. histological examination (right). Compare to normal eye in WT mice (disease score =0). (Adapted from the original publication by Horai et al. in CMM 2015).

We generated 3 lines of mice, each established from a single genetically engineered founder mouse, which have different proportions of the retina-specific cells within their lymphocyte repertoire. These mice also have a different level of susceptibility to uveitis, ranging from all mice developing the disease by 2 months of age in line R161H, to little or no spontaneous disease development in line R161L (see Figure). These lines of mice can thus serve as a platform to study natural triggers that can combine with genetic susceptibility to result in development of disease. It is of course important to keep in mind that having an excess of lymphocytes that recognize a single protein is also not exactly “normal”, however, such amplification of the model system is necessary for obtaining a sufficient number of individuals with disease in order to be able to study it in the laboratory. That said, we believe that susceptibility to autoimmune uveitis in humans is also influenced by the number of self-reactive lymphocytes that an individual harbors in their body.

The R161H line of mice, which has the highest frequency of retina-specific lymphocytes, also can serve as a donor of these cells for a variety of studies. To give just a few examples, we often wish to stimulate the retina specific lymphocytes in various ways, and analyze the genes that become activated and their products. We can also infuse the stimulated cells into genetically compatible wild type mice that have a normal immune system, as a readout for study of processes that trigger the ability to induce disease in the recipients. Recipients can be given various therapeutic agents. The retina-specific donor lymphocytes can subsequently be retrieved from the recipients (they can be identified by immunological methods) and effects of the treatment on their physiological and genetic state can be analyzed in correlation with the effects on disease of the treatments under study.

In conclusion, the spontaneous mouse models of uveitis described above are a powerful tool to study natural triggers and basic mechanisms of uveitis, as well as the effects of therapeutic manipulations. Increased understanding of what triggers and what drives the disease in the animal models, will lead to better understanding of uveitis in humans. This should facilitate development of new and rational therapies based on that understanding, to the benefit of the patients who are afflicted with this sight-threatening disease.