A metal block is composed of extremely large amount of metal atoms, while metal clusters consist of only two to about one hundred atoms. They stand for the transition between individual atoms and the smallest particles which can be conceptually considered as solids. Studies on metal clusters are theoretically important because they are idea models for many concepts and theories related to chemistry and solid fields. In addition, the size dependent properties of metal clusters endow them potential applications in various fields. For example, many active sites of heterogeneous catalysts are in the size range of the cluster concept, and reactions between metal clusters and small molecules provide important information on how these active sites works in the catalytic processes. 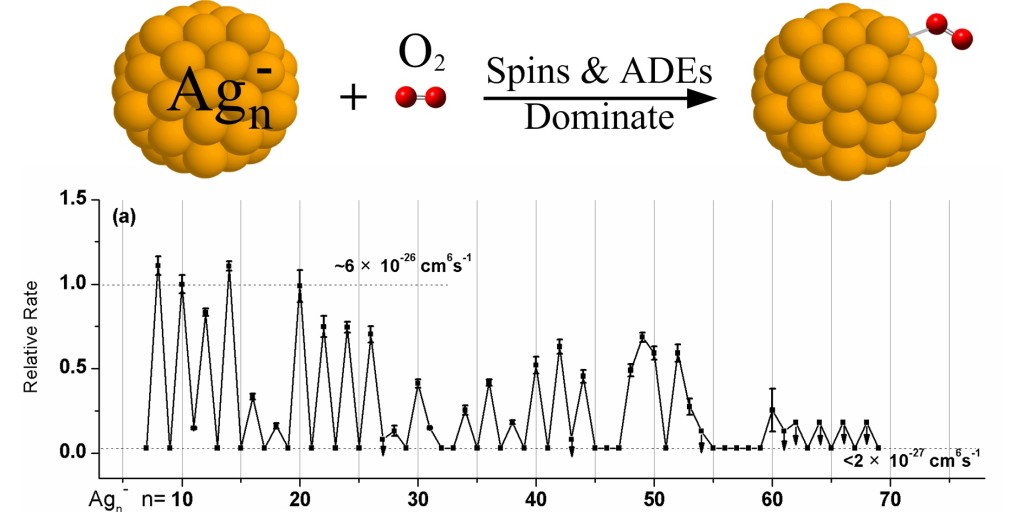 Like that for any molecular or solid species, the fundamental knowledge about metal clusters consists of their geometrical structures, their physical properties, their chemical reactivity and the relations among these three aspects. Though some breakthroughs have been made in directly charactering gas phase metal clusters using the electron diffraction method, more structural information of these species comes from studies on the relations between their geometrical structures and some of their physical properties (such as energy levels). The relations between metal clusters’ chemical reactivity and their geometrical structures or physical properties are generally more complicated. We can image that the small clusters containing several atoms could still perform like a molecule, for which their reactivity is determined by the global structures and global electronic properties. However, there have been few conclusions about what metal clusters up to nano sizes would be like? Do they also perform like a molecule or they should be considered as a solid particle, in which various local reaction sites play the dominant role?

We studied the interaction of O2 with silver clusters up to 1 nm using a flow reactor running at low temperatures. We observed the apparent even-odd oscillation of clusters’ kinetic rates, which is attributed to the variation of clusters’ global spins, and some inert cluster sizes which were previously shown to have high electron detachment energies (ADEs). There are no hints for reaction specialties for the sizes around special geometrical structures. These observation indicate that the global electronic properties dominate the reaction of silver clusters with O2 and this domination extend up to nano size range. This conclusion provides important guidance for designing new silver-based catalysts used in oxidation processes, i.e., the main efforts should be made to tune clusters’ global electronic properties rather than to prepare certain geometrical structures for local interaction sites.