Glucose – a bitter sweet for the brain

During ischemic stroke, insufficient supply of oxygen and glucose leads to severe damage of cerebral tissue. Since the most important energy substrate for the brain is glucose, high blood sugar levels could be a strategy to enhance the availability of glucose to treat stroke. However, it has been shown that hyperglycemia, a common clinical feature in patients with ischemic stroke, is highly associated with an enhanced mortality rate and poor clinical outcome. Diabetes mellitus is a known risk factor for stroke and explains partially why half of all stroke patients are diagnosed with hyperglycemia. Additionally, there is clinical evidence to suggest that stress induces hyperglycemia in non-diabetic stroke patients. Even though the detrimental effects and the high frequency of hyperglycemia in stroke where already discovered in 1976 by Melamed and colleagues, the mechanistic basis of the brain damage still remains unclear. 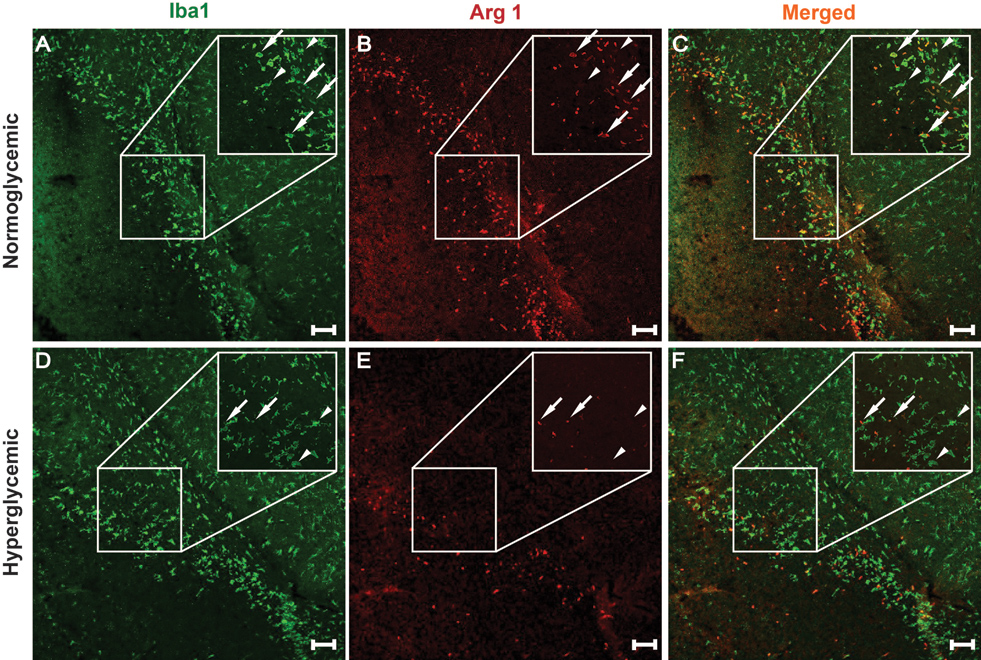 Fig. 1. Monocytes/macrophages in the brain are highlighted using antibodies against the general marker Iba1 (green), while only M2 macrophages are additionally stained for Arg 1 (red). Hyperglycemic conditions during experimental stroke interfered with the noninflammatory polarization of macrophages at the infarcted area, indicated by the reduction in the number of Arg 1 expressing M2 macrophages.

Besides classical metabolites of glucose, which are produced to generate energy substrates like ATP (adenosine triose phosphate) or contribute to the anabolism of the cell, glucose degradation additionally produces unwanted byproducts, such as α-dicarbonyls. These molecules share a common, highly reactive chemical structure that leads to the modification of proteins, DNA and lipids, thereby impeding with the function of various macromolecules. The products of the reaction with amino acids on proteins are referred to as advanced glycation endproducts (AGEs), which are detected by a specialized AGE receptor (AGER), thereby inducing a signaling cascade that drives inflammation. It has previously been shown that an increased AGE concentration in diabetes mellitus is responsible for several detrimental changes in the reaction of the immune system to injuries.

The regulation of the inflammatory response can happen at different levels and cell types and is not restricted to the adaptive immune system. Monocytes/macrophages which belong to the innate immune system have a remarkable plasticity that enables the expression of genes in a spectrum that is characterized by two extremes; proinflammatory M1 or noninflammatory M2 macrophages. Following stroke, M2 macrophages have shown a protective role by removing cell debris, expressing factors which promote wound healing and dampening the inflammatory state of other immune cells. 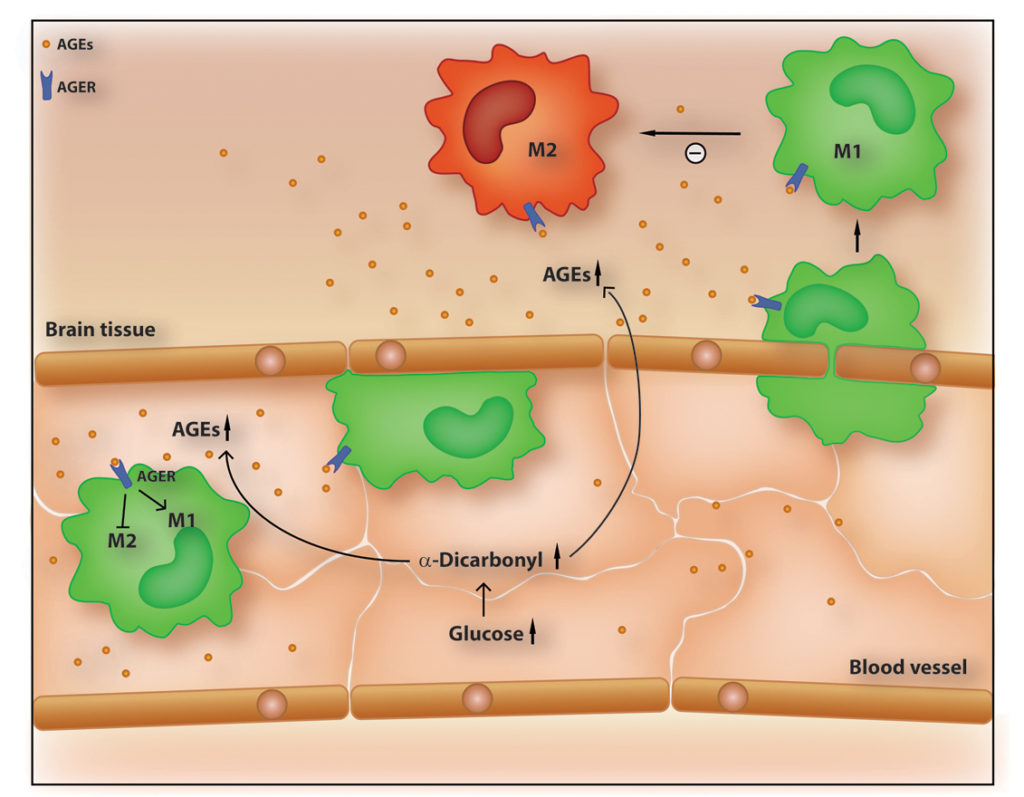 Fig. 2. In cerebral ischemia, inflammatory M1 macrophages (green) infiltrate the brain and polarize in the parenchyma to a protective M2 phenotype (red). In case of hyperglycemia during stroke, the increased production of α-dicarbonyls leads to an elevation in AGEs, which are detected by the receptor AGER. As a consequence, the polarization towards the noninflammatory M2 phenotype is impaired.

In mice, an elevated glucose concentration in blood during experimental stroke resulted in an increased infarct volume, in accordance to clinical data in hyperglycemic patients. Further analysis of the infarcted tissue using markers for the different states of macrophage polarization revealed a reduction of protective M2 macrophages by hyperglycemic conditions (Fig. 1). When this experiment was performed in mice lacking the receptor for AGEs, the infarct volume remained unchanged by glucose treatment and no reduction of M2 macrophages could be detected. Additionally, purified macrophages missing the AGE receptor showed an increased expression of M2 related genes in general. Furthermore, measurements of α-dicarbonyls after experimental stroke revealed an enhanced concentration of these AGE precursor molecules in plasma and brain tissue of mice with acute hyperglycemia. Hence, the formation of AGEs and thereby the altered differentiation of macrophages is an important factor for the worsened outcome after hyperglycemic stroke. By interfering with the polarization toward a protective M2 cell type, hyperglycemia may also obstruct endogenous protective mechanisms outside the central nervous system. Noninflammatory M2 macrophages are involved in tissue repair after myocardial infarction, kidney injury, or limiting early stages of atherosclerosis. On this background, it is even more important to know how hyperglycemia, glucose metabolism and AGE production affect polarization of macrophages in order to develop an effective therapeutic strategy.