Acute myeloid leukemia (AML) is the most common and aggressive blood cancer in adults and is associated with a high rate of mortality due to cancer therapy resistance and disease relapse. AML is characterized by severe deficiency of functional blood cells that are responsible for vital processes such as oxygen delivery, wound healing and immune competency. In healthy individuals 108-109 blood cells are produced daily in the bone marrow from blood stem cells or hematopoietic stem cells (HSCs) in the process termed hematopoiesis. Over the past several decades very little progress has been made towards eradicating AML and the old notion that only the DNA mutations within HSCs result in their inability to produce functional blood cells had to be revisited. It was proposed that hematopoiesis is greatly affected by the bone marrow microenvironment in which HSCs reside, more precisely the function of cells that support and interact with HSCs. Thus, the hypothesis posed was that functional aberrations in cells making up the bone marrow microenvironment lead to perturbed hematopoiesis and development and progression of AML. 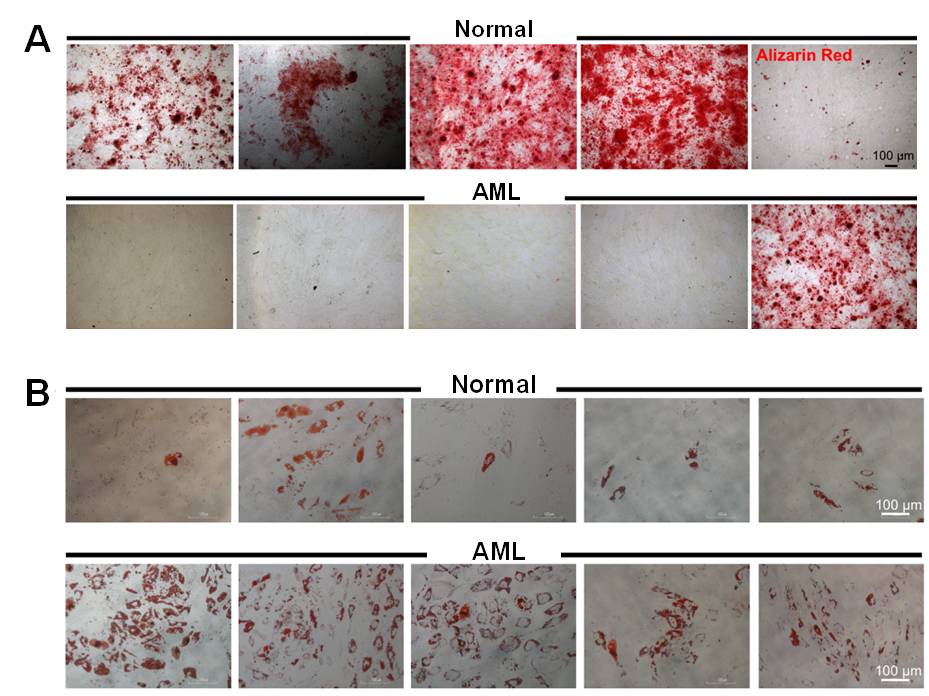 In order to address this hypothesis, we undertook a study of one subset of cells constituting bone marrow microenvironment – mesenchymal stem or stromal cells (MSCs) and compared functional properties of MSCs derived from healthy donors and patients with AML. MSCs are stem cells that give rise to osteocytes (bone cells), adipocytes (fat cells) and chondrocytes (cartilage cells) through the process of differentiation. In the bone marrow these cells guide production of bone, fat and support vasculature.   The key functional features of MSCs with respect to hematopoiesis are their capacity to produce fat vs. bone and to support healthy HSCs by releasing soluble proteins. Our study has demonstrated that mesenchymal stromal cells derived from patients with AML have a delayed capacity to form bone (osteogenesis) and a largely increased capacity to form fat (adipogenesis), potentially contributing to “fatty bone marrow” that is often observed in patients with AML. Thus, mesenchymal cell function is skewed toward producing more adipocytes vs. osteocytes, Figure 1. We went on further to answer the question of how does “fat-biased” vs. “bone-biased” microenvironment may contribute to abnormal hematopoiesis. To address this question we compared the effects of “fat-biased” vs. “bone-biased” MSCs on HSC support and maintenance. The experiments have demonstrated that “fat-biased” MSCs released increased amounts of proteins promoting expansion of HSCs and creating an environment that is supportive of cell proliferation, commonly observed in leukemia. HSCs that were cultured together with “fat-biased” MSCs had increased proliferative capacity but decreased in vitro stem cell function. The fast division of HSCs coupled with decreased stem cell capacity would eventually lead to stem cell exhaustion – depletion of the stem cell pool that is available for healthy blood cell generation.

Taken together, our studies indicated that, indeed, in AML patients cells making up the bone marrow microenvironment are functionally perturbed exhibiting increased capacity to differentiate into adipocytes vs. osteocytes. This “fat-biased” microenvironement in turn is supportive of cell proliferation, important in cancer progression, and depletes the healthy HSC pool resulting in conditions that are unsupportive of normal hematopoiesis.