Neural transplantation has continued to show promise as an effective treatment option for neurovascular, traumatic and neurodegenerative disorders. Previous work in neural stem-cell transplantation has demonstrated the ability of distinct neural cells to repair damage and to restore function; however, several practical issues hinder the full clinical potential of this approach. These include precision targeting, dissemination of cells within a specific brain structure, and minimizing localized trauma. 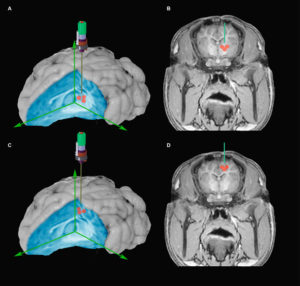 Fig. 1. Schematic reconstruction of the injections in a pig brain using the IMI.
Schematic depiction of IMI injections into the pig brain, illustrating spatial arrangement of stereotaxic IMI injections into the basal ganglia (A) and in the frontal cortex (C). The corresponding post-operative T1-weighted-MRI images are depicted in B & D.
ROI’s are represented as red disks. Note that the cellular deposits delivered with the standard straight canulla were targeted to the same ROIs but required separate penetrations for injections that did not lie along any given trajectory.

Two groups of healthy female Göttingen minipigs received injections of the human stem cell line, NSI-566, into the right hemisphere and cell suspension carrier media into the left hemisphere. Human surgery was simulated with protocols and apparatus commonly used for neurosurgical patients. The first group received all injections using a straight, 21-gauge stainless steel cannula. The second group received all injections using the Intracerebral Microinjection Instrument (IMI), whereby radial distribution of injections was achieved via angular extension of a 196-micron diameter microcannula from a guide cannula using single overlying brain penetration. Each animal received six 20 µL intracerebral injections within each hemisphere: three in a radial distribution, covering a 180° arc, within both frontal cortex and basal ganglia. H&E and immunocytochemistry (HuNu and GFAP) were used to identify implanted cells and to assess tissue response.

The presence of surviving cells in appropriate brain regions demonstrated that the IMI is capable of accurately delivering viable human-derived stem cells safely in a 3D array at predetermined sites within the pig brain. In addition, qualitative evaluation of the target tissue suggests efficient delivery with decreased surgical trauma.

The IMI was evaluated for function and safety in its ability to reliably deliver a human-derived stem cell line that is currently being tested in clinical trials for neurological diseases.

The reduction in size of the delivery cannula in the present design corresponded to qualitatively less trauma and bleeding along the microcannula track, attenuated reactive gliosis, reduced tracking of suspension back along the cannula and a less congested cellular deposit. It is speculated that more diffuse distribution of therapeutic cells within the host parenchyma at the site of injection may allow improved survival and may promote migration, as well as allow optimized integration of the transplanted cells within the host neuroarchitecture.

Compare the use of the Intracerebral Microinjection Instrument (IMI) to a conventional straight cannula.

In contrast to traditional straight cannulas, the IMI enables the delivery of multiple precise cellular injection volumes in accurate 3D arrays. Therapeutic stem cells, as well as other restorative therapeutics, continue to show promise for repairing the damaged or diseased CNS as well as modulating neural function. Precise and reliable delivery of these therapeutics within substructures of the brain is essential to optimize efficacy. Furthermore, the ability to accurately distribute agents in three-dimensional space while incurring minimal trauma can further enhance their clinical effect while minimizing morbidity.

Here we report use of the Intracerebral Microinjection Instrument to deliver human-derived stem cells in a porcine model of human neurosurgery. This study demonstrated that viable human stem cells can be accurately placed with the IMI at predetermined brain targets in a radial array with decreased risk of trauma and haemorrhage and reduced reactive gliosis in the graft vicinity. Moreover, using the IMI for precision 3D delivery reduces surgical time by up to 50%. The IMI therefore represents a dramatically improved delivery method for restorative therapeutics.