The effects of H+ and OH− on liquid H2O have attracted much attention by spectroscopic and computer simulation studies. In this work, we offer an alternative approach; from a differential solution thermodynamic. Namely, we use higher order derivative quantity of G with respect to independent variables (p, T, ni) or a combination thereof, where ni is the molar amount of the i-th component. We believe that the higher order derivative quantity contains finer and more detailed information than the original G. In Figure 1 we show the mole fraction (xi = ni/∑ni) dependence pattern of a 3rd derivative quantity, , we call i-i enthalpic interaction function. 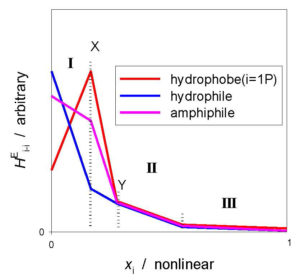 Fig. 1. A clearer definition among hydrophobes, amphiphiles and hydrophiles. 1P is one of hydrophobes.

Until we discovered the results shown in Figure 1, the definition of hydrophobic/amphiphilic/hydrophilic solutes remained primitive. Amphiphiles have hydrophobic and hydrophilic moieties within the same molecules. Figure 1 shows that their effects on  work additively by hydrophobic and hydrophilic moieties. This finding and others led us to what we call the 1-propanol (1P) probing methodology. We first dissolve a test sample, S, whose characterization of its effect on H2O is to be sought to its mole fraction , more dilute than point X in Figure 1. We let S works on H2O. We then characterize the situation of the resulting aqueous solution by determining  by using 1P as a probe.  1P is a typical hydrophobe and the  pattern takes a peak type anomaly as shown in Figure 1. Since S has already modified the bulk H2O somewhat the  pattern will be modified a little. If S is a hydrophobe the peak top shifts to the west (to a smaller value of x1P). While a hydrophilic S moves the peak top to the south. An amphiphile, on the other hand, shifts the peak top to the south-west direction, the westward component of which is its hydrophobic contribution and the southward one its hydrophilic component. All these movements are linear to. Their slopes we define as hydrophobicity and hydrophilicity indices respectively. 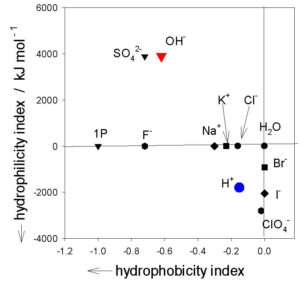 Fig. 2. Hydrophobicity and hydrophilicity indices map for H+ and OH− together with other ions. H2O defines the origin and the probing 1P should be plotted at (-1, 0).

We applied this methodology to S = NaCl salt.  Since  is small ( < 0.035), NaCl dissociates completely to Na+ and Cl− in aqueous solution. The results suggest that both Na+ and Cl− ions form hydration shells around Na+ with 5.2 H2O molecules and 2.3 for Cl−. More importantly, however, they do not perturb bulk H2O away from hydration shells at all. This finding opens a new route to characterize in terms of hydrophobicity and hydrophilicity indices. For a given test ion S+ and S− we use Cl− and Na+ as the counter ions respectively and treat a neutral salt. From the results, the pertinent indices for Cl− and Na+ can be subtracted. Thus, we applied the methodology to characterize the effects of H+ and OH− on H2O. The results are mapped in Figure 2 together with other normal ions. It turned out that H+ is an amphiphile and its equilibrium structure takes the Zundel type H+(H2O)2. OH−, on the other hand, acts like a hydrophobe-like hydration center which is hydrated by about 12 H2O molecules, but the bulk H2O away from hydration shells remain unperturbed at the outset. However, as the probing 1P increases and as the available H2O decreases, OH− exerts such an effect beyond the hydration shells that the hydrogen bond probability of bulk H2O away from hydration shells is reduced gradually just as hydrophobes do to H2O.