Since the introduction of prostate-specific antigen (PSA) as a blood test in 1992, the number of men diagnosed with prostate cancer increased dramatically. Because PSA detects men who are asymptomatic two things occurred. First, many of the men over 70 years of age would have lived out their lives without any benefit from the diagnosis. However, on the opposite side, the reduction of deaths from prostate cancer was reduced by at least 50%. Regrettably, in May 2012, the United States Preventive Services Task Force issued a grade D recommendation which meant do not perform PSA blood testing for prostate cancer screening. In their defense, the Task Force argued that the effects of treatment outweighed the benefit of screening. 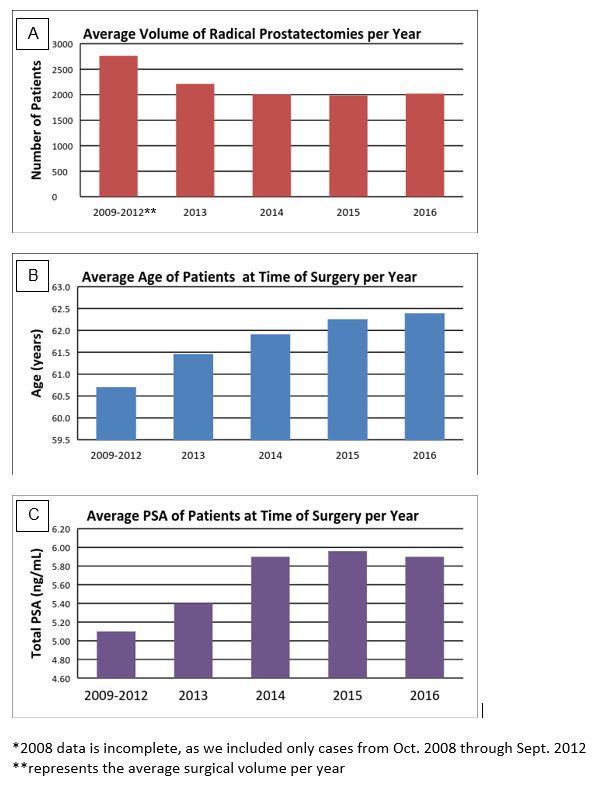 We noticed that the Task Force recommendation had a significant impact on my practice as we saw a 20-25% drop in referrals beginning about 4 months post-recommendation. In addition to the practice reduction, we saw that patients were older and had higher PSA levels which were resulting in more advanced disease at the time of robotic radical prostatectomy. 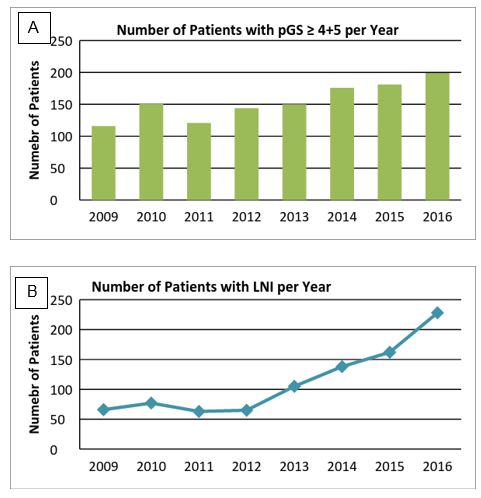 Fig. 2. Unintended consequences of the USPSTF grade-D recommendation against PSA-based screening: (a) pGS≥4+5 over 8 years and (b) LNI over 8 years.

Since population-based datasets take 10-20 years to mature, we reached out to 8 additional high-volume surgeons throughout the United States, collating over 19,000 patients pre- (October 2008 – September 2012) and post- USPSTF (October 2012 – September 2016) screening eras to see if this was just a hiccup or a nationwide experience. Instead of waiting 10-20 years, we utilized known metrics seen at the time of surgery that were highly predictive of disease aggressiveness: pathologic Gleason grade, lymph node metastases, seminal vesicle invasion, etc.

Compared to the four-year average pre- (Oct. 2008-Sept. 2012) versus post-recommendation (Oct. 2012-Sept. 2016), there was a 22.6% reduction in surgical volume, an increase in median PSA (from 5.1 to 5.8 ng/ml), and an increase in mean age (from 60.8 to 62.0 years). Most worrisome, in absolute numbers, was a near-doubling of high grade Gleason 9-10 cancers, a 3.5 fold increase in men with advanced seminal vesicle involvement, a tripling of lymph node metastases and the one year biochemical recurrence post-radical prostatectomy rose from 6.2% to 17.5%.

Overall, the most deleterious outcome of reduced screening is the increased risk of increasingly more aggressive disease over time.  While changes in age and low-grade disease are congruent with the Task Force recommendation, the presently noted increase in men with PSA>10 ng/ml is potentially a harbinger of further increasing risk of these issues. But the 3.4-fold increase in the fourth-year following the recommendation in the number of patients with metastatic lymph node metastasis will definitely impact PC specific mortality. Also, the nearly threefold rise in absolute numbers of BCR within 12 months of surgery will no doubt lead to further unintended consequences associated with secondary interventions with their attendant side effects and costs.