Heat shock protein as a novel druggable target in angiogenesis?

Angiogenesis is a physiological process that involves formation of new blood vessels from pre-existing vessels for efficiently providing oxygen and nutrients during growth and development, as well as during wound healing. Under pathological conditions, angiogenesis is regulated by complicated coordinated actions of upregulated ligands and receptors. Angiogenesis is not only essential for tumor progression and metastasis, but also for a variety of angiogenesis-related diseases, including wet age-related macular degeneration, glaucoma, and diabetic retinopathy. Over several decades, vascular endothelial growth factor (VEGF) has been regarded as a key player in angiogenesis. To date, therapeutics targeting VEGF have been found to be clinically useful for the suppression of pathological angiogenesis; however, accumulating evidences suggest that despite their wide range of usage, VEGF inhibitors such as bevacizumab (Avastin; Genentech, San Francisco, CA, USA) and ranibizumab (Lucentis; Genentech) also lead to drug resistance that is current limitation of anti-VEGF therapy in clinics. To this ends, the medical research for identifying novel angiogenic factors remains a challenge for the scientific community. 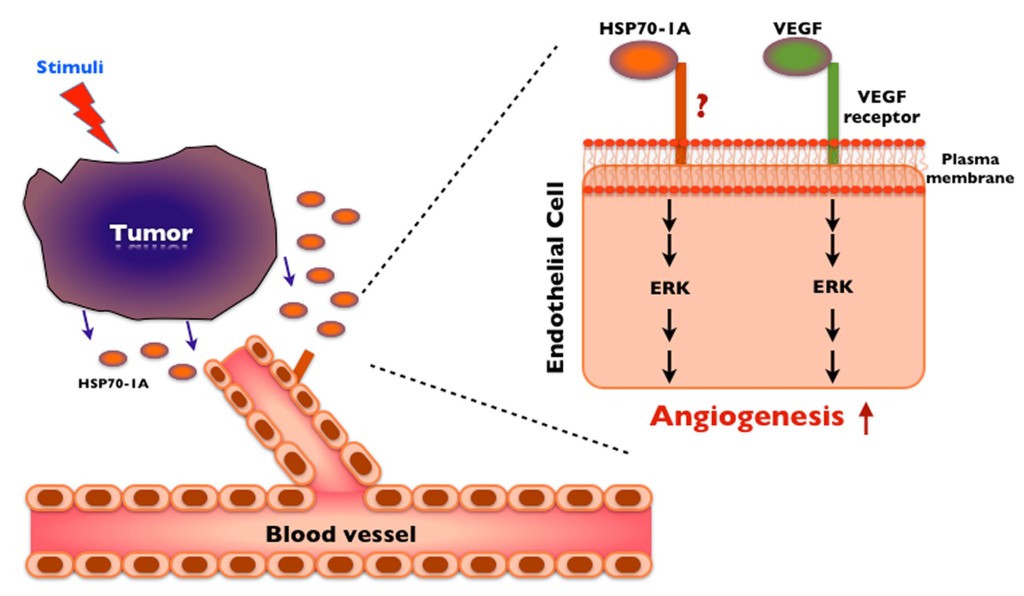 Fig. 1. Hypothetical illustration of secretory HSP70-1A-induced tumor angiogenesis. In tumor progression and metastasis, HSP70-1A may be upregulated and secreted in accord with the spatiotemporal requirement of cells. Then, excessive secretory HSP70-1A tightly binds to the membrane surface of endothelial cells, activates ERK, and regulates pathological angiogenesis.

Heat shock protein 70-1A (HSP70-1A) is a stress-inducible protein that is expressed only at low or undetectable levels in most unstressed normal cells and tissues, but its expression is rapidly induced by a variety of stresses. Traditionally, HSP70-1A acts as a central component of the cellular network of molecular chaperones and folding catalysts inside cells. Although several reports have suggested that HSP70-1A is highly expressed and secreted and plays a role in diseases, including cancers, the functional relevance and mechanism of HSP70-1A in angiogenesis have not been defined yet.