In the present era, pollution of water, soil and air with heavy metals is increasing rapidly. Industrialization and technological advancement have caused serious damage to the ecosystem by releasing large quantities of heavy metals (i.e., cadmium, chromium, and lead) and metalloids (i.e., arsenic and antimony). These metals are a major threat to all life forms in the environment due to their toxic effects. In addition, the heavy metals are not chemically and biologically degradable and are not simply removed from the environment. They can only be transformed into less toxic species. Unlike many other pollutants (i.e., organic contaminants), toxic effects of heavy metals last longer. Most of the metals are toxic at low concentrations. Speciation of heavy metals and their bioavailability determine the physiological and toxic effects of metals on living organisms. These metals are transferred to food chain by the plants grown on the heavy metal-contaminated soils, which are main site of accumulation of these metals. 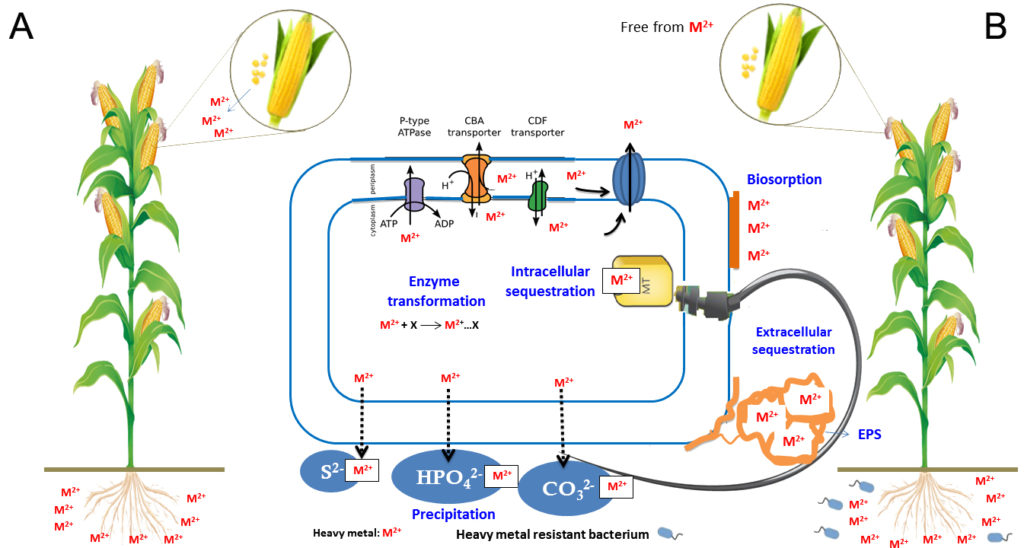 Remediation using conventional physical and chemical methods is not cost effective and produces large volumes of chemical wastes. In addition, use of these methods is ineffective for low metal concentrations (less than 100 mg/L) and is not specific for metal-binding properties. Therefore, there is a need to find an eco-friendly and efficient method of reclaiming environments contaminated with heavy metals. Using beneficial microorganisms, including bacteria, are known to be an efficient alternative to physical and chemical techniques for the remediation of heavy metal contaminated environments. The majority of heavy metals disrupt microbial cell membranes, but the bacteria isolated from heavy metal-contaminated soils or from plants grown on heavy metal-polluted soils are resistant to heavy metals and have adapted to these metals through a variety of chromosomal, transposon, and plasmid-mediated resistance systems. Heavy metal-resistant bacteria have various mechanisms of metal sequestration that hold greater metal biosorption capacities. Due to their resilience to an extensive range of environmental conditions, resistance to various heavy metals, ubiquity, size, and ability to grow under controlled conditions, the bacteria have been used as biosorbents. The cellular structure of the bacteria can trap heavy metal ions and subsequently sorb them onto the binding sites of the cell wall. Since the bacteria have high surface-to-volume ratios and numerous potential active chemosorption sites like the teichoic acid on the cell wall, they show an excellent sorption capacity. Owing to these abilities, the bacteria have been effectively used as biosorbents for removal and recovery of heavy metals.

The conversion of bioavailable heavy metals into inert species is a crucial step for reducing the uptake of heavy metals by plants. Plant associated-bacteria protect the plant from the phytotoxicity of excessive metals by changing the speciation from bioavailable forms to the non-bioavailable forms in soils. The low bioavailability of metals in soils decreases their uptake by plants. These bacteria can also reduce plant metal uptake or translocation to aerial plant parts by decreasing metal bioavailability in soil by processes of bioaccumulation, biosorption, precipitation, biotransformation (via methylation, demethylation, volatilization, complex formation, oxidation, or reduction), complexation, and alkalization (Fig. 1). In addition to  reducing the accumulation of these metals in plant tissues, these bacteria can help plants tolerate heavy metal toxicity stress by different mechanisms such as production of phytohormones such as indole-3-acetic acid (IAA), 1-aminocyclopropane-1-carboxylic acid (ACC) deaminase, siderophores, organic acids, exopolymers, and antioxidant enzymes, phosphate solubilization, induction of heavy metal resistance genes, and improvement of the uptake of essential plant nutrient elements.