Females in the animal kingdom are often known to be the choosier sex when it comes to finding the right mating partner. Consequently, differences in female preference for certain male characteristics can be a driving force for population divergence and speciation. This can happen, for example, if females prefer certain traits in a male and males with these attributes therefore have an advantage over other males. Over time the males in that population will change more and more to accommodate the females.  Males of the red mason bee, Osmia bicornis, show an elaborate courtship behavior during which they try to impress the females. The male vibrates his thorax (by contracting his wing muscles while the wings are “unhinged” so he does not fly off), rubs himself against the female, while passing his antennae repeatedly over those of the female and his forelegs over the female’s compound eyes. He then tries to copulate and females choose suitable males based on, among other criteria, their thoracic vibrations. These vibrations are thought to be a signal of a male’s fitness since females choose the strongest males that can vibrate for the longest time. The precise role of such vibrational signals, however, has not been proven by bioassays (tests in which the vibrations are manipulated) since changing a life male’s vibrations was so far impossible without very invasive procedures. The vibrations are quite complex and might also play a role in species recognition, as is the case in other insects. 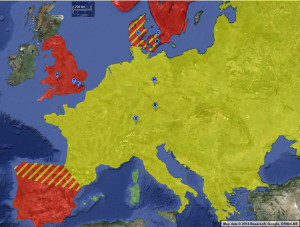 Fig. 1. Map of the two main subspecies of O. bicornis (red=O. bicornis rufa, yellow=O. bicornis cornigera) in Europe suggested by Peters (1987). The location of the populations used for our analyses are marked in England (Kent, Hereford and Tonebridge), Germany (Halle, Regensburg and Constance) and Denmark (Copenhagen, Vejle and Møn).

There are two main subspecies of O. bicornis in Europe, distinguishable only by a single trait – the color on the tip of their abdomen (Fig. 1). To investigate if the vibrations indeed play a role in species recognition we developed a new bioassay allowing us to impose the vibrations of one live male onto another. This was done in order to discern possible selective mate choice by females from O. bicornis originating from different regions of Europe. We accomplished this by putting a small magnet on the males’ thorax and then placing the mating pair on an inductor during their courtship. The inductor was connected to a frequency generator emitting a pre-recorded male signal. Through the electromagnetic field, the signal was transferred to the magnet and the male vibrated in the desired frequency (Fig. 2). After imposing another signal, most males stopped emitting their own vibrations, or their innate signals were overpowered by the magnet’s vibrations. All the males otherwise continued their usual mating behavior and attempted to copulate. 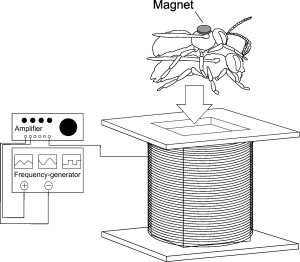 Fig. 2. Set-up of our bioassay. The pre-copulatory pair was put on the iron core within the inductor and the signal of a successful male, produced by a frequency-generator and then amplified, was then transmitted onto the magnet via the electromagnetic field.

We could therefore show that vibrational signals encode not only fitness, but also information about the region of origin indicating that divergence already exists between the different European O. bicornis populations. This might ultimately lead to the development of a new species when no cross-mating is possible any more at all. Our results provide exciting new insights into the scope of vibrational communication in bees, a group previously considered to rely predominantly on chemical signals. Our newly developed method should shed further light on many exciting questions concerning vibrational communication in bees and other animal taxa.