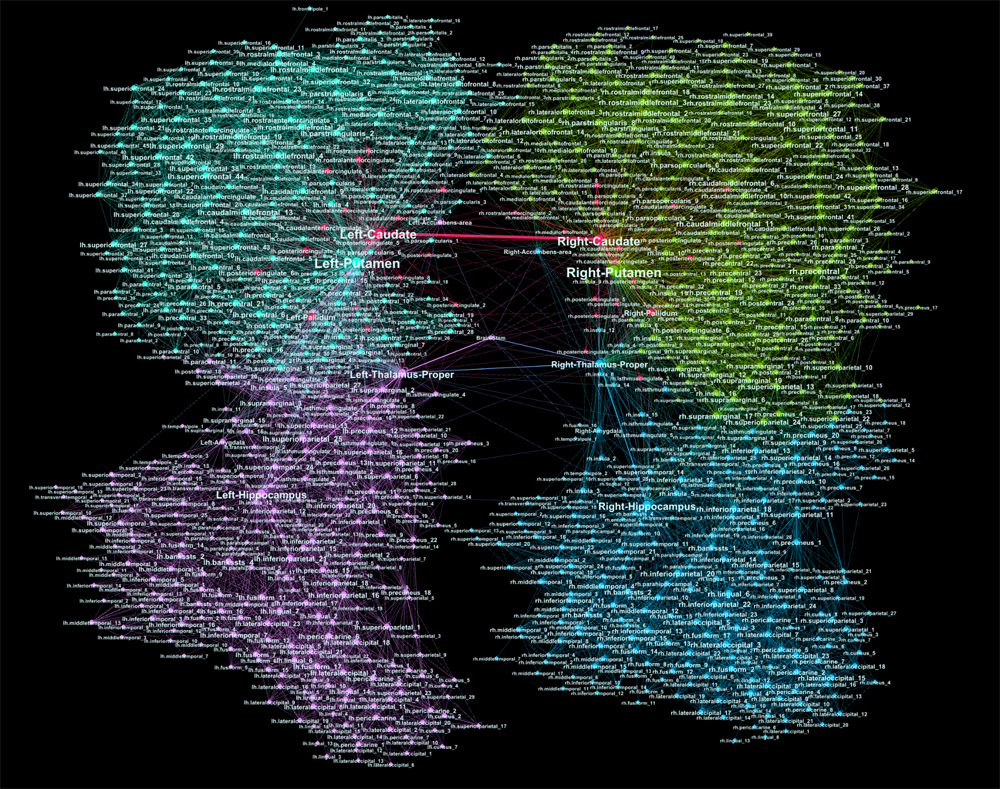 Mathematical modelling of the brain involves a range of algorithms that help interpret the imaging data. Diffusion tensor imaging data have been readily mapped onto the structural brain network (connectome). The network nodes are anatomical grey-matter regions interconnected via white-matter fibre bundles, cf. Figure 1. In recent years, network mapping opened up a new research avenue of brain structure-function interdependences, using advanced graph theory and algebraic topology methods. Our study extends the standard network’s theory beyond pairwise connections to determine patterns of higher-order structures. They are geometrically described as triangles, tetrahedrons and higher cliques involving different brain regions. At a larger scale, these simplicial complexes are arranged into five functionally different brain segments, corresponding to the network’s communities, as shown in Figure 1. Deciphering how these geometrical descriptors of all sizes are mutually interconnected reveals the entire hierarchical organisation of human connectomes.

Knowing the complete architecture of the human connectome helps elucidate some fundamental features of the brain’s functional geometry. Specifically, the graph is 3/2-hyperbolic with short paths, enabling efficient transmissions of information between distant brain areas. The topology hubs (nodes with the most significant connectivity and weights of edges, and the number of simplexes of all orders attached to them) appear to be eight central brain regions (Putamen, Caudate, Hippocampus and Thalamus-Proper in the left and right cerebral hemispheres), making a “rich-club structure”. The identified core network around these hubs represents the part of the human connectome through which the hubs connect distinct parts of the brain via simplexes of different sizes. Moreover, beyond the mere number of edges, the structure of simplicial complexes of female and male connectomes unveils the essential sex-related differences. Notably, the female consensus connectome appears better connected in all topology measures than the corresponding male connectome. Potentially, the structural differences between the connectomes in specific neurological disorders (vs. healthy individuals) can be identified using these topological measures. Finally, the precise architecture of simplicial complexes in the human connectome provides a basis for realistic modelling towards the emergent brain dynamics with the higher-order interactions embedded in the underlying geometry.