Zinc Oxide (ZnO) is one of the most exploitable nanoparticles (NPs) in industrial and consumer products especially in cosmetics, food additives, pharmaceuticals, biosensors, photo electricity and rubber industry etc. Regarding their wide variety of applications, they constantly come into contact with human body parts. As with the elevating exposure incidence, safety concerns about the same is also getting improved day by day. Being the primary organ involved in the purification of blood, kidney plays a crucial role in the elimination of harmful NPs entering the body. Even though there exist a milieu of biodistribution studies confirming the presence of ZnO NPs in human kidney, precise evidences for their potential toxic effects is still lacking. Therefore it is very crucial to analyse the effect of ZnO NPs upon exposure to human embryonic kidney 293 (HEK 293) cells. HEK is considered as a widely accepted kidney toxicity model. 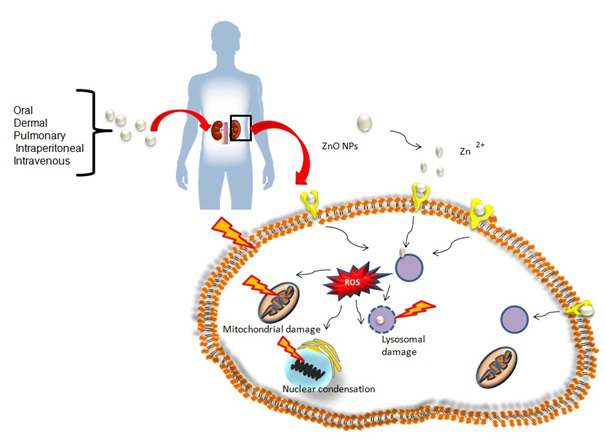 A batch of assays was carried out to elucidate the mechanism behind cytotoxicity. The characterization of ZnO NPs was done by transmission electron microscopy (TEM) and the average size was found to be in the range of 25-40 nm in diameter. Cell viability studies were carried out using MTT and neutral red uptake assays after 3, 24 and 48 hours of exposure of HEK cells with ZnO NPs. The results evidently showed that ZnO NPs induced dose and time dependent toxicity; wherein the toxicity was induced within 3 hours of exposure and the intensity was more pronounced after 24 h exposure. Cellular morphology was analyzed by Giemsa staining and obvious changes were obtained at 75μg/ml concentration after 24 h.

Studies claim that, high solubility of ZnO NPs in extracellular region directly causes intracellular increase of Zn2+ which will alter the activity of Zn dependent enzymes and transcription factors. Presence of large concentration of Zn2+ ions causes the lysosomal destabilization as well. Cellular interaction of ZnO NPs causes ROS generation; which ultimately impairs mitochondrial as well as lysosomal activities and hence leads to autophagy-type 2 programmed cell death. Cytoskeletal collapse resulting by nano ZnO also triggers ROS dependent apoptosis. Chromatin condensation resulting from nuclear interaction of nanoparticles is also considered as a sign of cellular apoptosis. In conclusion, preventive measure should be taken during usage of such potential nanomaterials so that the detrimental toxic effect can be avoided.