Classical autism which is termed as an autistic disorder belongs to the autism spectrum disorders (ASD). Autism was first coined in 1943 by Dr. Kanner. Individuals with ASD may be diagnosed as early as three years of age and present with developmental delays, communication problems (both verbal and non-verbal) along with social interaction difficulties and restricted repetitive behaviors. Autism affects between 0.5 to 1% of children in the U.S. with a 4:1 male to female ratio, usually without reported birth defects or growth failure. Loss of skills is noted in about 30% of cases with intellectual disabilities noted in about 60% of cases. The ASD prevalence ranks higher than other conditions such as epilepsy, dementia or Parkinson disease. Macrocephaly is also seen in about 10% of cases but children with autism have macrocephaly in 20% of cases and those individuals with extreme macrocephaly are at risk for single gene defects such as the PTEN tumor suppressor gene. 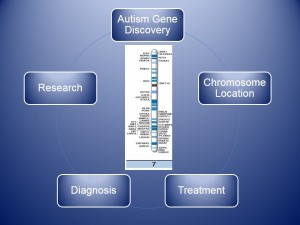 The vast majority of individuals with autism will have genetic causes. These genetic changes may be due to deletions and duplications of gene(s) or mutations/variants found in single genes. Advances in genetic/genomic technology have allowed for the discovery of clinically relevant or known susceptibility genes for autism. We searched key words from published reports and genomic-based websites and identified 792 genes. Gene symbols were then placed on human chromosome ideograms to produce a convenient pictorial genetic image useful for genetic counseling.

A wide range of genetic abnormalities are known as well as non-genetic causes including environment, environmental and gene interaction with epigenetics and metabolic disturbances such as mitochondrial problems seen in 20% of ASD cases. The recurrence risk for other affected individuals is dependent on the family history and presence or absence of congenital anomalies. Clinically relevant and recognized known genes for ASD are identified by different methodologies, including cytogenetics with noted translocations or deletions (e.g., 15q11.2 BP1-BP2; 22q11.2) involving specific genes. Individuals with ASD may also have overlapping linkage and functional data related to the clinical features or with certain chromosome regions or cytogenetic markers identified by these studies using polymorphic DNA markers that co-segregate with the specific phenotype. Recent genetic data and an assortment of genes with common disturbed pathways and mechanisms do support genetic factors in the vast majority of individuals having various complex components recognized in ASD or related to psychiatric behavioral disorders.

Advances in genetic/genomic technology using next generation DNA sequencing, genome-wide association and functional gene expression studies and the incorporation of genomic databases have led to peer-reviewed published reports allowing for the generation of a master list of clinically relevant or known susceptibility genes for ASD. We searched key words related to ASD and genetics using several sources including publications, accessible authoritative autism websites such as the Simons Foundation Autism Research Institute (SFARI) and genomic computer databases maintained and dedicated to gene discovery and characterization. The compiled master list included 792 genes that were arranged in alphabetical order in tabular format. Gene symbols were then placed at their location on high-resolution human chromosome ideograms (850 band level) which enable clinical and laboratory geneticists, genetic counselors, and other clinicians to access convenient pictorial genetic images. The distribution pattern and location of contributing ASD genes should inform diagnosis, lead to gene-based treatment plans and provide risk estimates for genetic counseling of family members with affected relatives. Meaningful correlations can also be made using the observed phenotypes seen in affected patients having disturbed suspected/confirmed ASD gene(s) and found in the chromosome region or at chromosome breakpoint or band site locations. The clustering of related genes and gene families can readily be seen by examining the chromosome ideograms and gene(s) locations leading to additional research studies and generating questions related to genes, gene interaction and pathway analysis with the potential of investigating new therapeutic agents and intervention specifically for those affected by autism. The summarized genetic data should inform diagnosis and support genomic based personalized medicine or precision care and accurate genetic counseling for families and their at-risk relatives.