Despite broad utilization of oral P2Y12 platelet inhibitors such as clopidogrel, prasugrel, and ticagrelor, the comparative mortality risks of each agent are unknown. Moreover, few available randomized data are challenged with restricted populations, double – digit drug discontinuations, and incomplete follow-up. Importantly, one agent, ticagrelor, is consistently advertised as providing a mortality benefit based solely upon the controversial PLATO trial. 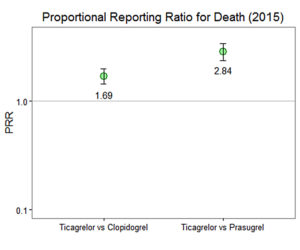 Because such a benefit has never been confirmed by any later ticagrelor trials, alternative data on comparative mortality risks linked to antiplatelet agents are crucial to inform prescribing physicians. We assessed total and 2015 annual deaths rates for clopidogrel, prasugrel, and ticagrelor, from the FDA Adverse Event Reporting System (FAERS). Importantly, these data are public, and reporting death is mandatory (21CFR314.80) for FAERS. From 7,732,656 screened FAERS cases, we excluded 7,607,053 and qualified 125,503 events, including 14,396 deaths. The distribution of deaths reported in entire FAERS, and 2015 annual fatalities for three antiplatelet agents is presented in Table 1.

Data from this large, uniform, United States government-run international repository suggest a consistent disproportional excess of mortality associated with ticagrelor when compared with clopidogrel and especially with prasugrel. Despite the heavily debated FDA decision to approve ticagrelor in 2011, the drug has been expanding by consistently claiming mortality benefit following myocardial infarction in the endless TV advertisements, although the death benefit is lacking in the drug insert. It is concerning that this claim of mortality superiority over clopidogrel by gaining broad cardiovascular indications is based exclusively on the results of a single controversial PLATO trial against clopidogrel. Importantly, these death advantages after ticagrelor were never confirmed thereafter, despite massive implementation of the PARTHENON program.

In fact, the numbers matter. In the PLATO trial, ticagrelor was associated with 89 less vascular deaths and 107 less all-cause deaths than clopidogrel, allegedly representing less than 18% mortality reduction. In FAERS, however, the latest evidence for 2015 alone indicates that the rate of ticagrelor deaths was about 40% higher when compared to clopidogrel, and almost tripled when compared with prasugrel, providing strikingly significant p-values.  For example the difference in signal between total prasugrel and ticagrelor deaths is as much as 2.99e-17. This number means that the p value for significance holds 16 zeros after the comma, and the 17th-19th digits are 299. This is especially concerning, because the latest evidence failed to confirm PLATO “mortality benefit”, since even a favorable trend, was lacking in all post-PLATO outcome-driven trials (PEGASUS, PHILO, SOCRATES, and EUCLID). Finally, there are no reason(s) to believe that FAERS reporting has been biased towards ticagrelor, hiding unreported death cases for prasugrel or clopidogrel. Indeed, some cases are missing from FAERS, but the reporting here trends of death distribution will remain the same. Regardless, the consistency and magnitude of excess deaths after ticagrelor suggests that the excess mortality signal is real.