Hitting the sweet spot: Sialic acid sugars for the treatment of immune diseases and other disorders?

In addition to DNA, proteins and lipids, sugar molecules are essential building blocks for every living cell. There are many different types of sugar molecules in a cell which are linked to one another forming chain or tree-like sugar structures called glycans. Glycans can mainly be found on the cell surface where they are attached to proteins (glycoproteins) or lipids (glycolipids). Cell surface glycans vary enormously in size and composition and show a dazzling diversity and complexity. In humans and other mammals, many glycans have in common that they are capped with one particular type of sugar – sialic acid (Fig. 1). 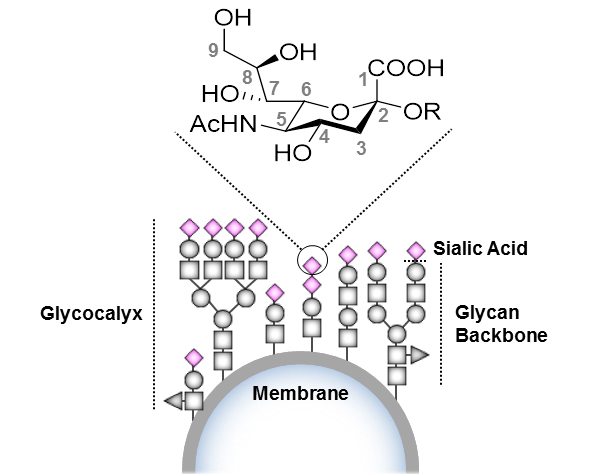 Fig. 1. A cell in which representative glycan structures on its cell surface are depicted as chains of squares and circles. The total collection of all glycans on the cell surface is called the glycocalyx. Sialic acids are depicted as purple diamonds and can be found on the outer end of glycans. The underlying sugars that form the glycan backbone for sialic acids are shown in gray. In the figure, the chemical structure of a sialic acid is shown. Sialic acids are sugar molecules with nine carbon atoms. By adding other atoms or small molecules to the carbons of a sialic acid, the binding to a Siglec receptor can be modulated. 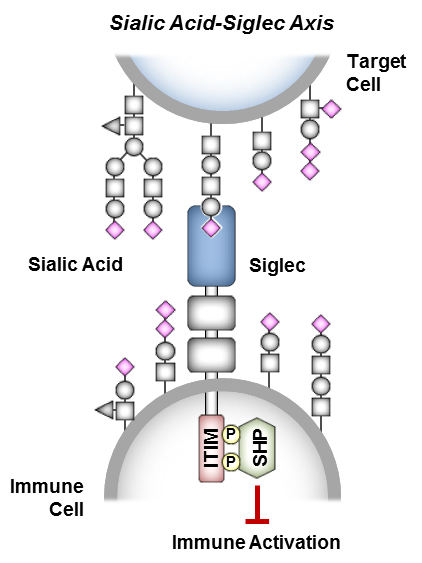 Fig. 2. Interaction between two cells via the sialic acid-Siglec axis is schematically represented. The upper cell represents a target cell (e.g. host cell, cancer cell) and the lower cell one an immune cell. The upper cell presents sialic acids (purple diamonds) that are recognized by Siglecs on an immune cell. When this happens, the intracellular part of the Siglec receptor containing an ITIM (immunoreceptor tyrosine-based inhibition motif) becomes phosphorylated (P) and recruits SHP proteins that inhibit immune cell activation. In other words, sialic acid recognition by the Siglec receptor gives negative signals to the immune cell. Thereby, the sialic acid-Siglec axis dampens immune cells and the immune system.

Siglecs are not exclusively expressed on immune cells, they can also be found on bone cells (osteoclasts) or neural cells (microglia cells) which are involved in bone or brain maintenance, respectively. Failures in sialic acid-Siglec interactions have been linked to bone disease (osteoporosis) and neurological diseases like Alzheimer’s disease. As many aspects regarding sialic acids and Siglecs are still poorly understood, it may be extremely rewarding to study the sialic acid-Siglec axis in health and disease in greater detail and to develop novel therapies that can modulate it.