Endocrine Disruptor Compounds (EDCs) are molecules, natural or synthetic, that happen to interfere with the endocrine network of vertebrates, provoking adverse dysregulation of the hormonally – controlled physiological parameters or functions. This interference can occur through different mechanisms either directly by binding to the hormone receptor, or indirectly by increasing or decreasing the concentration of endogenous hormone(s).

1/ the most direct one is an interaction of the EDCs with an hormone receptor leading either to stimulation (A) or inhibition (A) of downstream cellular pathway in target cells or 2/ endogenous active hormone concentrations can be affected by stimulation or inhibition of either their synthesis (B), or degradation (C), or availability (D). 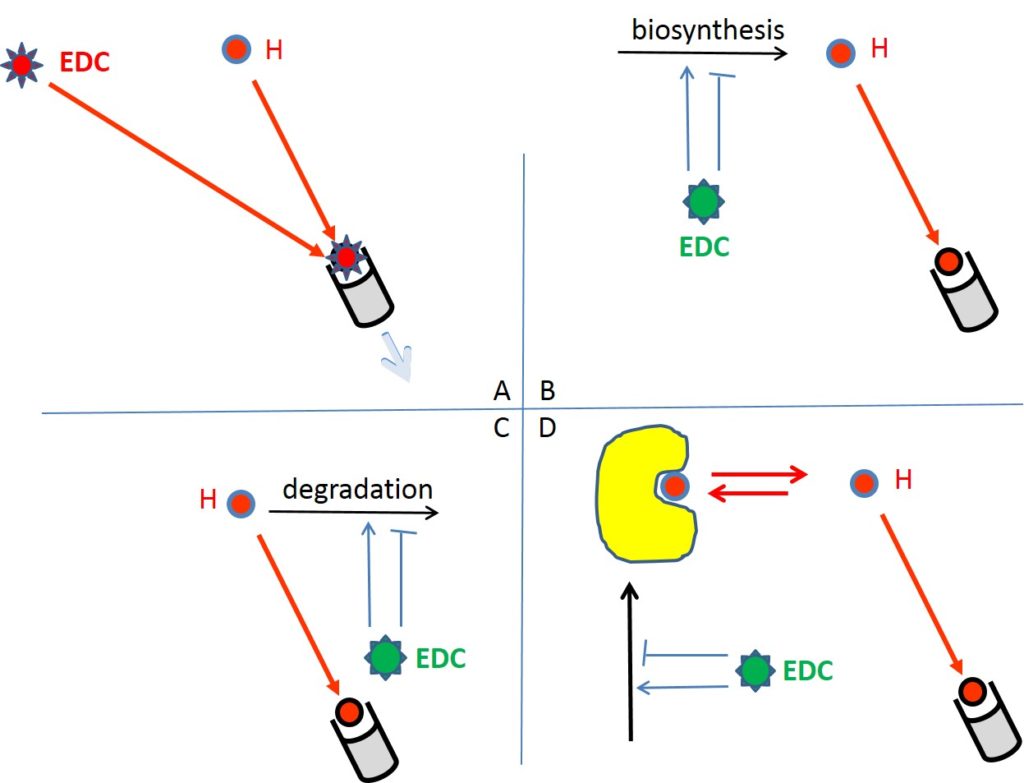 New organic molecules have been produced in larger and larger numbers and quantities over the last century. Many in vitro tests have been set up to detect direct potential stimulating or inhibiting effects of EDCs on the transcriptionnal activity of nuclear receptors. For example, a large survey of 200 pesticides in in vitro transcriptionnal tests for six different receptors (hERα, hERβ, hAR, hPXR, mPPARα, mAhR) showed that 47 of them exhibited hERα-mediated action and 33 had hERβ-mediated action. As much as 106 out of the 200 exhibited agonist activity in hPXR-dependent systems. It is interesting to point out that the PXR is the nuclear receptor with the most voluminous binding pocket (≥ 1200Å3) thus susceptible to accommodate a larger number of molecules and also, larger molecules.

The evolution of nuclear receptors structure has been restricted by the need for specifically recognizing only their cognate hormone but, also by the need for NOT binding to another circulating molecule. The problem with the recent and sudden arrival of thousands of small industrial organic molecules is that the nuclear receptors have not been selected during Evolution to avoid low-affinity binding to them. Therefore, a certain percentage of these new synthetic molecules can, more or less, accommodate the receptors binding site and promote receptor activation or inactivation; i.e. these molecules act as endocrine disruptors. Moreover, conjugating and degrading systems have also been set up during Evolution to limit the half-life of hormones whereas synthetic molecules can remain unchanged and potentially accumulate in the body.

As for all other forms of toxicity, it is important to consider both the potential hazard of all suspected molecules as thoroughly as possible in order to evaluate the risk for human and/or wildlife populations. In this prospect, it is important to consider 1/ exposure of populations to the chemical under study, 2/ the dose-responses of its effects and 3/ the cocktail effect.

Non-monotonous dose-responses are sometimes claimed as a hallmark of endocrine disruptor effects. The observation in some experiments, of U-shape dose-response curves where low doses of chemical exhibit higher effect than medium doses, and comparable effect with high doses cannot be attributed to intrinsic properties of endocrine disruptors. Indeed, it is rather due to the complexity of endocrine regulations in animals and depends on the chosen end-point for the study of the effect(s). The EDCs exhibit low affinity and low specificity towards their target-proteins. Indeed, they generally bind to one or several proteins (receptors, binding proteins, conjugating enzymes etc…) susceptible to affect animals’ endocrine system. Their positive and negative effects at different sites can thus lead to non-monotonous responses, eventually different depending on the chosen endpoint.

Endocrine disruption is a mild but insidious form of toxicity so that it is often difficult to prove or reject its involvement. The complexity of endocrine regulations in vertebrates together with the high number of new synthetic molecules, render the task of determining the endocrine disrupting risk for each molecule, enormous and often contradictory. For these reasons, a classification of molecules under study per mechanism(s) of action on endocrine regulations would be helpful to reduce the number of assays needed to validate endocrine disruption and take into account potential additive, synergistic or counteracting cocktail effects.